"Even fewer sovereign decisions": why the EU decided to admit the US, Canada and Norway to its defense program

By securing the membership of the United States, Canada and Norway in the EU Member States' Permanent Structured Security and Defense Cooperation (PESCO) program, Europe is "giving up its security identity." This opinion is shared by the experts requested by RT. Earlier, the Council of the European Union decided to admit Washington, Ottawa and Oslo to PESCO. NATO welcomed this decision, and the head of European diplomacy, Josep Borrell, said that this step would help strengthen cooperation between the European Union and NATO "in the field of army mobility." According to analysts, a kind of "political exchange" took place, when the United States makes concessions to the EU on contributions to NATO, and Washington gets the opportunity to control the union from within. 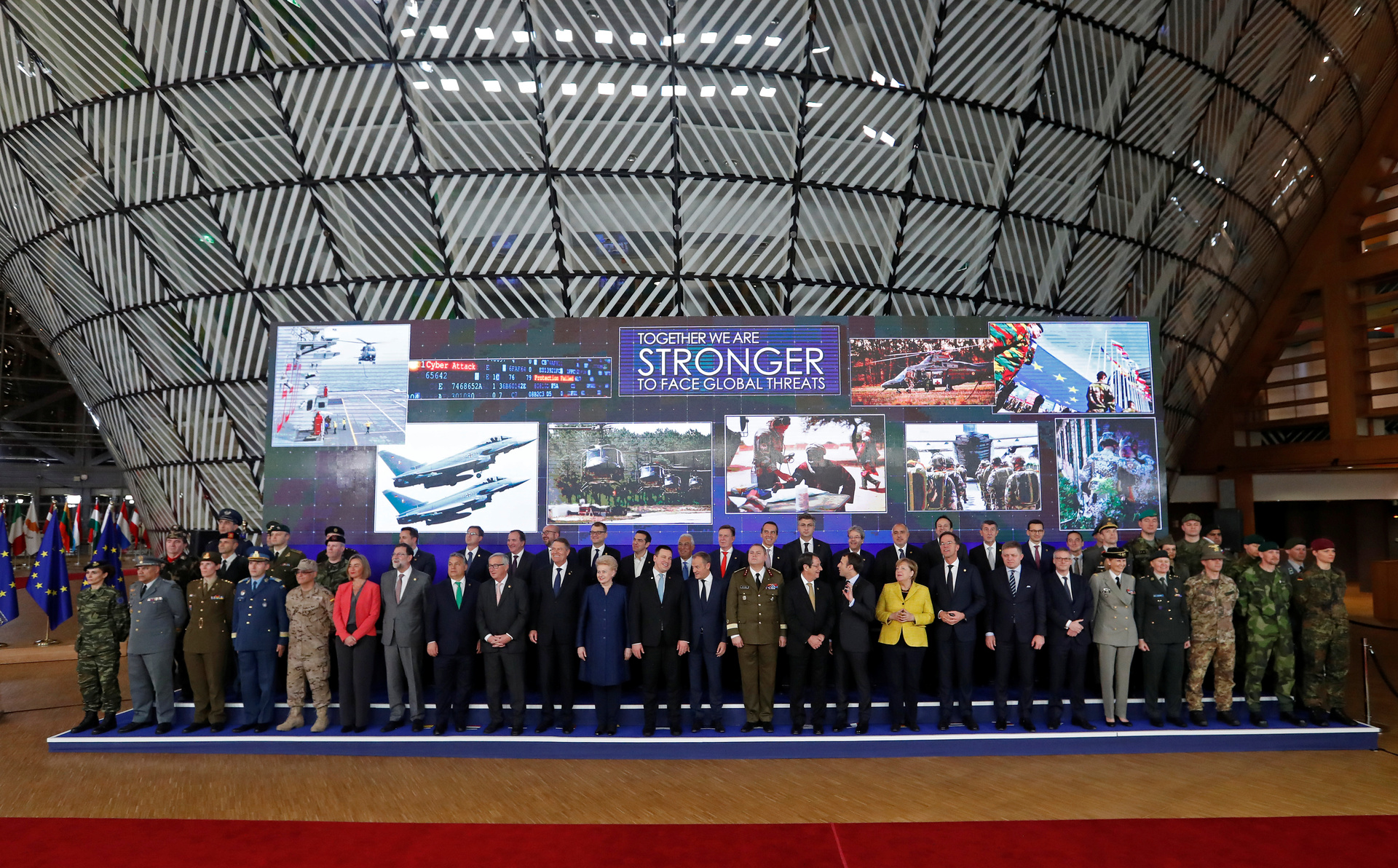 By securing the membership of the United States, Canada and Norway in the program of Permanent Structured Cooperation in the Field of Security and Defense (PESCO) of the EU member states, Europe "renounces its subjectivity in the field of security," experts interviewed by RT say.

“Brussels says with this step that it will make even fewer sovereign decisions.

A kind of takeover is taking place, since PESCO with the United States and without this country are two completely different programs with separate goals and objectives, "said Nikita Danyuk, member of the Public Chamber, First Deputy Director of the Institute for Strategic Studies and Forecasts of RUDN University, in an interview with RT.

According to him, approval of the participation of non-EU NATO countries also means that the idea of ​​creating a European army - an institution that would be responsible within Europe for security, defense and maximum independence from Washington and NATO, “failed”.

“Because earlier, within the framework of PESCO, European politicians really tried to create a kind of structure that would allow Europe to become more autonomous and independent in terms of security.

Now, the inclusion of the three countries of the alliance in the program suggests that all the processes that hypothetically can take place in Europe, they will still take place under the strict supervision of the United States and NATO, "the analyst believes.

We will remind, earlier, on May 6, the Council of the European Union decided to admit Washington, Ottawa and Oslo to the European program of Permanent structured cooperation in the field of security and defense.

“In response to requests from Canada, Norway and the United States to participate in the PESCO Military Mobility project, the Council today made a positive decision, authorizing the coordinator of this project, the Netherlands, to invite these three countries,” the statement said.

In turn, Secretary General of the North Atlantic Alliance Jens Stoltenberg welcomed the decision, saying that "NATO countries outside the EU play an important role in the defense and defense of Europe."

“Right now, during my speech, as part of the exercises (Defender Europe 2021. -

), we are transferring several thousand troops to Romania.

It is a testament to how we mobilize and train NATO troops and our ability to move them across Europe.

Military men from the USA, Great Britain, Turkey are taking part in these maneuvers.

All this confirms the importance of operational mobility in Europe, ”commented Stoltenberg on the involvement of the three member countries of the alliance in the European security program.

Position of the head of EU diplomacy

The EU High Representative for Foreign Affairs and Security Policy Josep Borrell appreciated the accession of the USA, Canada and Norway to the PESCO program.

In a blog post on the website of the European External Action Service (EEAS), he stated that the move would help strengthen EU-NATO engagement “in the area of ​​army mobility”.

“The Ministers adopted three decisions of the European Council that will allow the United States, Canada and Norway - three key EU partners and NATO allies - to participate in the PESCO project aimed at strengthening the mobility of the army, and bring to it valuable experience and best practices.” he noted.

At the same time, Borrell proposed the implementation of three directions for increasing the efficiency of the operational interaction of the EU member states.

First, he believes it is necessary to “make decisions faster” and ensure that EU missions and operations have the necessary means “to play a meaningful role on the ground”.

“I am convinced that we need more solidarity among member states in many areas of EU policy, as well as in our missions and operations within the framework of the Common Security and Defense Policy,” said the head of European diplomacy.

"If the Europeans benefit from it, it is wise for everyone to do their fair share."

The second aspect that the European Union needs in the field of defense, Borrell called "more flexibility."

“A good example is our work on the so-called 'coordinated maritime presence', when EU member states exchanged information collected by national naval assets,” he explained.

The third direction, according to Borrell, should be the readiness to "more quickly deploy" EU missions and operations in different parts of the world.

As part of this aspect, he presented an idea for "early stage forces" "that could be deployed quickly at the start of a crisis."

“Such a force would consist of approximately 5,000 troops (ground forces combined with naval and air components, as needed).

The backbone of these forces can be the EU militant group, a formation of 2,500 troops, standing ready to defend the EU, and rotating every six months, ”explained the High Representative of the European Union for Foreign Affairs and Security Policy.

Recall that Brussels has been implementing its defense programs through the Permanent Structured Cooperation in the field of security and defense since 2017.

25 states of the European Union have joined the program.

"A kind of takeover"

According to Nikita Danyuk, the desire of the United States to join PESCO together with the other two partners in the bloc is explained by their fears that the EU will more actively defend its positions and "get out of their control."

“Washington is very much afraid that these centrifugal security and defense trends within Europe will gain momentum.

And in order to prevent this, the United States wanted to participate in PESCO, ”the expert noted.

In turn, Vladimir Schweitzer, head of the department of social and political research at the Institute of Europe of the Russian Academy of Sciences, believes that the NATO countries, headed by the United States, which are not members of the EU, “are taking advantage of the situation when relations between the European Union and Russia have worsened against the backdrop of all sorts of insinuations from European colleagues.

"With their requests to participate in PESCO, the United States and two other countries want to emphasize the unity of the North Atlantic Alliance, with the military component coming to the fore," he said in a comment to RT.

In this situation, the European Union "preferred to lend a hand to the Americans," Schweitzer stated.

According to him, now Europe does not have enough money to fight the pandemic, so part of the funds will be transferred from military budgets.

“Based on this, Brussels is interested in Washington, Ottawa and Oslo to finance European defense projects, as well as certain military activities,” the analyst explained.

Nikita Danyuk called the decision of the EU Council a "political exchange", when the United States temporarily writes off the EU's debts under NATO, and Washington becomes involved in the internal processes of Europe "and takes them under its control."

“After all, the European Union is not going to pay the designated 2% of GDP for the needs of the North Atlantic Alliance, although the bloc is now in a very difficult situation, especially after the presidency of Donald Trump, who did not consider work on this line his priority,” he explained.

At the same time, Danyuk stressed that all Borrell's statements about plans to strengthen European defense "are nothing more than a declaration."

“The head of European diplomacy is trying to say in this way that, despite the inclusion of three NATO countries in PESCO, Brussels will allegedly continue to integrate the European armed forces and take other measures.

However, these initiatives are absolutely sham, they are realizable only on paper, since the US and NATO will not allow this, ”he concluded.