The first stage of the Longue-Marche 5B rocket is due to make its debut this weekend. Debris should crash on land or at sea. But we don't know where or when. Why so many ... 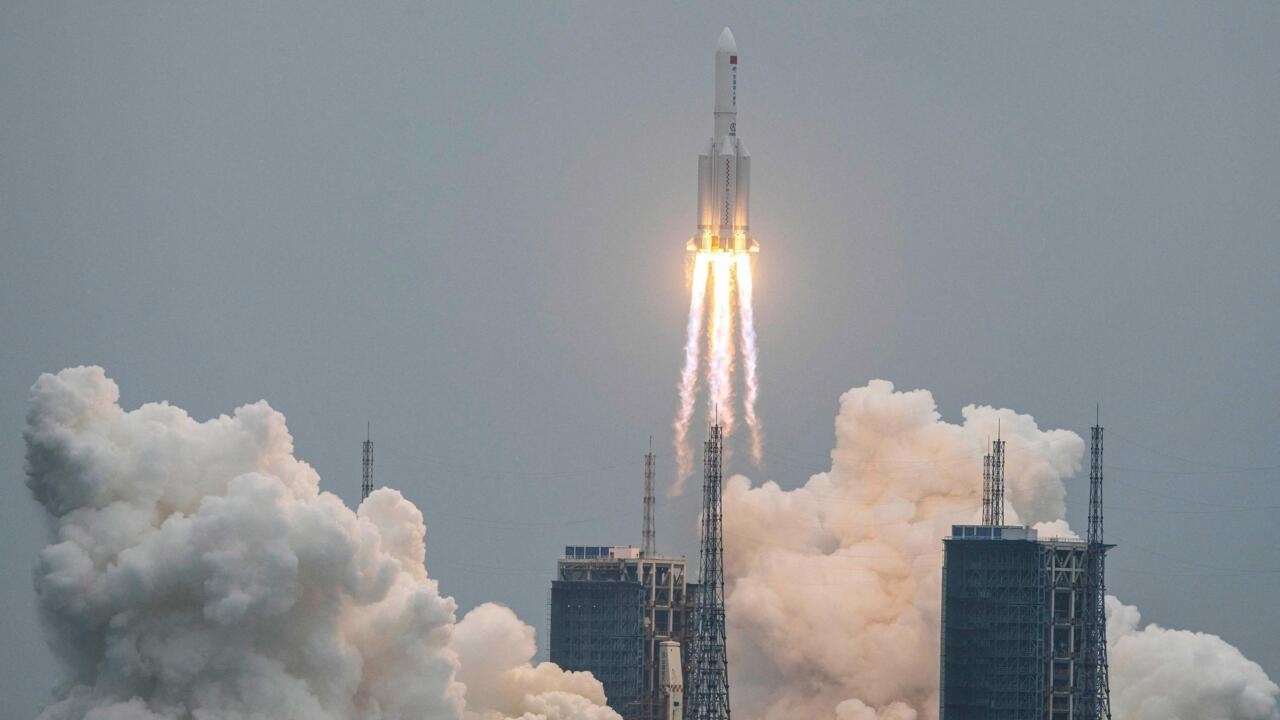 They will probably make their return to the atmosphere on the night of Saturday 8 to Sunday 9 May.

Around three in the morning, but with a generous 12-hour margin of error.

These are the latest estimates from the European Space Surveillance Program on the path of the remains of the Chinese Long-March 5B rocket, which has been making an “uncontrolled” descent to Earth for nearly a week.

#EUSST keeps on monitoring the re-entry of object CZ-5B R / B.

Estimates about location of re-entry will vary significantly until last hours.

This return to Earth is followed very closely by all the space agencies in the world.

The White House even indicated, Wednesday, May 5, that NASA was doing everything not to lose sight of the remains of the Chinese rocket.

About 30 meters long for more than 20 tons

Longue-Marche 5B took off last April to install the first part of the future Chinese space station in space. It is the first stage of this Chinese launcher which falls inexorably towards the atmosphere and is currently moving in orbit around the Earth at a speed of more than 27,000 km / h.

This space debris, about 30 meters long and weighing more than 20 tons, is one of the largest to return to Earth for more than thirty years. And no one knows exactly where he will end his race. Hence the fear that it will strike an inhabited area. Last year, debris from another Longue-Marche 5B rocket crashed in Côte d'Ivoire, causing damage to several buildings. "We hope it falls somewhere where it doesn't harm anyone, in the ocean or somewhere like that," said Lloyd Austin, the US Defense Minister.

Beijing did not appreciate this American exit capable of maintaining an anxiety-provoking climate around the final tomb of the remains of its rocket.

"The probability of causing damage is extremely low and the majority of [the rocket's] components will be burned and destroyed upon re-entry into the atmosphere," said Wang Wenbin, a spokesman for the Chinese Foreign Ministry.

China is not wrong.

When a space object enters the atmosphere at very high speed, friction with an “increasingly dense environment causes a strong heat capable of destroying it completely”, specifies the site Spacenews.com.

This is, in any case, what happens with the small debris.

But not necessarily with a machine the size of the first stage of the Longue-Marche 5B rocket.

“By comparing it to other objects analyzed, we can estimate that 20% to 40% of its mass will survive passage through the atmosphere,” said Holger Krag, director of the space debris department at the European Space Agency, interviewed by the Guardian.

It is therefore up to nearly 10 tons of rocket remains that will crash on Earth… or at sea. “That is the equivalent of the crash of a small plane, the debris of which would fall within a radius of about 160 km ”, specifies Jonathan McDowell, astrophysicist at the Center for Astrophysics at Harvard University, interviewed by CNN.

A question of probabilities

Enough to do significant damage if an inhabited area was affected.

At present, the most likely location of the future crash would be in the Pacific region at the equator, a strip stretching from the east coast of Africa to the west coast of Africa. South America through northern Australia, according to Aerospace Corp, a Californian NGO that advises the US administration on space issues.

A more precise calculation is impossible, because at the speed at which the remains of Long March 5B move, the smallest error in the estimation of the point of entry into the atmosphere can cause “a difference of several tens of thousands of kilometers, ”emphasizes Jonathan McDowell.

For him, the risk of such an impact should no longer be relevant in 2021. In the 1970s, at the start of the conquest of space, Soviet and American machines similar in size to the first stage of the Long-March 5B rocket have indeed made resounding returns in the atmosphere to come crashing down on Earth. But the technology has advanced enough that “space agencies can design the central part of their rocket in such a way that it doesn't end up in orbit around Earth,” says Jonathan McDowell.

These machines are then left adrift far from terrestrial space or in orbit of another star such as the Moon.

They can also be equipped with clean thrusters that allow teams on Earth to control their descents in order to "direct them to sea areas far from any home," notes the BBC.

There is even a geographical area of ​​predilection for this kind of operations - called the pole of inaccessibility - "which is in the South Pacific between Australia, New Zealand and South America", specifies the chain. British.

“But the Chinese seem not to have wanted to bother with these details.

They preferred to bet on the probabilities since more than 70% of the globe is covered with water ”, regrets Jonathan McDowell.

And this is a problem that is likely to worsen as the space is occupied by a growing number of actors. More and more countries and private companies are sending satellites or rockets into space, and most of the time launchers leave scraps there. “There are currently over 9,000 tonnes of debris in space, and the problem is that we don't have an accurate map of where they all are,” CNN notes. The overwhelming majority of them are too small to pass the obstacle of the atmosphere if they were to fall back to Earth. But what if more countries with nascent space ambitions emulate the Chinese example and agree to play dice with space debris?