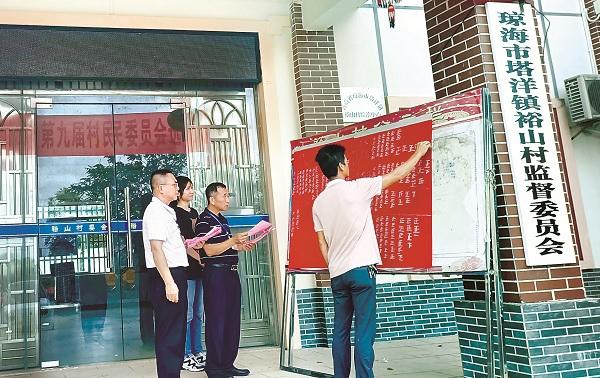 Resolutely investigate and punish behaviors such as canvassing votes, bribing elections, buying and selling officials, running away from officials and demanding officials, etc.

On April 22, at the 9th Villagers’ Committee Election Conference in Yushan Village, Tayang Town, Qionghai City, Hainan Province, the town’s Disciplinary Committee focused on key links to conduct supervision and create a clean and upright environment for the election.

"During the change of the party branch in Shijiawan Village, Jiapo Street, Xi'an City, Li Jing was the party branch secretary of the campaign village, and Guo Wenchao was the deputy secretary of the campaign village party branch. The two jointly contributed funds and successively gave 10 party members or their family members 30,000 yuan each. Canvassing votes and verbally greeted other party members to canvass votes." In mid-April, the Shaanxi Provincial Commission for Discipline Inspection publicly notified five typical cases of violations of the disciplinary rules during the election of the "two committees" in the village (community) recently investigated and dealt with. These problems or illegal canvassing. Or falsification, or illegal dinner parties, are all dealt with seriously.

The Provincial Commission for Discipline Inspection and Supervision used local investigations to carry out warning education, reminding cadres and related personnel in key positions to take the lead in strictly observing the change of discipline.

The Fifth Plenary Session of the 19th Central Commission for Discipline Inspection emphasized the strict and strict change of the discipline, the implementation of the discipline inspection and supervision organs must listen to their opinions, reflect the specific and traceable clues, and resolutely investigate and deal with canvassing, bribery, and buying and selling of officials. , Run official to be official and other behaviors.

Discipline inspection and supervision agencies at all levels earnestly fulfill their supervisory responsibilities, focus on issues, follow up throughout the process, enforce discipline with an iron fist, and be serious about accountability, resolutely maintain the authority of the renewal discipline, and create an environment for a clean and positive renewal.

"In Nanxiang Village, individual party members and villagers gathered for non-organizational activities such as election assistance, in order to interfere with the election of the village committee." In January this year, the Commission for Discipline Inspection of Longdong Town, Xiangxiang City, Hunan Province formed a special inspection team in time after receiving reports from the masses. Visited and investigated, after research and judgment, the case was filed for review by Li and others as soon as possible.

In less than one month, the relevant personnel were punished by staying in the party for one year for probation.

The quick investigation and conclusion of issues involving letters and visits for the change of office has benefited from the work mechanism for the transfer of clues established by the Hunan Provincial Discipline Inspection and Supervision Agency.

In response to frequent campaigns and elections during the election period, the Provincial Commission for Discipline Inspection issued the "10 Measures for the Supervision of the Ethics of the Election" and other regulations. For violations of the discipline of the election, it will be dealt with first, prioritized, and set up a special project. Check it out quickly.

Up to now, the discipline inspection and supervision organs at all levels in the province have accepted 2,303 clues on disciplinary violations, dealt with 2,303, verified 526, and dealt with 836 people, of which 154 were punished by party discipline and government, and 682 were organized and dealt with.

In general elections at the grassroots level, the quality of selection and employment must be strictly controlled.

"Through the joint examination and investigation, it was discovered that Liu had violated integrity and discipline during his tenure as the secretary of the village party branch, and he could not be listed as a candidate for the election of the village's two committees." This is the case from the Tianjin Binhai New District Discipline Inspection Commission to the District Committee not long ago. Integrity opinions fed back by the Organization Department.

The district’s Commission for Discipline Inspection insists on putting political standards in the first place, closely following the critical link of qualification review. The Party’s Work Style, Political Style Supervision Office, in conjunction with the Case Management Office, the Letters and Visits Office and other functional departments, will conduct a joint review of the pre-review list for the general term, and follow the clues to the issues. , Letters and visits, supervision and inspection, review and investigation, sanctions, etc. to provide opinions.

During the change of term, a total of 4,413 person-times of integrity reviews were completed.

In the issue clue verification, a quick investigation and quick handling work mechanism was established, and the case file review and inspection were carried out on the handling of all the issue clues involved.

22 clues regarding the suspected violations of discipline and law by 37 candidates for election have been investigated.

Discipline inspection and supervision agencies at all levels focus on key areas in key areas to carry out supervision, strengthen analysis, research and judgment, and conduct risk investigations on issues related to the change of term, so as to achieve targeted and precise supervision.

Fushun City, Liaoning Province took key links such as “one-shoulder challenge”, “one promotion and one down”, and “cross-service” as risk points for clean governance. It dispatched 52 supervision and inspection teams at the city and county levels to carry out 827 on-site supervision and inspections. The problem of sexual orientation should be grasped as early as possible, and rectification should be promptly urged.

Not long ago, Zheng Mou, a member of the Party branch and deputy director of the village committee of Dumu Village, Tanmen Town, Qionghai City, Hainan Province, violated work discipline when guiding the Jiamengling Village team to select village representatives and reported to the villagers without a village meeting. Representative, Zheng was advised to talk and deal with it.

In response, the Municipal Commission for Discipline Inspection and Supervision and the Organization Department of the Municipal Party Committee held a special discussion meeting on disciplinary supervision work to discuss the party committee secretaries, disciplinary committee secretaries, and organization members of the 12 towns in the city, as well as the municipal and village (community) "two committees" leadership group office. Have a collective conversation with all members of the itinerant steering group, report Zheng's violation of discipline, and further seriously change discipline.