Paris stands on the verge of the collapse of Lebanon .. The crisis of forming a government or a French crisis?

Many observers believe that the visit of the French Foreign Minister to Lebanon reflects the height of the French embarrassment and anger resulting from the inability of the political forces to conclude a settlement to produce a rescue government that was included in the French initiative. 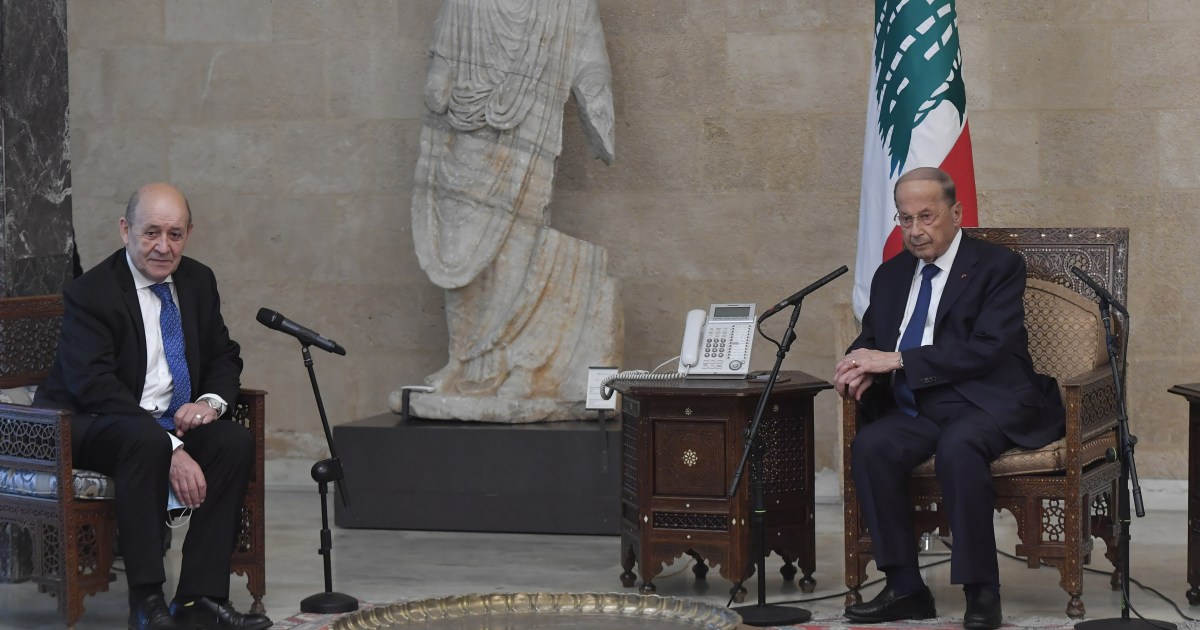 Many observers believe that the visit of French Foreign Minister Jean-Yves Le Drian to Lebanon reflects the height of French embarrassment and anger, resulting from the inability of the political forces to conclude a settlement to produce a rescue government included in the French initiative, launched by President Emmanuel Macron in September 2020 after he visited Lebanon twice after The Beirut Port blast took place on August 4, 2020, with Le Drian with him.

Within less than a year, the French Foreign Minister visited Lebanon 4 times to urge the authorities to implement reforms in exchange for the allocations of the International Cedar Conference held in Paris (April 2018), but his fourth visit shipped with a strong message about his country's approach to deal firmly with those who They obstruct the formation of the government.

Officially, Le Drian's meetings yesterday, Thursday, were limited to meeting with President Michel Aoun and Speaker of Parliament Nabih Berri, then Prime Minister-designate Saad Hariri went to meet him at night, and the one meeting did not last more than 40 minutes, without making statements after that.

On Friday morning, the National Information Agency quoted Minister Le Drian as saying in press statements that "the sanctions - recently announced against those who obstruct the formation of the government - are only the beginning of the road in the path of strict sanctions," and that "France will call on the international community to pressure the holding of parliamentary elections." In a timely manner, "stressing that" the Lebanese officials did not abide by the pledges they made to the French president. "

French Foreign Minister Jean-Yves Le Drian was wrong when he said that he wanted to prevent mass suicide in Lebanon.

He should have said, to prevent mass slaughter in Lebanon.

Most of the Lebanese did not choose to commit suicide.

Few of them want to commit suicide according to the directions of their leaders, but they also decided to kill everyone with them.

As for the striking reference, it was that Le Drian met for the first time with political groups from the October 17th movement, which were called "alternative political forces," and it appeared as a French admission of the existence of alternative forces for the pillars of the ruling class in Lebanon.

This meeting raised many differences between the civil powers themselves, as some refused to accept Le Drian's invitation on the grounds that France historically was a colonial country, and some powers resorted to it as a pressure card after its settlements with the politicians who caused the historic collapse of the country failed.

The writer and political analyst Hussein Ayoub considers that Le Drian's meeting with the movement's groups reflected the loopholes of the French initiative, after Paris suddenly decided to open up to forces that do not have an alternative, unified and reliable project, and are unable to mobilize a protest movement on the street against the authority.

Observers saw that the features of firmness and seriousness that Le Drian printed on his visit, concealed behind them the confusion and the inability of Paris to score points of success in the Lebanese file.

After France had threatened for weeks of European sanctions that would be imposed on the two obstacles to forming the government, the threat of sanctions from European to French has receded, without also disclosing who targeted them.

Ayoub believes in a statement to Al-Jazeera Net that the US sanctions previously imposed by the administration of former President Donald Trump on political figures from Hezbollah and its allies and the head of the Free Patriotic Movement, Gebran Bassil, did not bear fruit, and therefore the Prime Minister-designate Saad Hariri is the weakest link in the French equation, after he won Bassil is the "grand prize" with the US sanctions, and what is below them is neither offered nor delayed for him, and "the main thing is who will receive the French sanctions from Aoun's political team, even though they are sanctions that are similar to tax audits."

About 6 months have passed since Hariri was appointed to form the government on October 22, 2020, after Hassan Diab's government resigned following the port explosion.

But this assignment seemed like an impossible task, and turned into a card to manage the political battle between Hariri and Aoun, instead of saving the country that is plunging into an unprecedented collapse in its history.

The crisis in forming the government rolled from the dispute over sectarian quotas and what is known as the "blocking third", to the personal dispute between Aoun's son-in-law Bassil and Hariri.

According to Ayoub, Paris recognized this battle implicitly, and was seeking to gather Bassil and Hariri at the Elysee Palace, but the latter refused, and thus the sanctions may affect Hariri himself.

While France, on its initiative, is looking for a window to consolidate its historical role in Lebanon, which helped formulate its regime 100 years ago, Le Drian leaves Beirut without progress in the government file, pending what will be officially announced regarding sanctions after his return to his country.

Joseph Bahout, director of the Issam Fares Center for Public Policy and International Affairs at the American University of Beirut, believes that the government crisis masks a French crisis based on several defects:

First, the French initiative appeared, from its inception, to lack international and Arab coverage.

Secondly, the fragile elements of the initiative plunged France into Lebanese contradictions, such as accepting the representation of sectarian forces in a government that gave it the status of "specialists and non-partisans", and that Hariri is the only representative of this government.

Third, the initiative lost its momentum, and the political forces that mastered the art of playing on time felt not serious.

The Lebanese analyst Joseph Bahout finds that Le Drian's visit took the character of the last reprimand for the Lebanese political forces, and in its content it may imply the end of the French initiative, in a way that saves Paris first.

The Lebanese analyst finds that Le Drian's visit took the character of the last reprimand for the Lebanese political forces, and it contained in its content the hint of the end of the French initiative, in a way that saves Paris first.

With caution, he should not lose sight of linking the fate of the formation of the government to the pace of regional developments, specifically in relation to the Vienna talks between Iran and America on the nuclear file, and in Baghdad between Saudi Arabia and Iran, as well as the new Syrian-Saudi meetings.

He pointed out that the settlement process in the region might push the Lebanese forces to resume their bet on time, "because there are prices that must be paid."

However, Hussein Ayoub finds that what is happening in Baghdad and Damascus is just an echo of the Vienna talks, and therefore the main regional issue that benefits or harms Lebanon is the path of the possible agreement between Washington and Tehran, and if it succeeds, then Lebanon will have an opportunity, provided it is prepared for it.

Apart from that, there is no government in the short term, and the possibilities of Hariri’s apology for assigning the formation of the government, according to Ayoub, are contained, after he became embarrassed for several reasons, including the absence of a unified Arab position between Saudi Arabia, which rejected Hariri’s mandate, and Egypt and the Emirates, which defend his mandate, but Without firm foundations, and the signing of the decree forming the government is in the hands of Aoun, who is standing in front of him.

As for Hezbollah, which is monitoring talks in the region, it is with its ally, Amal Movement, that they have a fundamental concern, that no step will lure the country into a Sunni-Shiite strife. Therefore, "the Shiite duo seems to be the most eager to assign Hariri to preserve sectarian balances," Ayoub adds.