"Global Oxygen Transport" is unable to distribute it. Where are the supplies that India has in hand?

China News Service, May 8th. According to data released by the Indian Ministry of Health on the 7th, India has added 414,188 new confirmed cases of new crowns in the past 24 hours, and more than 400,000 new cases have been added in a single day for two consecutive days. So far, more than 21.49 million people in India have been infected with the new crown virus, and more than 230,000 people have 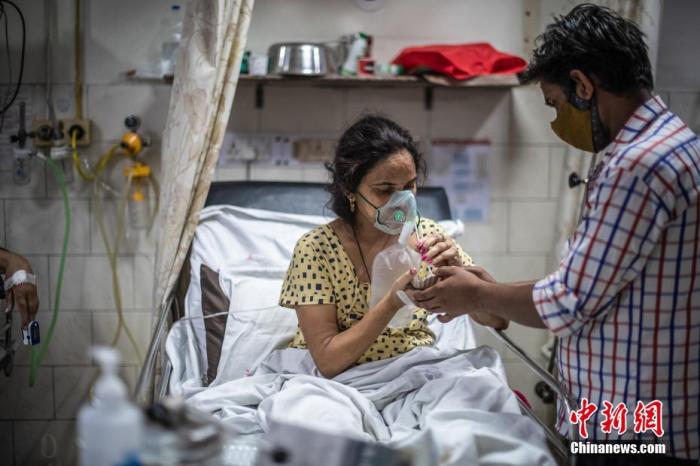 China News Service, May 8th. According to data released by the Indian Ministry of Health on the 7th, India has added 414,188 new confirmed cases of new crowns in the past 24 hours, and more than 400,000 new cases have been added in a single day for two consecutive days.

So far, more than 21.49 million people in India have been infected with the new crown virus, and more than 230,000 people have died.

Recently, global aid materials have flooded into India, but many hospitals have not received humanitarian aid for a long time. According to media reports, many aid materials have been stuck at the airport without being distributed.

Although the Indian government strongly denies the delay in distribution, local officials said that the central government "has kept all areas in darkness during the pandemic."

May 6, 2021 local time, New Delhi, India, taking care of patients with new coronary pneumonia in the ICU ward of the Holy Family Hospital.

[The epidemic is fierce, and the mutant virus is raging]

Vijay Rakovan, the chief scientific adviser to the Indian government, admitted that government experts had never expected the increase in the number of infections to be so fierce.

Lacovan said: "Given the large amount of virus being transmitted, the third phase (the third wave) will be unavoidable, but it is still unclear when the third phase will occur... We have to prepare for the new wave. epidemic."

Officials from the National Center for Disease Control of India said that the new coronavirus variant B.1.617 discovered in March may be the culprit of the current second wave of outbreaks.

The Indian health authorities genetically sequenced 13,000 test samples, of which the variant was found in more than 3,500 samples from eight states.

They also found that compared with the original virus, there were 15 sets of gene mutations in the B.1.617 variant.

Singh, director of the National Center for Disease Control of India, said that the number of infections in many places in India has increased sharply, which is "correlated with the emergence of the B.1.617 variant."

However, Singh also said: "Its epidemiological and clinical relevance has not yet been fully established... Without this relevance, we cannot associate it with any outbreak."

British experts also proposed to be vigilant against Indian variants.

The British Press Association (PA) reported that the United Kingdom will announce the inclusion of the B.1.617 series of variants on the "variant of concern" list.

However, a source from the Public Health Agency of England (PHE) told the British Broadcasting Corporation (BBC) that there is currently no evidence that the series of variants are resistant to existing new coronavirus vaccines.

On May 4, local time, in New Delhi, India, people wearing protective masks at the vaccination center waiting to be vaccinated with the COVISHIELD Covid-19 vaccine produced in India.

[There is a shortage of supplies, but aid is "sleeping" at the airport?

In the past period of time, emergency medical aid goods including oxygen and oxygen generators and respirators have been pouring into India from all over the world, but many supplies have been stranded at the airport, and many hospitals in India have not yet received such humanitarian aid.

CNN reported that for many days, many aid materials have been stuck in the airport hangar.

State officials told local media that the distribution of supplies did not begin until more than a week after the first emergency aid arrived.

However, the Indian government firmly denies that there are delays in the distribution of supplies.

In a statement on the evening of the 4th, the Indian government stated that it took seven days to introduce a "simplified and systematic mechanism" to distribute supplies.

The Standard Operating Procedure, which was issued on May 2, explains the guidelines on how to allocate aid, but it does not mention when the allocation will begin.

The Ministry of Health stated that it is "working around the clock to quickly track and distribute supplies" and has distributed nearly 4 million donated items to 38 health care institutions across the country, covering 24 categories.

The agency stated that Punjab has received 100 oxygen generators and 2500 doses of Redecive.

However, BBC reports show that in some of the most severely affected areas in India, state and local authorities claim that they still have not received any supplies, and even the central government has little or no communication on when and how they can get relief.

Rajasthan Health Minister Ragu Sharma said that the central government "has kept the states in darkness during the pandemic."

[Why did the second wave of the epidemic make India "surprised"?

The first wave of the epidemic in India reached its peak in September 2020, with a daily increase of about 90,000 cases.

By January and February of 2021, the number of confirmed cases in a single day has fallen to less than 20,000.

Although this shows that the epidemic is under control, it is not zero spread, but India can’t wait to announce that it has defeated the virus and reopened all public places and allowed gatherings.

The former Minister of Health of Maharashtra, Mahesh Zagard, said: “When the first wave slows down, they should prepare for the second wave and prepare for the worst. They should count the oxygen and Rydsi Wei’s inventory and increase production capacity.” However, India has begun preparations for the country’s largest religious event, the "Great Pot Festival" and local elections.

At the moment when India relaxed its epidemic prevention, the mutant virus began to wreak havoc there.

Singapore’s “Lianhe Zaobao” stated that India’s death case reporting mechanism has long been incomplete, especially in rural areas. The problem has worsened during the epidemic, and many people who died have not been included in the official figures.

The inability to know the true situation of the epidemic will not help the authorities fight the epidemic.

At the same time, many Indian officials are still denying reality.

Although many hospitals in India have to shut out patients due to lack of oxygen, and reports of people having to buy oxygen at ten times the price on the black market are not uncommon, Indian officials have repeatedly stated that there is no shortage of oxygen. Question, the Chief Minister of Uttar Pradesh also threatened to take action against hospitals that "spread rumors."