The US government supports an international proposal to temporarily abolish the patent rules for vaccines against covid-19. The EU is also signaling support. It is "a great moment in the fight against covid-19", according to the leaders of the World Health Organization, but the pharmaceutical industry is not happy. 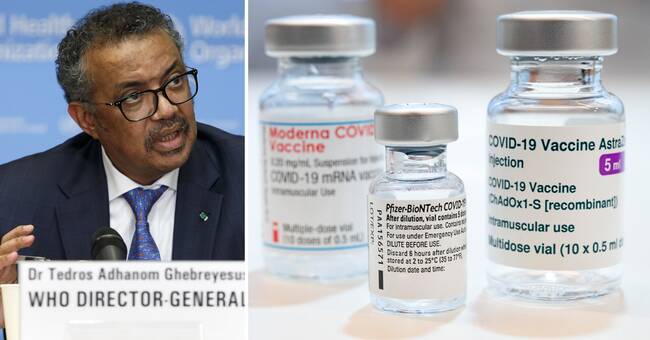 The fight to temporarily remove patent protection for covid-19 vaccines has been waged within the World Trade Organization (WTO) by mainly developing countries such as India and South Africa.

But both in the EU and the USA, where much of the research takes place, the fear has been what will happen to the desire to develop preparations in the future if the economic rules of the game change afterwards.

The United States is now in favor of temporarily removing patent protection during the pandemic, even though it reserves the right to delay negotiations.

The African Union pays tribute to the United States for taking the lead in the issue.

The US government's decision will go down in history as the right decision at the right time, the union's chief of infection control John Nkengasong announced at a press conference, according to AFP.

"The EU is ready"

The head of the World Health Organization (WHO), Tedros Adhanom Ghebreyesus, also describes the US message as historic.

The EU also receives positive signals about the proposal.

"The EU is ready to discuss all proposals that address the crisis effectively and pragmatically," European Commission President Ursula von der Leyen said in a speech on Thursday.

However, it may take several months before the proposal becomes a reality, as it will be considered by the WTO, where all 164 member states must agree.

However, it seems that a majority is in favor.

However, the pharmaceutical industry argues against and argues that abolished patent rules had not made any difference in terms of access to vaccines.

The international lobby group IFPMA describes the proposal as an "incorrect solution to a complex problem".

Anders Blanck, CEO of the Swedish industry organization Lif, announces that he assumes that Sweden will continue to be opposed.

"The abolition of the patents on vaccines against covid-19 would have unforeseen negative consequences for all future development of drugs and vaccines," he states according to a press release.