230 million visits exceeded the pre-epidemic level! The familiar "May Day" is back

Chinanews client, Beijing, May 6th (Reporter Li Jinlei) The five-day "May 1st" holiday passed in a flash. With the reappearance of "people conformity", the familiar "May 1st" came back. The picture shows the Yellow Crane Tower Scenic Area in Wuhan welcomes many tourists. Photographed by Zhang Chang 230 million people traveled, exceeding the level before the epidemic!   As expected before the 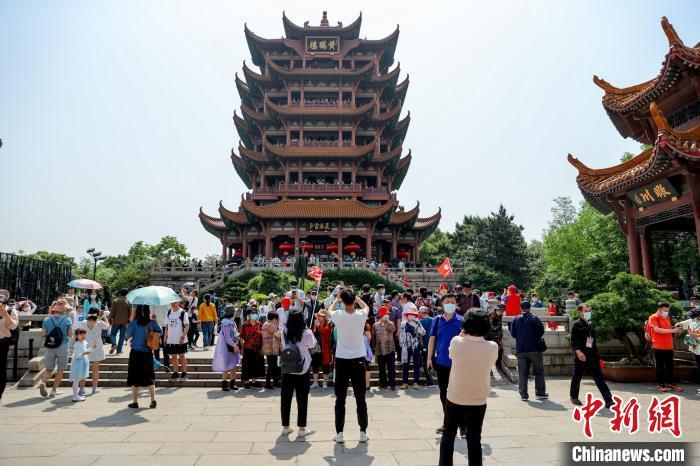 Chinanews client, Beijing, May 6th (Reporter Li Jinlei) The five-day "May 1st" holiday passed in a flash. With the reappearance of "people conformity", the familiar "May 1st" came back.

230 million people traveled, exceeding the level before the epidemic!

As expected before the holiday, this "May Day" holiday really ushered in a compensatory outing.

According to calculations by the Ministry of Culture and Tourism, during the May 1st holiday in 2021, 230 million domestic tourists traveled nationwide, a year-on-year increase of 119.7%, and on a comparable basis, it returned to 103.2% of the same period before the epidemic.

This means that the number of tourists during the "May 1st" holiday has exceeded the level of the same period before the epidemic.

The scenic area is crowded with people, and there are long queues on the expressway. #巴达岭长城 Scenic area issued a tourist flow warning##杭州西湖断桥变人桥##西安terracotta warrior , This makes everyone sigh: the familiar "May Day" is back!

It is indispensable to spend money when going out to play.

According to calculations by the Ministry of Culture and Tourism, during the May 1st holiday in 2021, domestic tourism revenue will be 113.23 billion yuan, a year-on-year increase of 138.1%, and on a comparable basis, it will be restored to 77.0% of the same period before the epidemic.

A family of 4 family trips cost about 20,000 yuan, Hainan outlying islands sold for 294 million yuan in two days without tax... The surging tourists and strong purchasing power made the tourism industry smile.

Data from a number of online travel platforms show that the number of orders has reached a new high.

Among them, Ctrip's "May 1st" Golden Week total order volume increased by about 270% year-on-year, compared with an increase of more than 30% in the same period in 2019.

Beijing, Shanghai, Chengdu, Guangzhou, Chongqing and other cities are the most popular for tourists. Among them, Chengdu tourists spend 2600 yuan per capita on air tickets and hotels, becoming the city with the most per capita spending. Beijing and Shenzhen are ranked second with 2448 yuan and 2442 yuan respectively. , Three.

Lan Xiang, dean of the Qunar Big Data Research Institute, said that although he had anticipated the popularity of the May 1st period this year, being able to break the single-day booking record still excites the entire tourism industry, and the domestic tourism industry has shown a good cycle. situation.

This shows that not only has the national travel consumption demand not decreased, but has been further stimulated by the control of the epidemic, which has also injected a boost for the recovery of the entire tourism industry.

The picture shows tourists playing in the Yellow Crane Tower.

Traveling after 00 increased by 2.5 times

During this "May Day" holiday, "Generation Z" has risen, and young people, especially those born in the 00s, travel very hotly.

According to Qunar data, among the people traveling on May 1st this year, the post-90s accounted for more than 50%, becoming the absolute main force, of which the post-95s accounted for 23%.

Post-00s have become the fastest growing and most energetic group of travellers.

It is worth noting that destination cities such as Wuhan, Tianjin, Chongqing, Jinan, Qingdao, Changsha and other destination cities after 00 have booked more than 70 people for the first time, making them the third largest tourist group.

Lan Xiang said that judging from the May 1st holiday this year, the 20-25 year-old generation has fully emerged.

It is foreseeable that in the future tourism market, the post-95s and post-00s generations will not only promote the continuous growth of tourism demand, but also promote the further development of the entire tourism industry towards diversification and individualization.

On May 3, tourists play at the beach in the Nanshan Cultural Tourism Zone in Sanya.

Pay attention to quality and become a trend

During the "May 1st" holiday, tourists pay more attention to the quality of leisure and vacation travel, and privacy, customization, and miniaturization have become the mainstream.

High-star hotel listings are favored by tourists. The characteristic room types of popular Internet celebrity hotels in Changsha, Xi'an, Hangzhou, and Chengdu are hard to find. High-grade holiday homes in Hangzhou, Qingdao, Changsha and other places have higher occupancy rates. The order was even scheduled to the end of June.

The monitoring data of the national tourism supervision service platform shows that the average number of "May 1" team tours is 14.67 people, a decrease of 25% compared with 2019, and the trend of small group tours is obvious.

On May 1, the first day of the "May Day" holiday, tourists in the scenic spot of Chongqing Fuling Red Wine Town took a ride to experience the amusement facilities.

The trend of tourism sinking is obvious

Under the normalization of the epidemic, tourists take the initiative to travel at different peaks, and third- and fourth-tier cities have gradually become more tourist destinations.

More and more tourists choose to feel quiet and leisurely in the mountains and rivers and fields, and experience the slow life in the countryside. Experiential tourism projects such as mountain climbing, flower viewing, picking, barbecue, and fishing are welcomed.

Big data monitoring by the Ministry of Culture and Tourism shows that the travel rate of residents in rural areas is 14.3%, and the proportion of farmers participating in tourism is increasing.

The climate in the central and western regions is suitable. Outings, natural scenery appreciation, gourmet food and online celebrity check-in have attracted many tourists, and the tourism market has become increasingly popular.

The Ministry of Culture and Tourism stated that this year is the 100th anniversary of the founding of the party, and the red theme tour is very popular.

Ctrip data shows that the "red travel" keyword during the "May Day" period increased by about 7 times compared with the same period in April.

The maturity of night lighting, exhibition and other technologies provides tourists with more possibilities for night travel, and night consumption has become the new normal.

Consumers are willing to explore the streets and landscapes of the city at night to discover the other side of the city, and they are also willing to look for "late night canteens" in alleys and alleys.

Night tours such as Wuhan’s "Labor's Most Glory" theme light show, "Zhiyinhao" and "Yellow Crane Tower at Night" are highly sought after.

Have you been out to play this "May 1st" holiday?

how much did you spend?