"Our drugs are the most reliable and safe": the Sputnik Light vaccine is registered in Russia

The fourth domestic vaccine against coronavirus has been registered in Russia - Sputnik Light, which is essentially the first dose of Sputnik V. This vaccine is primarily intended for export and the rapid formation of population immunity in countries with an unfavorable epidemic situation, said the head of the RDIF Kirill Dmitriev. However, it can be used both for revaccination and to increase efficiency when combined with other vaccines, said Alexander Gintsburg, director of the Gamaleya Center. Speaking about the effectiveness and safety of domestic drugs against coronavirus, President Vladimir Putin stressed that they are based on well-known technologies that have been used for decades. The head of state added that, according to one of the European experts,Russian vaccines against COVID-19 are as reliable as a Kalashnikov assault rifle. 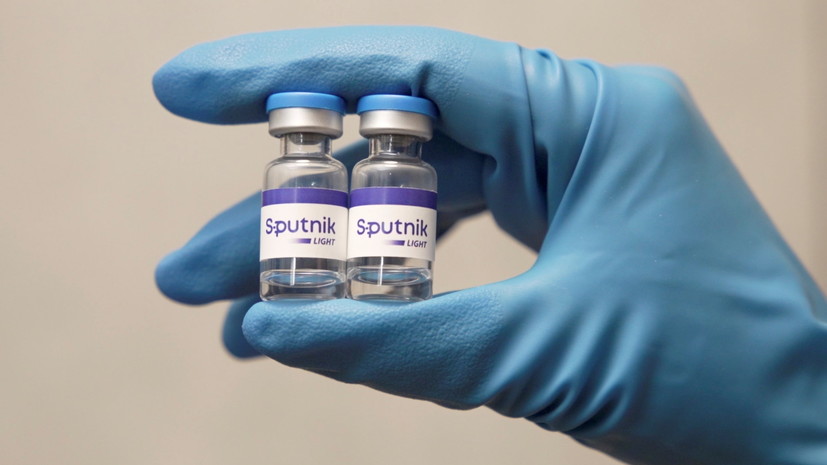 A single-component vaccine against coronavirus infection COVID-19 Sputnik Light has been registered in Russia.

This was announced in a joint press release by the Ministry of Health, the Gamaleya Research Institute and the Russian Direct Investment Fund (RDIF).

"The Sputnik Light drug is the first component of the Sputnik V coronavirus vaccine - a recombinant human adenoviral vector of the 26th serotype (rAd26)," the statement explains.

Studies have shown that the effectiveness of this drug is 79.4% from the 28th day after receiving the immunization.

It is emphasized that this figure exceeds the effectiveness of many vaccines that require two injections.

According to the RDIF, laboratory tests carried out by the Gamaleya Center have confirmed that Sputnik Light is effective against all new strains of coronavirus.

It is noted that the one-component version of the drug will be exported abroad and will help significantly accelerate vaccination in a number of countries in the context of the ongoing fight against coronavirus and its mutations.

"Sputnik Light" is a good tool for both initial vaccination and revaccination, and for increasing efficiency when combined with other vaccines, "added Alexander Gunzburg, head of the Gamaleya Center.

Vladimir Putin spoke about the current situation in the international coronavirus vaccine market.

During the conversation with Deputy Prime Minister Tatyana Golikova, the head of state appreciated the achievements of Russian specialists in this area and stated that the struggle between drug manufacturers is intensifying in the world.

“As far as I understand, the world markets decided to support the American vaccine Moderna, which the American-European other company, Pfizer, is fighting against, and it is fighting and behaving quite aggressively on the market.

But these are their questions, ”the president said.

He added that abroad this drug is called "completely innovative."

However, as the President noted, whether this is really so, it will be clear "only in ten years", after many years of application and analysis of the results.

Against this backdrop, Putin stressed that Russian drugs are based on well-known technologies and platforms.

“Our products are based on technologies and platforms that have been used for decades.

They are also very modern and today, without any doubt, are the most reliable and safest.

As one of the European experts said, they are reliable as a Kalashnikov assault rifle ... He is certainly right: simple and reliable, ”the President noted.

Commenting on the registration of the fourth Russian vaccine against COVID-19, the head of the Ministry of Health Mikhail Murashko noted that Sputnik Light has a favorable safety profile, and all volunteers have developed a cellular immune response to the pathogen SARS-CoV-2.

“Registration of the fourth Russian vaccine expands the available arsenal of drugs for the prevention of COVID-19 and will accelerate the formation of stable herd immunity,” the minister said.

At the same time, he stressed that the new vaccine is not an alternative to Sputnik V, since Sputnik Light was created for other tasks.

"Sputnik V" forms a more stable immunity and can be effectively used in people over 60 years of age.

"Sputnik Light" can be used for the rapid formation of population immunity in conditions of unfavorable development of the epidemiological process, "Murashko explained.

He added that the new single-component vaccine showed a pronounced increase in antibody titer in individuals with existing immunity to coronavirus.

According to the minister, this may indicate the possibility of using the drug in the future in those who had been ill with COVID-19 more than six months ago and now have a reduced antibody titer.

Also on russian.rt.com, the Ministry of Health announced the timing of the introduction of the Sputnik Light vaccine into civilian circulation

Over the past day, 7,639 new cases of coronavirus have been detected in Russia, 7,788 people have fully recovered, 351 patients have died from complications that developed against the background of COVID-19 and concomitant diseases.

Since the beginning of the pandemic, 4,855,128 cases of coronavirus have been recorded in the country.

During a meeting with Tatyana Golikova, the President also spoke about the current situation with coronavirus in Russia.

Speaking about the earlier decision to make days off between the May holidays, Putin noted the justification of this step.

“As far as I can see, including from your reports, the decision turned out to be justified, and we continue to reduce the incidence.

The number of cases is decreasing, and the number of those who have recovered is increasing.

At the same time, Putin asked to pay attention to the incoming information about the decrease in the volume of testing and the rate of vaccination in some regions.

The Deputy Prime Minister said that the situation with the spread of coronavirus in Russia is stable (the weekly incidence rate is 41.3 per 100 thousand inhabitants).

According to her, the largest increase in new cases occurs in Moscow and St. Petersburg, which was expected by specialists and is partly due to the large volume of testing in these cities.

She also said that to date, 13.4 million Russians have been vaccinated with the first component, 9.4 million are fully vaccinated against coronavirus.

The Deputy Prime Minister stressed that increasing the rate of vaccination remains a priority topic for stopping the incidence of COVID-19.