Guide: The power struggle and the scandals in the Handelsbanken sphere

The companies in Handelsbanksfären were estimated to be worth SEK 935 billion and the men in power sat on the keys to Swedish industry. But after scandalous revelations about hunting trips and exclusive benefits, the most powerful person in Swedish business was forced to leave all his assignments. Here is a guide to the power struggle that followed. 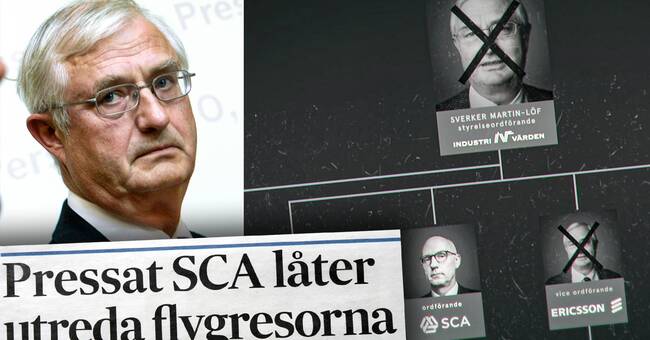 Sverker Martin-Löf was hailed as the emperor of Swedish industry.

Towards the end of his career, he was chairman of both SSAB and SCA, vice chairman of Ericsson and Handelsbanken and sat on the board of Skanska.

As chairman of Handelsbanken's power company Industrivärden, he was in the top position in the Swedish business community.

But just before retirement, everything changed:

In the autumn of 2014, Industrivärden's top tier travels with the forest company SCA's private jet to Spain to hunt and plan the future of the sphere.

Included in the trip are the CEOs of Handelsbanken, Industrivärden and SCA.

Sverker Martin-Löf has explicitly forbidden the financier and minority owner Fredrik Lundberg to accompany him on the journey where the change of throne in the sphere will be established.

At the top of the wish list to take over as Handelsbanken's Chairman of the Board is the bank's CEO Pär Boman.

He is singled out as the alpha male in a men's club and the Handelsbanken sphere is thrown into a crisis.

In the spring of 2015, Sverker Martin-Löf will leave all of his board assignments, as a result of media reporting.

Handelsbanken's then CEO Pär Boman will take over as chairman of both the bank and SCA - just as Sverker Martin-Löf wanted.

In April 2015, SCA's external investigators presented their review and directed harsh criticism at the company - but said at the same time that no formal errors had been committed.

All travel by air has been linked to work, even if it has sometimes included entertainment, according to the reviewers.

Pär Boman surprises many when he goes his own way and wants to do away with the old culture in the Handelsbanken sphere.

Several directors are fired, SCA's business flights are sold and auditors are replaced.

He launches the financier and minority owner Fredrik Lundberg as the new chairman of Industrivärden - the same man who was banned from traveling to Spain by Sverker Martin-Löf.

Assignment review can now reveal how Pär Boman and Fredrik Lundberg at a meeting in 2015 were monitored by a private security company, hired by SCA.

For a while, Pär Boman was forced to live with bodyguards due to the threat against him.

Sverker Martin-Löf states for Uppdrag review that his departure was already planned and that it was therefore not a degrading sort.

He was 71 years old and had already worked overtime for the benefit of the Handelsbanken sphere.

He also says that he used the business jet to handle all board assignments and have time to read papers.

See the full review in the series "The Bank and the Brotherhood" - the first two episodes are already available on SVT Play.