US researchers have developed an extremely reflective paint that can passively cool house walls. The cooling performance of the white color is comparable to that of air conditioning systems. This is made possible by special nanoparticles. 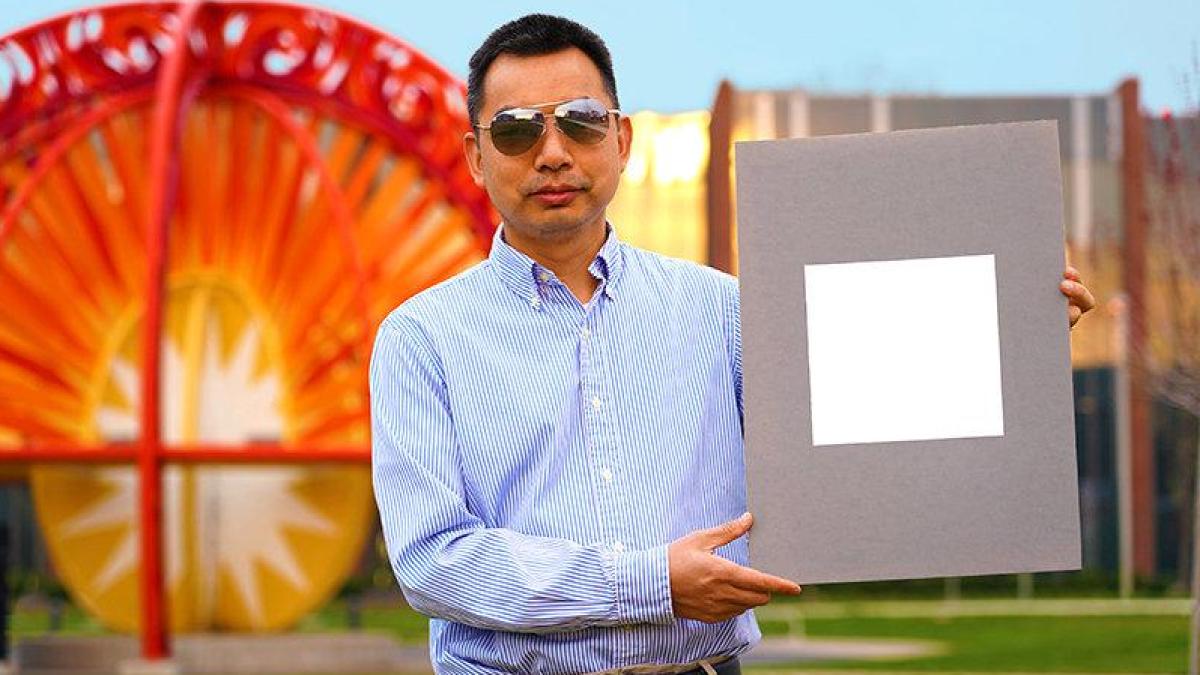 Air conditioning is expensive to buy and operate. The cooling performance of these devices is bought with electrical energy. Houses can basically also be passively cooled by painting the outer walls white. The white color reflects the light of the sun particularly well, so that the building in question does not heat up as much. The white of commercial paints can reflect 80 to 90 percent of sunlight. But that is not enough to achieve a cooling effect, i.e. to push the wall temperature below the ambient temperature.

Scientists from Purdue University in West Lafayette (US state Indiana) are now reporting in the journal “ACS Applied Materials & Interfaces” that they have succeeded in developing a color that increases the temperature of a facade by 4.5 degrees in the blazing midday sun Reduce Celsius, i.e. let it cool passively.

The research team led by Xiulin Ruan determined the effective cooling capacity of the new paint in a field test of up to 117 watts per square meter - a world record.

So if you paint a flat roof of 90 square meters with the Purdue researchers' white paint, you could get a cooling capacity of ten kilowatts in this way.

"That is more than conventional air conditioning systems in houses can do," says Xiulin Ruan.

And the wall surfaces are not even taken into account.

You could also paint it with the white paint.

The researchers are convinced that their high-tech paint can in many cases be a real alternative to air conditioning.

The high cooling capacity of the paint is explained by its extremely high reflectivity.

It reflects 98.1 percent of the sunlight.

That is also a world record.

This research success did not fall from the sky.

The whitest white in the world is the result of six years of hard work.

Ruan's researchers have dealt with pretty much all substances that are white and can be used as an ingredient in a color.

From more than 100 materials, the researchers shortlisted ten and produced around 50 different white colors from them.

They achieved an interim success in October 2020 with a paint based on calcium carbonate.

This white could at least reflect 95.5 percent of the sunlight.

That was also the valid world record at the time.

However, the achievable cooling capacity was only 37 watts.

That was only enough to lower the temperature by 1.7 degrees Celsius.

The main change towards the current wonder white was the change from calcium carbonate to barium sulfate.

Both whiteners are present in the paint as tiny nanoparticles that can scatter light well.

In order for this to work for as many wavelengths of sunlight as possible, the particles must have a whole spectrum of different sizes.

In the case of barium sulfate, the size of the nanoparticles is between 270 and 530 nanometers.

A nanometer is a millionth of a millimeter.

The wide range of particle sizes is a crucial prerequisite for the very high reflectivity of the color, explains Purdue researcher Joseph Peoples, who was involved in the development.

The second important factor is simply the highest possible concentration of the nanoparticles.

It may be possible to create an even whiter white by further increasing the concentration of the nanoparticles.

But such an improvement to the record mark does not necessarily have to make sense for the practical applicability of the color.

Because if you increase the concentration of the white pigments too much, according to the researchers, you also increase the likelihood that the paint will crack or peel off over time.

The researchers admit that even with the current formulation of the whitest white, the abrasion is a little higher than with commercially available colors.

Otherwise, the color is comparable to commercial products, especially with regard to its viscosity and processability.

It is "user-friendly" say the Purdue researchers.

For the most efficient use of the white color as passive cooling, it should also be noted that the reflectivity and thus the cooling performance depends on the thickness of the applied paint layer.

The researchers achieved the record value of 98.1 percent with a layer thickness of 400 micrometers, i.e. 0.4 millimeters.

The color has another advantage. Most of the thermal radiation emitted by the white nanoparticle paint has wavelengths between eight and 14 micrometers. This wavelength range is known as the “atmospheric window” because this thermal radiation is hardly absorbed by the atmosphere, but can escape almost unhindered into space. That could be described as an active contribution to climate protection.