The Sea Watch with 455 migrants is in Trapani. Swabs on board

Men, women and children rescued in six separate sea operations operated by the German NGO off the Libyan coast 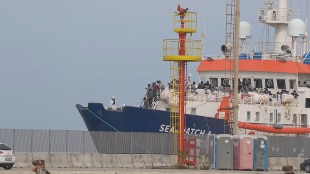 04 May 2021 The Sea Watch 4 ship, carrying 455 migrants rescued in six different rescue operations in the Mediterranean, arrived this morning in the port of Trapani. Control operations and swabs for Covid are already underway on board the ship of the German NGO.

Once the checks have been completed, the 194 unaccompanied minors will be distributed in the centers of the province of Trapani and the island. Among them 6 children.

All the others, in a second phase, will be taken aboard the Splendid and Azzurra quarantine ships at anchor, one facing the southern coast, the other on the northern coast. The mayor of Trapani, Giacomo Tranchida, also arrived at the Ronciglio pier

"The people they have rescued are very tried but happy to know that they will soon be able to disembark," the Sea Watch tweeted yesterday.

🔴 We are heading to Trapani, the safe harbor assigned by the Italian authorities to # SeaWatch4.

The people they have rescued are very tried but happy to know that they will soon be able to disembark.

The conditions on # SeaWatch4 are difficult, it is cold, windy and high waves wash the castaways.

But there is solidarity on board and we help each other.

Escaping death at sea and the capture of Libyans gives strength and hope.

We hope to be able to land soon.