May Fourth Youth Day, "I" feel "speed and passion" in the Greater Bay Area

Reporter: Yang Chengchen and Zhu Zuying   In 1900, after the Reform Movement of 1898, Mr. Liang Qichao wrote "Youth China", screaming "Youth will make the country strong" and "You will make the country progress if young people progress." Over a century of time, his birthplace, Jiangmen, Guangdong, is already an important node city in the Guangdong-Hong Kong-Macao Greater Bay Area. In the Greate 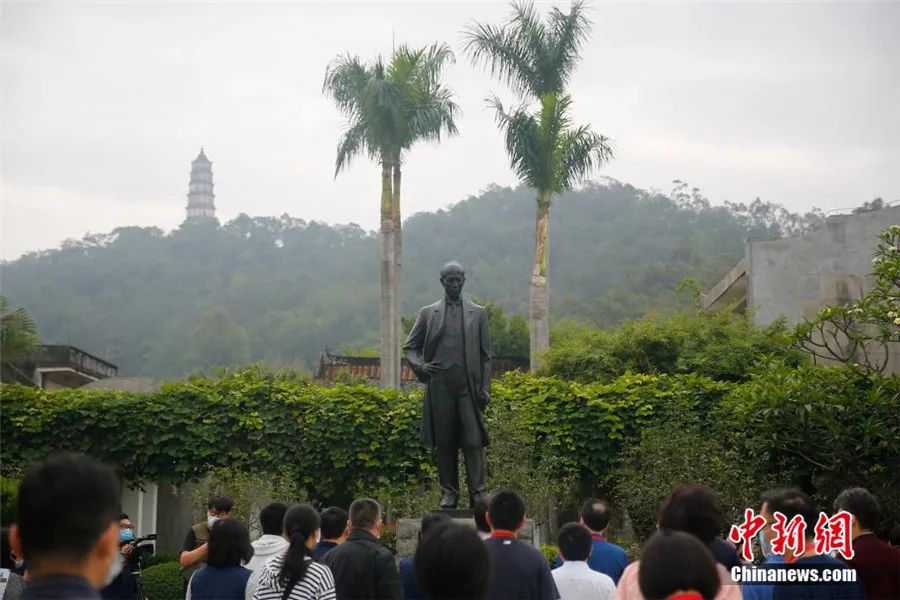 Over a century of time, his birthplace, Jiangmen, Guangdong, is already an important node city in the Guangdong-Hong Kong-Macao Greater Bay Area.

In the Greater Bay Area, which gathers 11 cities, countless struggling young figures are spreading their blood and youth here.

On the May Fourth Youth Day in 2021, what are the young people in the Greater Bay Area doing?

What do you want to say?

The picture shows the former residence of Liang Qichao in Jiangmen, Guangdong.

"I" engages in science and technology innovation in Shenzhen, with many talents and strong atmosphere

He Yaowei from Hong Kong is the founder of Shutang Information Technology (Shenzhen) Co., Ltd. The company relies on high technology to develop and produce intelligent daily necessities.

Shenzhen is connected to Hong Kong and backed by the Pearl River Delta. A complete industrial chain is his most important point. "Shenzhen has accumulated a lot of scientific and technological talents for so many years and has a strong entrepreneurial atmosphere. The supply chain, industrial chain and technical resources here are very rich. Quickly change the research from experiment to commercialized product."

The picture shows YMCA He Yaowei, who is engaged in science and technology entrepreneurship in Shenzhen.

Yu Guangtao, the founder of Cuji Technology and a young entrepreneur in Hong Kong, deeply agrees with this. He said that the Greater Bay Area city cluster has a very good industrial foundation, and scientific research results are also very fruitful, including the intelligentization of manufacturing, the systematization of industry, and the biological system. Technology etc.

"I" is in Guangzhou, it's time to realize my dream

Ye Weilun came to Guangzhou with his father in 2002, and 10 years later, he served as the company's managing director and was in charge of overall company management.

In 20 years of operation, he has promoted the brand created by his family business to the world, and has successively obtained product authorizations from international brands.

He told reporters that the next step is to fight for the company's listing and let the company's employees become partners in the business; while participating in the construction of the Greater Bay Area, he can also realize his dream and contribute to the development of the country. He is very proud.

"Hello everyone, we are'Hong Kong husband and wife', and we're talking about things with you." In an office in Guangzhou, Li Jianxi from Hong Kong and Sun Jiaxi from Guangzhou set up live broadcast equipment.

In February last year, Li Jianxi came to "depart for" Sun Jiaxi and started his own business.

"You have to go to a city in the Greater Bay Area to start your own business in person to know how good this place is and how strong the motherland's support for young people from Hong Kong and Macao is." Li Jianxi said.

"My" "two cities" life, out of the comfort zone for development

Zhang Siyuan lives in Macau and works in Hengqin, Zhuhai. He commutes to two places every day, and the journey takes only one hour.

After graduating from university and passing the mainland judicial examination, he came to Hengqin for an internship. He said that it provides young people with very good conditions and policies for entrepreneurship.

"The West has been the place that everyone yearned for over the past 100 years; but now the Greater Bay Area is booming and has huge potential. Young people are more suitable to come here."

The picture shows Zhang Siyuan, a young Macau lawyer who is working as a trainee lawyer in Zhuhai.

Also working in Hengqin are Macau designers such as Li Junhong and Gong Haoci.

Li Junhong said frankly that Macau is small and there are relatively few opportunities for large-scale projects to start, while the mainland is completely different.

Hengqin is still in the development stage, "there are many things young people can do here".

Gong Haoci said, "I am very lucky to come to Hengqin. For myself, the skills and experience I need to learn have allowed me to have higher goals in career planning."

"I" feel the "Bay Area Speed" in Zhongshan

"In the four years since we started our business, our team has grown from 12 people to 120 people now. Our income has almost doubled by 10 times, and the scale of development has increased by at least 2 to 3 times every year. A Korean customer said,'You are the speed of the Bay Area.'" by Hong Kong Zhongshan Kangsheng Biotechnology, founded by young scientist Dr. Pan Honghui and his team in 2018, is already a star enterprise in the biomedical field in the Guangdong-Hong Kong-Macao Greater Bay Area.

Pan Honghui said that Zhongshan is close to the core cities of the Greater Bay Area such as Guangzhou, Shenzhen, Hong Kong and Macau, and has advantages in helping international companies to open up markets and absorb international capital and talents.

In addition, biomedical technology is one of the three pillars of Zhongshan, and the industrial agglomeration effect is also very obvious.

"Our company can provide this key raw material in Asia, not only for China, but for the integrity of the global supply chain is very important."

"I" "grow vegetables" and "fish" in the Greater Bay Area

After returning to China in 2014, the dark-skinned "post-80s" Hong Kong youth Huang Huiming began to understand the market space of agricultural products in the mainland, and joined a few overseas returnees in the "My Farm" project in Dongguan.

The land he chose turned out to be barren.

"Cultivated land needs more feelings. With feelings, if you stick to it, you will definitely be able to make achievements." Nowadays, modern water-saving irrigation equipment, homemade biological fertilizers, and good biological management techniques are used here.

"New agriculture can attract more young people in Hong Kong to learn about our national conditions and development, and they can also have a different experience."

The picture on the left shows Huang Huiming and his entrepreneurial partners in the orchard "My Farm".

"We have witnessed many miracles in the Greater Bay Area for five years since we started our business, and we have witnessed that many seemingly impossible things become possible." The fish and vegetable symbiosis entrepreneurial team of the Jiangmen Agricultural Science and Technology Innovation Center is formed by the "post-90s" Hong Kong youth Formed by Liang Lifeng, Luo Weite, and Tan Huimin.

This Bay Area city has a lot of support policies for agricultural entrepreneurship projects, and it pays particular attention to the entrepreneurship of young people from Hong Kong and Macau.

After graduating from postgraduates in 2019, the two decided to start a consulting service company in Zhaoqing, where Liang Jiankun’s ancestral home is located.

The industry level is relatively backward and the clustering effect is not yet obvious. It also means that the market development potential has yet to be fully tapped by entrepreneurs.

The picture shows the Hong Kong Youth Group Tang Zhenyu who started his business in Zhaoqing.

He said that competition between differences is the advantage of cities in the Greater Bay Area, and he is not afraid to become "the first person to eat crabs."

"When I first came to Zhaoqing New District, there were still ponds here, and now there are more and more urban constructions." Tang Zhenyu said, especially after several years of construction, Zhaoqing's traffic convenience has been greatly improved. Zhaoqing's high-speed rail opened in 2019. It only takes 80 minutes to Hong Kong Kowloon.

"When you come to a city like Zhaoqing to start a business, the cost of starting a business and cost of living will be lower than those in Guangzhou, Shenzhen, Hong Kong and Macau. The consulting service industry is still in its infancy in Zhaoqing. We chose this industry to start a business because we want to be the first "crab-eater". People'."

After 5 years of operation, the restaurant has now become a well-known Internet celebrity store in Guangdong, with 11 branches in Guangzhou, Shenzhen, Dongguan, Zhuhai and other cities in the Greater Bay Area.

"It is necessary to grasp the characteristics of different cities in order to provide more precise services in the'picky' catering industry." Li Guoming said, the entrepreneurial process is not all smooth sailing, and today's development is not "success", but it can be seen in the Greater Bay Area. "There is a better chance."

Yao Zhijia, a 34-year-old Hong Kong youth, has frequently travelled to and from Hong Kong and Huizhou since 2013 because of his family business.

Last year, the new crown epidemic caused poor customs clearance, and he had more than a year to observe this changing city in depth.

"At present, foreign countries still have some misunderstandings about China’s development. I hope that through our efforts, more people can see China’s development and eliminate their misunderstandings. The development opportunities in the Greater Bay Area are also very good, and I also hope that through our The spread of this has attracted more young people from Hong Kong and Macau to start their own businesses.” Xu Baihong said.

In the development blueprint of the Greater Bay Area, 11 cities have their own advantages and positioning.

At the same time, they also merge with each other and complement each other.

In the former residence of Liang Qichao in Jiangmen, juvenile volunteers from Liang Qichao Memorial Middle School introduced the 100-year history and family tradition to the tourists who visited Ruzhi during the May 1st holiday.

They are as described in "The Young China Talk": "The future is like the sea, and the future is long in Japan."