Karlskogaföretag wrote out a spare part in plastic for JAS

The company Amexci in Karlskoga has passed a milestone. On behalf of one of its owners, the defense group SAAB, they have developed a spare part for JAS. The unique thing is that in the future it is intended to be able to be printed on site in the field. 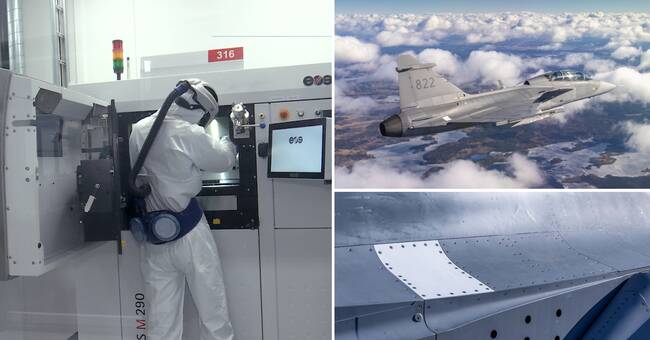 It may sound simple - to print spare parts from a drawing to a jet plane.

At least not yet, but you are well on your way with the sharp test that was carried out in March during a flight in Linköping.

The company behind the detail printed in a plastic material is Amexci in Karlskoga, which deals with additive manufacturing, or 3D printing.

The project has been going on for three years and has been surrounded by a series of tests before the actual flight.

The purpose of the project is to eventually make it possible to obtain spare parts in the field.

- It was in the prospectus to develop a plastic product that can replace aluminum.

It is not a sustainable solution over time, but can solve a problem in the short term, says Joel Andersson, head of operations.

The company, which has existed since the end of 2017, is jointly owned by several Swedish and Finnish large companies.

Among others SKF, Stora Enso and Husqvarna.

Their task is to design and develop products using the relatively new technology.

Where today it is also possible to create products by melting together thin layers of metal powder.

On its way into a new phase

Advantages include limited energy and material consumption and being able to design special products with unique properties in small series.

The disadvantages, so far, include expensive manufacturing costs and long production times, but the technology is constantly being refined.

- It has gone from the very first hype phase to entering an industrialization phase.

We see so many good industrial examples on the market that we feel confident that this technology has a role to play in the future, says Edvin Resebo.

Hear more about the technology in the video.