"Choice 2" ... accusations of falsifying a recent date and setting the stage for executions in Egypt

“Choice 2” renewed the controversy over recent facts that the Egyptians lived through and split about, in what was called the bias of the series’s makers to the power narrative. On the other hand, others asserted that it was a "doomed" attempt to falsify history and the present. 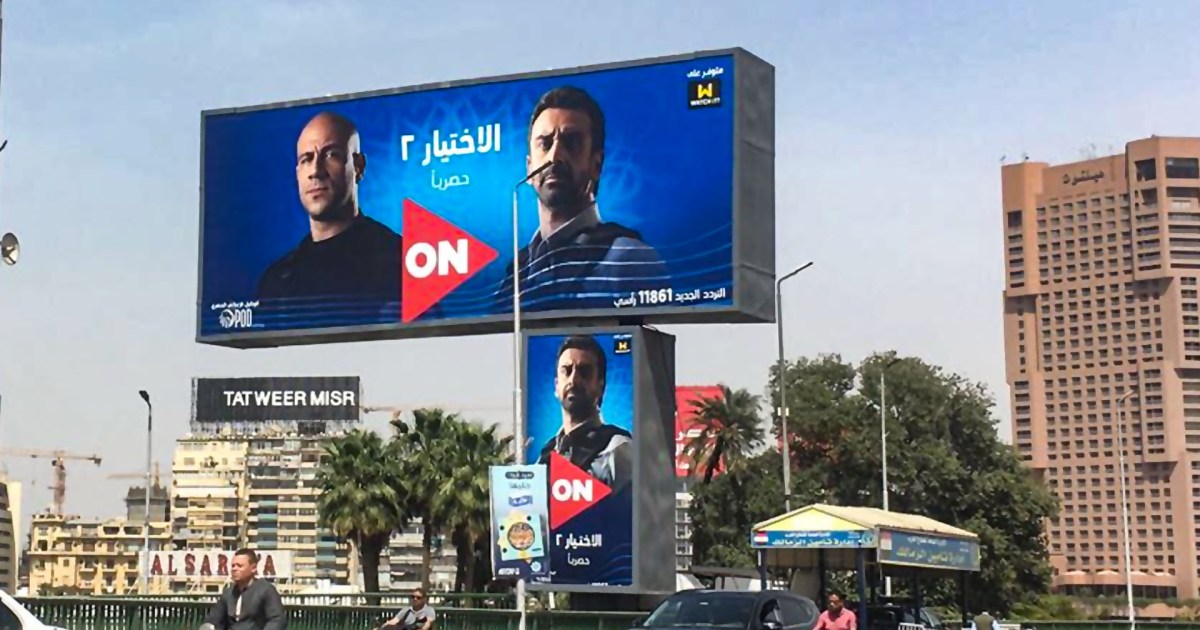 Controversy continues in Egypt regarding the series "Choice 2", especially with regard to its handling of recent facts that the Egyptians lived through and divided about, as the so-called "bias" of the series makers to the official narrative and presented it as the only approved novel, while followers confirmed that the series is a "doomed attempt." "To falsify history and change the present.

After a fading out for several days, the controversy of this television act escalated again after observers linked the authority’s recent execution of wholesale death sentences, and the psychological charge that the events of the series inflated in the hearts of the supporters of the authority, to break the custom followed not to carry out the execution in the blessed month of Ramadan and other occasions Religious "as if in response to the demand of the masses."

This work deals with the events of the period that followed the military coup in July 2013, to present the new authority's viewpoint on the most prominent events, including facts whose effects are still present in the hearts of entire families, such as the massacres of Rabaa al-Adawiya and al-Nahda, whose victims were thousands of dead and wounded Egyptians.

It was also noticeable that the series issued final and final judgments on people whose cases are still in circulation in the courts.

By monitoring the episodes that have been broadcast until today, it seems clear that the series is keen to present the image of opponents of the regime, either terrorists, saboteurs, or foreign agents, and at best they are absent and driven by illusions.

On the other hand, the series highlights an angelic image of members of the security services, as they care for the life of the opponents of the coup, and treat them according to the law, as well as highlighting the supporters of the new authority in the form of good people who are keen on the stability of the country.

This ideal image of security personnel sparked widespread ridicule on the communication sites, and opponents were keen to push the image that the series tried to present about them by presenting documented facts and videos recorded on YouTube that refute this story, especially with regard to the massacres of Rab'a and al-Nahda.

The selection series will go to the dustbin of history and will be taught as a model for falsifying the facts, and its fourth massacre

will remain a model as the largest level of violence practiced by an armed authority against a group of people.

An image from reality and not fiction from filming the series The Choice:

Asmaa Saqr, one of the martyrs of the Fourth Massacre, her husband is a journalist who was shot in the foot, so she tried to help him reach the field hospital, so a large bullet came to her and killed her immediately.

from the series The Choice on the dispersal of the Rab'a sit-in pic.twitter.com/uZR9nioLmu

I am watching excerpts from the series, The Choice pic.twitter.com/eaqvKfWzUS

Leaked photo of an officer from the series "Choice 3" pic.twitter.com/IOirJlto5A

In turn, supporters of the authority expressed their admiration for the series, asserting that it demolished what remained of the public sympathy for the Muslim Brotherhood and their supporters.

Commentators described the events of the series as heroic, as stated in a tweet by former businessman Ashraf Al-Saad, who left Egypt many years ago to escape prosecution after his involvement in seizing the money of hundreds of Egyptians in what was known as the issue of investing money, while parliamentarian and journalist Mustafa Bakri went so far as to say that an accident The Benha train overturn, north of Cairo, is in fact "a plot to cover up the success of the episode dealing with the dispersal of the Rab'a sit-in."

Toukh train accident, not a coincidence

hours ago, a major transformation occurred for many, after the success of the Al-Ikhtiar series in exposing a fourth grievance with real facts and evidence

- after which a video was published to hang the martyr Nabil Habashi, pastor of Bir al-Abed Church in Sinai

# Choice_2 If it is preferred to complement this ... it will remain the best series in the history of Egyptian drama.

The series "Choice is the best possible series that anyone can see in his life."

The creator in the series “The Choice” is

that the real Rabaa

dispersal is due to the Missorosh brothers, the history of the coming generations. As usual,

you see a real series, real

filming them and their channels,

but we collected part of their terror in the

Their terror exceeded the

representation. This is a

enough to see themselves and their terror with

The writer and art critic Hussam Al-Ghamri says that he expected that the second part of the series "The Choice" would not achieve a popular momentum like the one achieved by the first part, which has actually happened, according to what he told Al-Jazeera Net, because trying to channel people's sympathy towards the police is very difficult because the police and their apparatus with daily contact With the fans on the street, and anyone who has experience with them knows that reality is different from the series.

Al-Ghamri considered that showing the police officers in this angelic image was "extreme naivety" by the drama writer, as exaggeration often had an adverse effect, and that was also adopted by the series of repeating a negative stereotype of the "Islamic" character by showing a malevolent sinister versus an angelic image of police officers. .

And the art critic expressed his belief that "the impact of the series will not be great, because the Egyptians are preoccupied with the file of the Renaissance Dam and its existential danger to Egypt, in light of a lackluster official performance in the face of Ethiopia's provocations, which makes it difficult to sympathize and deal with any official narrative that glorifies organs and institutions, while This story belies the present reality. "

Al-Ghamry concluded that there are facts still fresh in the minds of Egyptians that would destroy the narrative that the series and behind it the authority tried to present about the fourth massacre specifically, including the resignation of Mohamed El-Baradei, Vice President of the Republic in the post-coup regime of July 3, 2013, in protest of the massacre. And also the statement of the Sheikh of Al-Azhar, Ahmed Al-Tayeb, commenting on the massacre and announcing that he was hiding in his home in protest and dismay at all this blood that was shed.

Reality is stronger than drama

For his part, researcher and expert in security affairs Ahmed Maulana says - in an interview with Al Jazeera Net - that the series will not change the reality of the facts of pre-biased segments, whether from the point of view of the authority or the opposition.

As for the general public - Mawlana adds - there may be some influence that he thinks will dissipate with the passage of time, citing the example with films such as the terrorist, whose public success did not prevent Egyptians from electing Islamists in parliament during the rule of the late President Hosni Mubarak, or in Parliament and the presidency after a revolution. January 2011.

Mawlana stressed that the daily lived reality, and direct contact with the security services, has a continuous and renewed impact, greater than the impact of any movie or series that quickly falls into oblivion.

As for the former Secretary General of the Supreme Council of Press, Qutb Al-Arabi, he considers - in statements to Al-Jazeera Net - that the whole series is an attempt to falsify events, according to the official version, as is the case in many series produced by an intelligence company.

Al-Arabi, who belongs to the Muslim Brotherhood, said, "The series rages lies that were told by the regime’s media at the time, which were quickly dispelled because it did not stand up to the facts," noting that the Rabaa sit-in had invited journalists to enter the sit-in, walk around and write the truth, and most of them were unable to write about what they saw with their own eyes. (From the peaceful sit-in) due to the security grip imposed by the coup authority on the media at the time.

He stressed that the safe passages for the exit of the protesters, which the series showed, were not safe at all, as they were a trap to kill and arrest the protesters while they were leaving. He also accused the series makers of deliberately mixing the Muslim Brotherhood with other groups, as it portrayed them as if they were working under a unified leadership.

Although the "Ansar Beit Al-Maqdis" group claimed responsibility for the assassination of National Security presenter Muhammad Mabrouk - Al-Arabi says - the series insists on accusing the Brotherhood, and while the defendants are still before the courts, the makers of the series issued verdicts against them and condemned them as "confirmed perpetrators."

Al-Arabi considered that the aim of the series is to "brainwash" the new generations who were young and unaware of the reality of what is happening around them at that time, calling for the "neglect" of the series 'narration of events because it is "fallen today and tomorrow with the departure of this system, as all previous regimes' narratives have fallen." By its fall. "