The largest mosaic of the UAE flag enters "Guinness"

A mosaic of the Emirati flag entered the Guinness Book of Records as part of the initiative launched by the "Nefsy" application as part of the 49th National Day campaign for the United Arab Emirates. 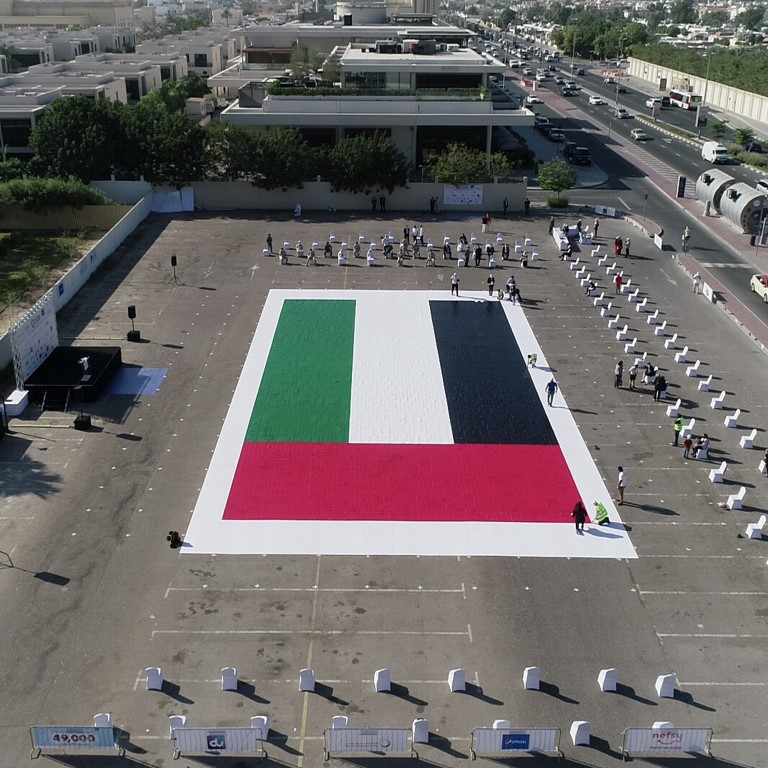 The largest mosaic of the UAE flag enters "Guinness"

A mosaic of the UAE flag has entered the Guinness Book of Records as part of the initiative launched by the "Nefsy" application as part of the 49th National Day campaign for the UAE.

This initiative, which was sponsored by the National Food Company "NFPC" as a silver sponsor, in cooperation with the Emirates Red Crescent Authority, the Government of Dubai and the Department of Islamic Affairs and Charitable Activities aimed at providing assistance in facing the spread of the Covid-19 pandemic and reducing its social and economic impacts by collecting in-kind donations and distributing them to families. The needy, as this initiative is in harmony with the strategy and efforts of the National Foodstuff Company, which is keen to provide support to the local community based on its absolute belief in its role and its social responsibility in giving and giving back to members of society.

The Department of Islamic Affairs and Charitable Activities in Dubai, with the support of the sponsors of this event, led by the National Food Company, collected donations to secure 49,000 food packages that contained basic commodities such as rice, flour, edible oil, sugar, salt, hand sanitizer, in addition to water bottles provided by Oasis. Families in need by the Emirates Red Crescent, where each food box was accompanied by a card as a greeting to needy families that included the phrase "Do not worry" in a message of support and love to needy families that they are not alone and all members of the community are by their side.

These cards were used to create the largest mosaic panel in the world embodying the Emirati flag and the size of the mosaic of the flag of the United Arab Emirates reached 498.33 square meters. It was worked on and displayed in the courtyard of the Police College in Al Wasl area, where the public had the opportunity for two weeks to see this masterpiece that entered the Guinness Book of Records. .

All proceeds from this initiative - which is sponsored by the National Food Company in its capacity as the silver sponsor, in addition to drinking water "Oasis", which also had a contribution as a silver sponsor - went to the benefit of the Emirates Red Crescent, which in turn distributed meals to more than 250 thousand people over a period of ten days. In addition to the main sponsor, PepsiCo, which worked to provide support to secure 5,000 food boxes in addition to securing about one million meals that were distributed to the needy, while the Emirates Integrated Telecommunications Company, as the diamond sponsor of this event, sent about 7 million SMS messages in All over the Emirates to urge its customers and the work team to donate to this initiative.

As the Platinum Sponsor, Dubai Electricity and Water Authority "Dewa" and "Tabreed" provided direct support to secure 4,900 boxes and 4,000 food boxes, while GulfCo and Dubai Rotary Club provided 50,000 sterilization packages for the volunteers in the event and campaign.

As for the golden sponsor, Aparel and Patchi Group provided 13,000 tons of nutritional foods for food boxes, while Patchi provided chocolates to needy families, as well as a large number of companies and brands that provided logistical and voluntary support for this event as the Bronze Sponsor.