The death toll from Coronavirus infections in India exceeds 17 million

Yesterday, the Indian Ministry of Health announced the registration of 352,991 new cases of the emerging corona virus (Covid-19) within 24 hours, and thus the death toll from the virus reached 17 million and 313 thousand and 163 cases, while the crisis ravaged India's hospitals. cases 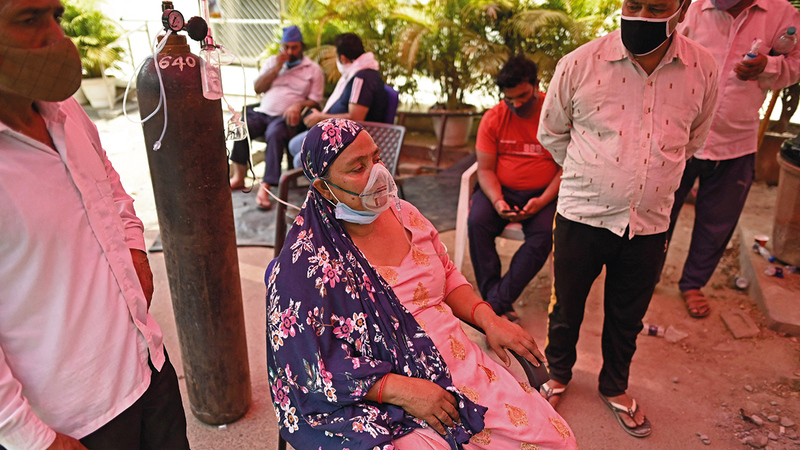 The death toll from Coronavirus infections in India exceeds 17 million

A patient gets oxygen by the side of the road in India.

Yesterday, the Indian Ministry of Health announced the registration of 352,991 new cases of the emerging corona virus (Covid-19) within 24 hours, and thus the death toll from the virus reached 17 million and 313 thousand and 163 cases, while the crisis ravaged India's hospitals.

Since April 22, India has recorded more than 300,000 daily cases of the virus, and the Hindustan Times quoted the ministry as saying that 2,812 new deaths have been recorded with the virus, bringing the total number of deaths to 195,123.

The United States and Britain rushed to provide India with respirators and vaccination equipment, yesterday, at a time when the Asian country is facing an unprecedented catastrophic wave of "Covid-19" that flooded hospitals and crematoriums, which have subsequently become fully functional.

The recent surge in the number of injuries prompted patients' families to resort to social media to broadcast appeals for oxygen supplies and to know which hospitals have beds, while the authorities of the capital, New Delhi, extended a one-week lockdown.

France, Germany and Canada pledged support to India, which has been attributed to the rise in the number of infections worldwide in recent days.

The first shipment of air supplies from the United Kingdom, including respirators and oxygen equipment, is scheduled to arrive in India this morning, according to British Prime Minister Boris Johnson, pledging that his country will do everything in its power to help.

In turn, the White House has confirmed that it will immediately provide equipment for the production of vaccines, treatments, tests, respirators and prevention to India.

A local health official told Reuters, a partner agency of international news agency Asia, that a fire broke out in a hospital in the western city of Surat, killing four patients with the Coronavirus the day before yesterday, in the latest series of similar calamities that occurred recently.

Indian Prime Minister Narendra Modi urged all citizens to vaccinate and take reasons of caution, at a time when hospitals and doctors declared that they were unable to keep pace with the flood of patients.

In some of the worst-affected cities, including New Delhi, people have resorted to cremation in makeshift facilities that provide funeral services.

The Corona virus has caused the death of 3,109,991 million people in the world since the outbreak of the epidemic in China in December 2019, until yesterday, according to a census conducted by Agence France-Presse based on official sources, and it has been confirmed that more than 147,040.880 million people have been infected with the virus since its emergence.

The vast majority of those infected have recovered.

And the United States is the country most affected in terms of 572,200 deaths and 32,077,305 injuries, according to Johns Hopkins University figures.

• The United States and Britain provide India with respirators and vaccination equipment ... and Modi calls on everyone to get vaccinated.