Melania Trump is celebrating her 51st birthday on Monday. Just no one has seen him outside the gates of Mar-a-Lago for months. 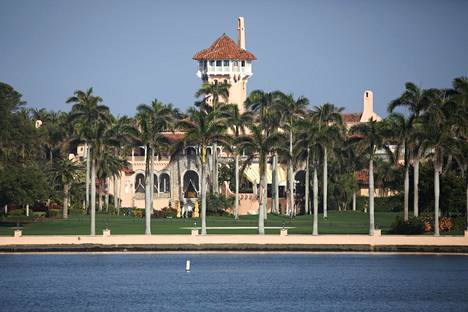 On a Saturday in April, a rare sight was recorded on the camera of a dinner guest.

Dressed in a long white Giambatt Valli evening gown, Melania Trump stepped her hair fluttering and smiling with a smile on her husband's hand in the ballroom of Mar-a-Lago, where the couple were enduring Republican donors.

Ms. Trump has recorded the amount counted on the fingers of one hand since January.

Even on those occasions, she has been firmly inside the Mar-a-Lago fences, usually accompanied by her husband and son.

No pictures of him have officially ended up in public since he landed on a plane from Washington DC to the Florida sun.

After leaving the White House, the trumps have fortified their Mar-a-Lago mansion in Palm Beach, Florida. Photo: Marco Bello

Melania Trump is celebrating her birthday on April 26 - presumably within the same fences.

But what has the first retired U.S. woman actually been busy with for the past three months?

Palm Beach insiders, who spoke to People magazine, said Melania has simply focused on her son Barron, enjoying spa treatments and spending time with her parents.

- I can honestly say that he is playing the game to his advantage.

Here it is not a bad thing at all, one formulated it.

Barron Trump, who has just turned 15, now lives with his parents in Florida.

The boy has been seen on the golf course together with his father, but otherwise he too has remained quite hidden.Photo: ERIN SCOTT

The first sign of life after leaving the White House was seen on Valentine’s Day, when the Trumps posed for their fans ’selfie photos in the Mar-a-Lago dining room.

On the same day, attention was drawn to the lady's Valentine's Day greetings, in which she did not mention her husband a word.

At the same time, CNN reported that Melania would even spend all her time lazing around the spa.

Trump's representatives acknowledged the speeches as malicious gossip, but did not tell what the truth was over the days.

Since then, Melania has sent only occasional greetings to the public.

In March, he congratulated the Barron boy on his 15th birthday, in early April he remembered the children of the army families and sent a message of congratulations on the death of Prince Philip.

Back in January, Melania Trump impressively announced that she had set up her own office to continue the Be Best campaign, which was launched in the White House, albeit with a bad reputation, to combat bullying and promote the well-being of children.

Stephanie Winston Wolkoff, a former assistant and friend who quarreled with Melania, said the preparations for the campaign were initially very competent and involved a wide range of experts, but the end result was strange and poorly managed.

The already mentioned Mar-a-Lago dining room seems to be the center of Trumpie’s life at the moment, where they keep some sort of their own court.

The pictures and videos that have come to the public show how night after night the Trumps are stepping into their restaurant nicely dressed while other diners give them standing applause.

At Easter, they went to enjoy the applause at the local church.

It seems that Melania Trump is quite happy with her isolation.

Local sources point out that the Trumps spend virtually all of their time only with like-minded people who like them.

She focuses on motherhood and prioritizes her family while working on several long-term projects, Melania Trump’s spokeswoman told People in April.

However, many wonder what Mrs. Trump has in mind.

Back in the winter, Melania Trump was bet that she was planning an early divorce from her husband right after the end of the presidency, but at least there are no signs of that yet.

Melania Trump is known to spend a lot of time with her parents Viktor and Amalija Knavs.

They gained U.S. citizenship a couple of years ago. Photo: Chris Kleponis

Melania Trump was filmed with her sister Ines (left) in Mar-a-Lago in 2005.Picture: CAPEHART

Like her husband, she values ​​image and loyalty to the close circle above all else.

Donald Trump is 24 years older than him.

She still has a long life ahead, Mary Jordan reminds People magazine.

According to biographers, the role models of young Melania were enchanting-eyed Actors like Sophia Loren and she too dreamed of one day becoming similar until she ended up in a modeling career.

- If I weren't beautiful, do you think she would be with me?

In 2005, Melania responded to a student who asked if she would be with Donald Trump if this one was not rich.

However, the money was not what Melania alone has been after.

- Many thought he just wanted to get rich.

But he also wanted to be known, says Mary Jordan, a writer and journalist who studied the stages of Melania.

Now a more relaxed woman has been seen in Florida.Photo: SMG

The biographers all paint a picture of a woman whose every movement has been considered - even the much-analyzed secrecy is designed, according to Wolkoff.

- He's not enigmatic or mystical.

That’s why people’s perception of him is so important.

The wall of protection around her, slapping her husband’s hand, it’s all part of a game designed to reinforce that mystery, Wolkoff says.

- When I was in Slovenia (Melania's birthplace), the same thing came up again and again.

He is there, is quiet first and then makes his game moves, Jordan describes.

For trumps, quality has been a popular target for speculation for years.

- He is the strongest ally you can get if you want to influence Donald Trump.

I've known him for a long time and no one can influence him as much as Melania, a former New Jersey Governor Chris Christie said the ABC channel in 2018.

Melania Trump downplayed her power later that year in a rare interview.

I tell her my honest opinion and she then does what she wants, Melania stated.

When Melania Trump was caught in the middle of Donald Trump’s harassment scandal during the first presidential campaign, she never considered a resignation, according to biographers.

- People in the close circle told me over and over again: he benefits more from staying than leaving, Jordan recalls.