The Indonesian Navy announced on Sunday April 25 that it had found the submarine KRI Nanggala 402 which had sunk off the island of Bali and confirmed that the 53 members of its crew were all ... 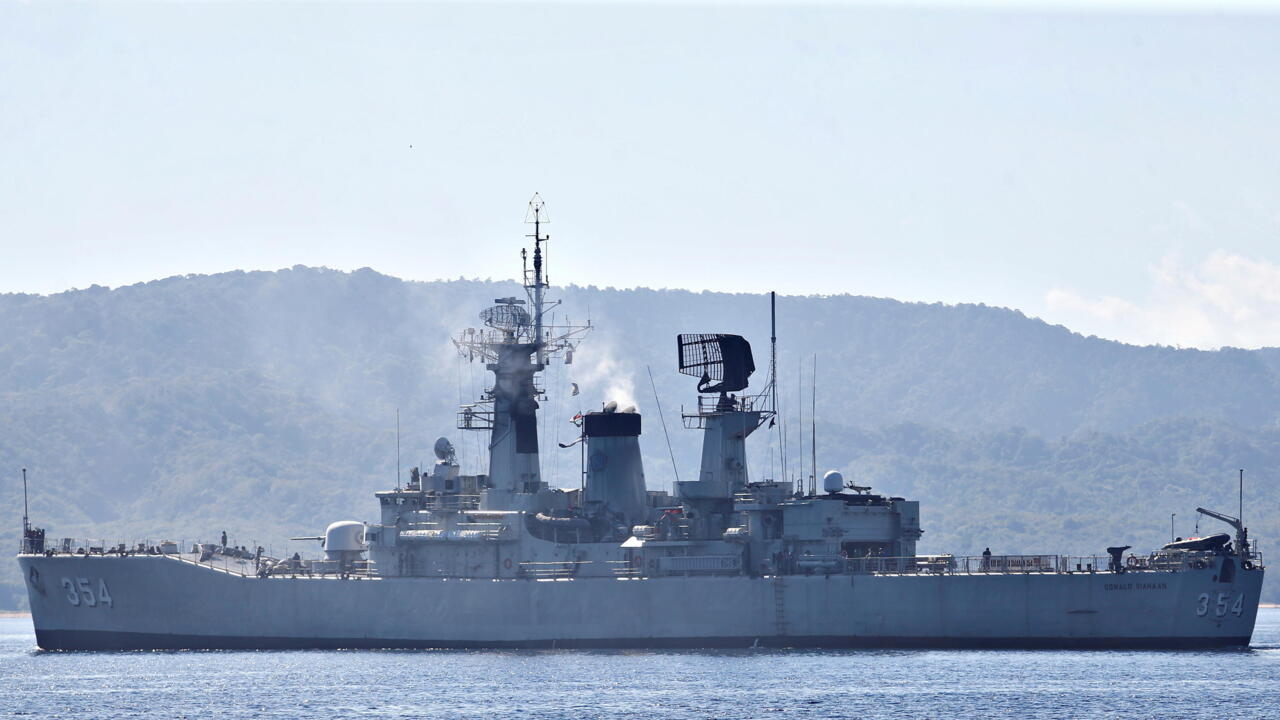 The KRI Oswald Siahaan-354 of the Indonesian navy leaves the port of Tanjung Wangi in search of the submarine KRI Nanggala-402, which disappeared in Banyuwangi, on April 24, 2021. REUTERS - AJENG DINAR ULFIANA

which had sunk off the island of Bali and confirmed that the 53 members of its crew were all dead.

Broken into three parts, the submarine, which we had not heard from since Wednesday, was spotted in the seabed off the same island in central Indonesia, according to Navy Chief of Staff Yudo Margono.

Authorities said they received signals early Sunday morning from where the submarine is located, more than 800 meters deep, making the search particularly difficult.

An emergency submersible provided by Singapore was used for visual confirmation.

New items from the

were discovered on Sunday, including an anchor and safety suits worn by the crew.

On Saturday, the navy found fragments of the submarine and several objects from it, but its location could not be confirmed.

She had declared that he had "

", a way of saying that she had no hope of finding any survivors.

, a 40-year-old German-built submersible, had requested permission to dive for military maneuvers including torpedo fire, before disappearing north of Bali.

Hundreds of soldiers, planes and warships were mobilized to locate him, hoping for a miracle before oxygen supplies ran out, which was scheduled for Saturday morning.

Neighboring Malaysia, the United States, India and Australia provided assistance for the research which focused on an area of ​​some 30 square kilometers.

Even before the submarine was spotted, Indonesian President Joko Widodo offered his condolences to the families of his crew on Sunday.

To read also: Indonesia: according to the Navy, the missing submarine sank

According to the Indonesian Navy, the submersible, delivered to Indonesia in 1981, was in good condition for service despite its age.

This model is used by ten navies around the world.

Authorities did not give an official explanation for the crash, but suggested the submarine may have suffered a power outage, preventing the crew from resurfacing.

However, they ruled out the possibility of an explosion, saying on Saturday that the clues suggested that the building had disintegrated, because it had been crushed by the pressure of the water to a depth of more than 800 meters, at which it was not designed to resist.

The hulls of the submarines are pressurized ... but when they are pierced, water gets inside,

Can you imagine people being subjected to water under such pressure?

" if it reached depths well beyond its limits .

This type of submarine is made to withstand pressure up to 300 or 400 meters deep.

In 2000, the nuclear-powered submarine Kursk, the flagship of the Russian Northern Fleet, sank during maneuvers in the Barents Sea (north-western Russia), resulting in the death of 118 members of its crew.

, with 44 sailors on board, disappeared some 400 kilometers from the coast.