After Biden confessed to "the Armenian genocide" ... Turks protest in Washington, and the American embassy warns its citizens in Turkey

Turks demonstrated in Washington to denounce US President Joe Biden's admission that what happened to the Armenians 100 years ago was genocide during the Ottoman era, while the US embassy in Ankara warned its citizens of protest demonstrations. 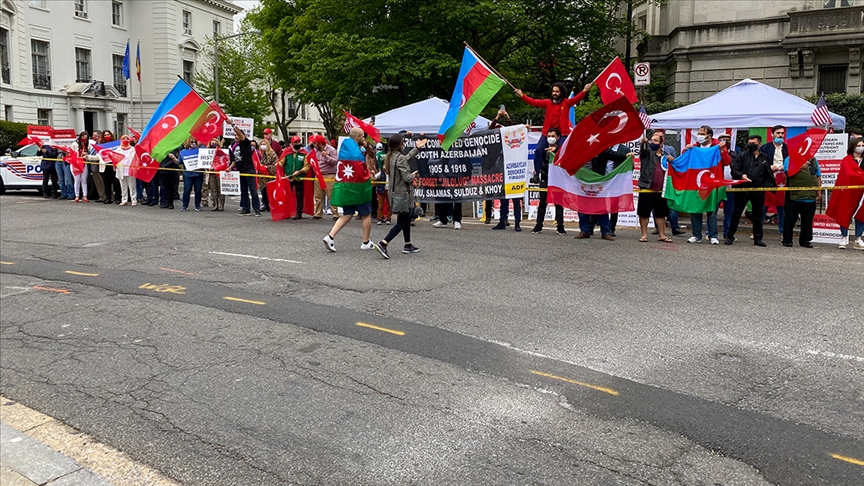 Dozens of Turks organized a protest stand in the American capital, Washington, to denounce US President Joe Biden's admission that the 1915 massacres of Armenians during the Ottoman Empire constituted genocide, while the US embassy in Ankara warned its citizens of protest demonstrations.

Turkish demonstrators gathered in front of their country's embassy in Washington, waving banners and flags of Turkey to protest Biden's statement.

On the other hand, a pro-Armenian group organized a demonstration on the opposite side of the Turkish protest.

Earlier on Saturday, Biden described the events of 1915 as a "genocide" of Armenians, in contravention of the traditions of his predecessors, the established US presidents, of refraining from using the term.

The US Congress recognized the Armenian genocide in December 2019 in a symbolic vote, but President Donald Trump refused to use this phrase and contented himself with "one of the worst mass atrocities of the 20th century."

Biden said - in a statement released by the White House - that "the goal is not to lay the blame, but to ensure that what happened does not happen again."

On the other hand, a US official said that Biden wants to work closely with Erdogan, and that is why he suggested holding a meeting with him on the sidelines of the NATO summit next June.

Reuters quoted the official as saying that Turkey remains a vital NATO ally, and that Washington is seeking a strong relationship with it.

The US embassy in Ankara warned its citizens of upcoming demonstrations to protest the US position on the issue of "the Armenian genocide" in the Ottoman era.

"Demonstrations or protests may occur in the wake of the White House statement on April 24, which recalls the souls of all those who died in the genocide of Armenians in the Ottoman era," the embassy said in a security warning on its website.

The embassy confirmed that it would close its doors on the next Monday and Tuesday, as a precaution.

For its part, the Turkish Foreign Ministry said that it had summoned the US ambassador, David Satterfield, to Ankara to inform him of an official protest against Biden’s decision.

The Turkish Foreign Ministry confirmed that Biden does not have the legal right to judge historical issues, and his statements about the alleged "genocide" of Armenians are worthless.

The Turkish ministry said - in a statement - that the Deputy Foreign Minister, Sadat Onal, informed the US ambassador that the statement had no legal basis and that Ankara rejected it as unacceptable and condemned it in the strongest terms.

The spokesman for the Turkish presidency, Ibrahim Kalin, said that "Biden's statements are disappointing and have no value to Turkey."

Kalin stressed - in a statement - his country's categorical rejection and condemnation of these statements, which reflect the extent of the slanders of these malicious circles whose only concern is anti-Turkey.

He pointed out that President Recep Tayyip Erdogan had previously called for the establishment of a joint commission to investigate the events of 1915, in order to save a historical issue from the shadows of politics and malicious parties.

And he added, "However, those who fear revealing historical facts supported by documents and evidence did not respond to President Erdogan's call, and President Biden ignored these facts and took an unfair stance."

In conclusion, Kalan stressed that Turkey will always defend its rights in the face of those who wish to distort historical facts.