"Baseless accusations": Russia responded to US statements of "destabilizing actions"

Charge d'Affaires of the Russian Federation to the United States, who was summoned to the State Department, denied groundless accusations against Moscow regarding its "destabilizing actions" in the Euro-Atlantic region. This was reported by the Russian embassy in the United States. Earlier, the State Department said that it intends to express concern about the "actions" of Russia, including on the territory of NATO, as well as "to demonstrate full support for the Czech Republic." According to experts, the United States does not abandon its attempts to consolidate the West on an anti-Russian basis. In addition, according to analysts, Washington is trying to disguise its internal socio-economic problems in this way. 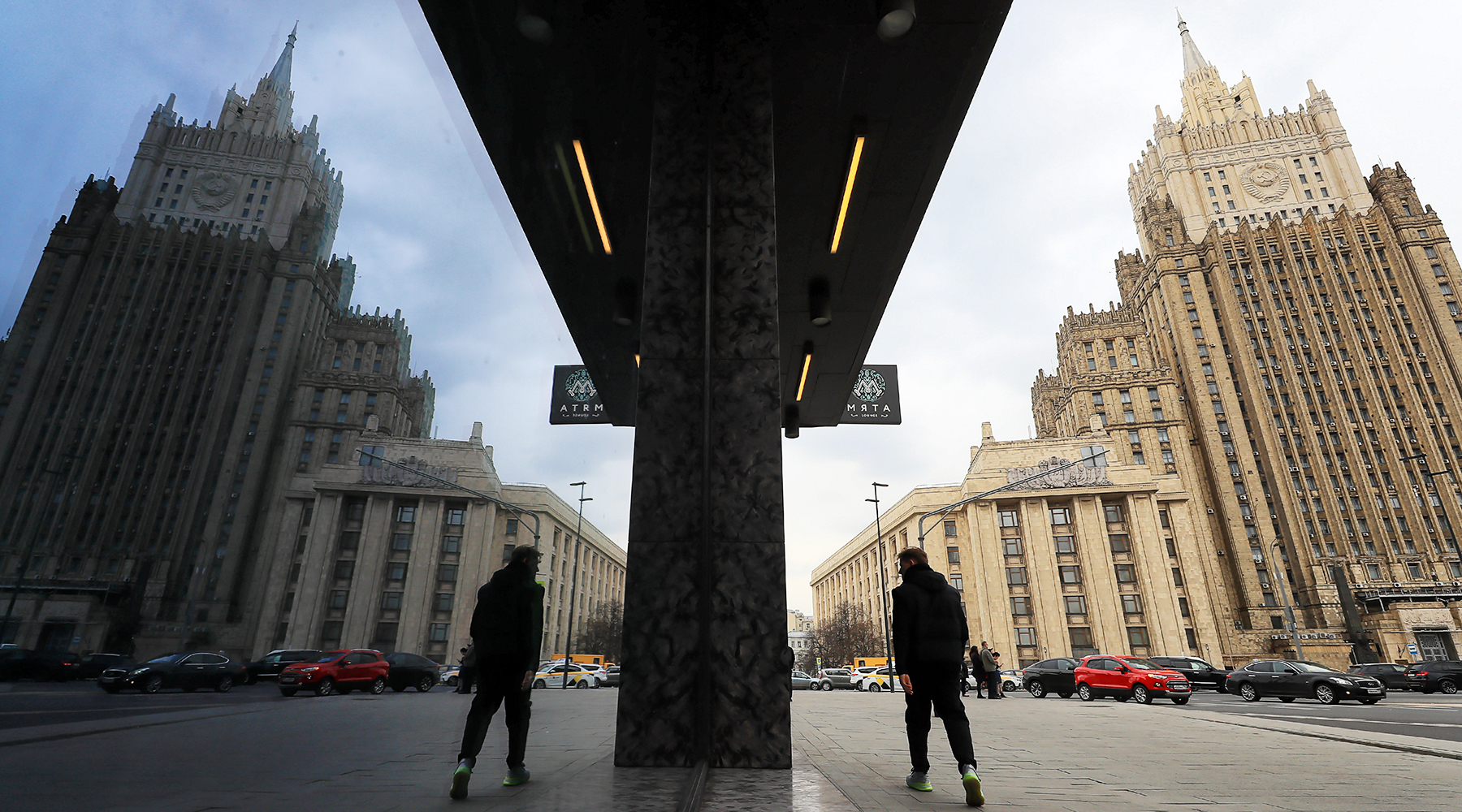 Russia has firmly rejected the baseless accusations of the United States regarding its allegedly destabilizing actions in the Euro-Atlantic region.

This was announced by the Russian Embassy in the United States on its Twitter page.

"Today, Russia's Charge d'Affaires to the United States took advantage of a meeting at the State Department to firmly refute groundless accusations against Russia regarding destabilizing actions in the Euro-Atlantic region," the diplomatic mission said in a statement.

🇷🇺🇺🇸 Today, the Russian Chargé d'Affaires used the meeting in @StateDept to strongly reject groundless allegations against @Russia on destabilizing actions across the Euro-Atlantic area.

At the same time, earlier, the Bureau of the State Department for European and Eurasian Affairs informed that Washington had summoned the Charge d'Affaires of the Russian Federation in the United States in order to “express to him concern about the destabilizing actions that Russia continues to carry out in the Euro-Atlantic region, including on NATO territory, and also show full support for the Czech Republic. "

We will remind, last week the Czech Republic accused the intelligence of Russia of involvement in the explosions at ammunition depots in Vrbetica in 2014.

The Kremlin stressed that they categorically "do not agree with such conclusions" and consider them "provocative and unfriendly."

Meanwhile, the refusal of the Czech side to publish details of this incident, Russian Foreign Ministry spokeswoman Maria Zakharova called proof that the information provided by Prague was "a dirty, disgusting fake."

A diplomatic scandal also erupted between the Czech Republic and Russia - at first, Prague announced the expulsion of 18 Russian diplomats, in response to this, the Ministry of Foreign Affairs of the Russian Federation declared 20 diplomatic workers of the republic persona non grata.

As a result of the actions of the Czech authorities, who later announced a further reduction in the number of Russian diplomats, Moscow demanded to reduce the staff of the Czech Embassy in the Russian Federation "taking into account the significant disparity."

As Maria Zakharova summed up at a briefing on April 22, Russia has now reached the next stage of unfriendly steps on the part of Western countries.

“This is the expulsion of Russian diplomats and accusing them of all sorts of nonsense that has no foundation or facts.

This is seasonal in the West.

Something happens in the political "nature" of these countries and the "aggravation" begins.

Therefore, we will survive this too.

It is another matter that they are not striking a blow at us, but at bilateral relations, "the representative of the Russian Foreign Ministry emphasized.

It is worth noting that the summons to the State Department of the Charge d'Affaires of the Russian Federation in the United States due to the scandal associated with the Czech Republic and the allegedly destabilizing activities of Moscow is not the first anti-Russian attack by Washington in recent years.

So, in mid-April, Joe Biden signed a decree providing for sanctions against 32 Russian individuals and legal entities and six technology companies.

Such a measure in the administration of the American president was explained by the intention to impose on Moscow "the costs for actions directed against the sovereignty and interests of the United States."

In addition, Washington announced the expulsion of ten Russian diplomats.

After that, the Russian Foreign Ministry published its list of retaliatory steps in view of the "hostile actions of the United States."

“The next attack on our country undertaken by the Biden Administration, of course, cannot remain unanswered.

Washington, it seems, does not want to put up with the fact that in the new geopolitical realities there is no place for unilateral dictatorship, and the bankrupt scenarios of "containment of Moscow", on which the United States continues to shortsightedly stake, are fraught with only further degradation of Russian-American relations, "they said in Russian Foreign Ministry.

The Russian Foreign Ministry also stressed that as countermeasures to anti-Russian sanctions, the expulsion of United States diplomatic missions will soon follow "in an amount commensurate with the action carried out by the American authorities against Russian diplomats."

In addition, the practice of using the US Embassy "short-term seconded by the State Department to ensure the functioning of diplomatic missions" will be limited.

In addition, the Russian side will take measures to completely stop hiring administrative and technical workers by American diplomatic missions.

It is also planned to interrupt in the Russian Federation the activities of funds and NGOs controlled by the State Department and other government agencies of the United States.

"This work, which has been carried out for a long time and systematically, will be brought to an end, especially against the background of the fact that the United States does not intend to reduce the scope of its subversive efforts, carried out systematically based on an extensive legislative base," the diplomatic department explained.

Meanwhile, Duleep Singh, Deputy Assistant to the President for National Security of the United States, commenting on the results of the anti-Russian sanctions, spoke about Washington's intention to demonstrate to Moscow the White House's ability to inflict even greater damage.

“We set out to act proportionally, take a focused approach, and also make it clear that we have the ability to force Russia to pay a much higher price if it continues this behavior or escalates,” he told Reuters in an interview.

According to Singh, at the moment "the results are quite close" to those expected by the American side.

) is simply a tool that can contribute to the implementation of the strategy, in this case, by influencing the diplomatic process.

In the case of Russia, the goal of this process is to achieve more stable and predictable relations, ”the official explained.

At the same time, the ex-US ambassador to Ukraine William Taylor called the new restrictions of the United States quite painful for the Russian side.

“These sanctions on the public debt just mark the transition to a new stage.

So far, the restrictions apply only to the primary market, but they can also seriously affect the desire of a number of market players to lend money to Russia.

What is important, sanctions may subsequently spread to secondary markets, and President Biden left this opportunity, ”Taylor said in an interview with the Ukrainian newspaper NV.

"Any accusations are used"

However, according to experts, US representatives "are seriously exaggerating the effect of the White House's sanctions policy."

“After all, the main goal of American restrictions against Russia is to change the line of its behavior, the trajectory of foreign policy, while the maximum task is to change the government in the Russian Federation.

Sanctions are one of the elements of the overall strategy of the United States to undermine Russian statehood.

However, until now Washington has not been able to achieve any of these goals, "said Konstantin Blokhin, a leading researcher at the Center for Security Studies of the Russian Academy of Sciences, in a conversation with RT.

According to him, it is for this reason that the United States "began to pull other Western countries into the sanctions war with Russia," trying to consolidate them on this basis.

Blokhin noted that Washington "is escalating the situation with its anti-Russian actions."

“The United States stubbornly continues to support this course, striving to initiate a new Cold War with the Russian Federation.

As far as I know, some American experts are frankly writing about this, and also note the need to strengthen the policy of containing Russia.

And here any accusations come into play, regardless of whether they have evidence and evidence, ”the analyst says.

A similar position is shared by the American political scientist Malek Dudakov.

In an interview with RT, he stressed that all the actions of the United States and its partners "fit into the concept of Biden's policy, who is trying to show that he has to restore the Euro-Atlantic consensus after Trump."

“The head of the White House wants to demonstrate that he prioritizes the interests of his NATO partners, including the Czech Republic.

Accordingly, if Russia allegedly threatens the Czech Republic, then the United States will stand on its side, ”says Dudakov.

From the point of view of Konstantin Blokhin, if until now, within the framework of the sanctions war unleashed by Washington, there was "a game with almost one goal," now Russia "has taken up countermeasures more closely."

“This time, Moscow has toughly responded to the US sanctions.

It is quite possible that Russia will continue just such a course, ”the expert admits.

In addition to the desire to unite the countries of the West, another reason for the anti-Russian attacks by the United States was the intention to mask the socio-economic problems within the country and in the Western states in general, including those caused by the pandemic, Blokhin said.

“Social inequality is growing, and in this situation the simplest thing to do is just to“ switch the arrows ”to Russia,” the analyst noted.

Blokhin also predicted that in the future, the Western countries, led by the United States, "will only tighten their anti-Russian policy."

“It is already clear that these states are not ready to normalize relations with Russia.

However, at the same time, they will not interrupt all ties concentrated in mutually beneficial areas.

The collective West will continue to tickle the nerves of the Russian Federation along the perimeter of its borders, strengthen restrictions, and financially help Ukraine, "the analyst believes.

Malek Dudakov, in turn, claims that the possibilities of sanctions pressure on Russia from the collective West, led by the United States, "have practically dried up" and this has become a problem.

“Washington is not ready to disconnect the Russian Federation from SWIFT and impose an oil embargo, since this will hit first of all the American business, which operates in Russia. It will also have an extremely detrimental effect on the dollar system, which is not stable under the current conditions. Apart from these measures, the US and the West as a whole have almost nothing left in their arsenal, ”Dudakov concluded.