Drawing: Li Xueyao   Today is the sixth China Space Day,   The name of China's first Mars rover was announced in Nanjing.   After the global call for names, expert review, online voting and other layers of selection,   The final review result is set:   Zhu Rong!   Zhu Rong is revered as the earliest fire god in traditional Chinese culture,   It symbolizes that our ancestors used fire to ill 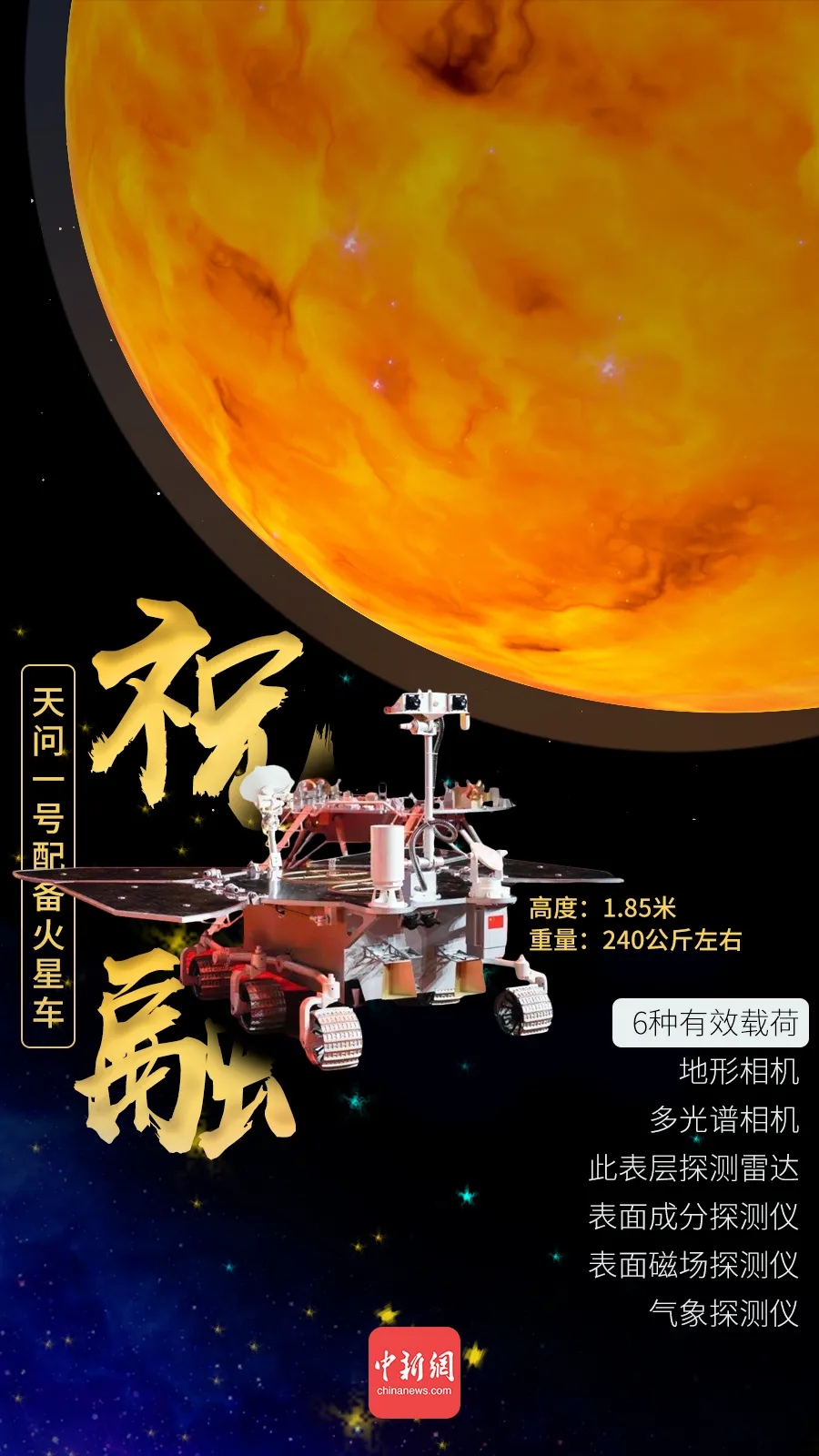 The name of China's first Mars rover was announced in Nanjing.

After the global call for names, expert review, online voting and other layers of selection,

The final review result is set:

Zhu Rong is revered as the earliest fire god in traditional Chinese culture,

It symbolizes that our ancestors used fire to illuminate the earth,

It means to ignite the fire of interstellar exploration in our country,

The unknown continued exploration and self-transcendence of the universe.

Is there any other life on Mars?

Is it possible to "migrate" to Mars in the future...

Carrying the wisdom and expectations of countless people,

"Zhu Rong" left the embrace of the earth,

What is "Zhu Rong" busy with during the space journey?

It has been more than a few months now,

"Zhu Rong" was not idle at all,

The pace of work can be said to be very tense!

Tianwen-1 sent back the first image of Mars.

With the assistance of Tianwen No.1,

They sent back the first image of Mars for Earth.

In the picture, the Plain of Ashidaria on Mars,

The iconic landforms are clearly visible.

Many aerospace fans are excited.

Mars orbit detection has been achieved.

During this time, they observe the landing site,

Landforms and whether there are environmental conditions such as sandstorms,

To prepare for this year's selection of an opportunity to implement Mars landing exploration.

It is understood that

Off-orbit landing is the key to the success or failure of the Mars exploration mission.

Especially from entering the Martian atmosphere to landing,

There is a world-famous "7 Minutes of Horror".

In the current more than 40 Mars exploration missions in the world,

Only 9 times have been able to spend these 7 minutes safely.

Such an excellent Tianwen No.1,

The rover on board,

How can there be no name?

In order to name it, this year's netizens spelled it

The Long March 5 carrier rocket was successfully sent into the intended orbit.

The probe flew for several months and finally reached Mars.

After a successful soft landing,

The rover will stay on the surface of Mars,

Carry out scientific exploration tasks such as inspections and surveys.

On the second day of the launch of Tianwen-1,

The global naming campaign for the rover also started.

After the news was announced,

Netizens have a lot of thoughts and enthusiasm.

Played the rhythm of "going to heaven",

Names such as "Dare to Detect" and "Hot Wheels" were proposed.

The mars rover naming activity is divided into the solicitation of name submission,

Weighted assessment of the top three and four stages,

Finally, the results will be announced after approval.

On January 18 this year,

After review and voting by the review committee,

Ten names such as Tianxing and Xinghuo,

Stand out from nearly 40,000 valid nominations,

Selected as one of the top ten global preliminary assessments.

After that, through 40 days of public online voting,

The name of China's first Mars rover was announced in Nanjing.

How does "Zhu Rong" work?

What is a rover?

The rover is launched by humans and travels on the surface of Mars.

And a vehicle for investigation.

The rover carries important missions such as patrol and exploration of the surface of Mars,

Open the door to Mars for China,

The rover will work on the surface of Mars for more than 90 days,

In addition to detecting operations,

It will also transmit back to Earth what you have seen and heard in space.

The square box on top of the rover,

Are the "eyes" of the rover,

Which is the camera,

And to identify the mineral composition.

It is also equipped with solar panels.

The rover is also equipped with detection radar,

Can carry out a full range of exploration of Mars...

Carrying the concentrated accumulation of several generations of scientists,

From the Chang'e series of lunar exploration trips,

Across the sea of ​​stars,

Coming just to come to you!