With Ice Cream Rolls to millions of Youtube fans

Many young people dream of a successful YouTube channel. Gil Grobe from Hamburg did it. He is not even seen in his video clips. 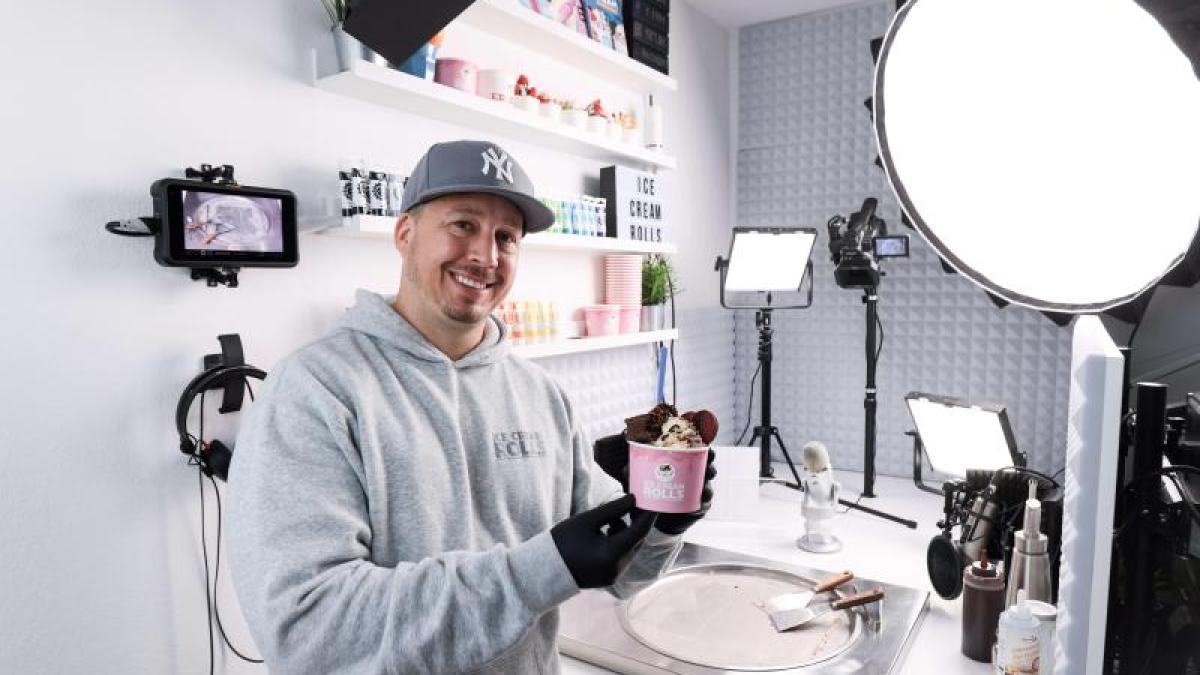 Hamburg (dpa) - They are called Pringles & Caramel, Brownie & Oreo, but there is also ice cream with pizza, hamburgers or sushi: Gil Grobe from Hamburg reaches an audience of millions with his unusual ice cream creations on the YouTube channel “Ice Cream Rolls” all over the world - especially in Asia and the USA.

Now the 40-year-old has reached the sound barrier of ten million subscribers on the video platform - and is one of only four Germans who have made it.

As a reward there is the “Diamond Play Button” from Youtube.

"I didn't expect that at all," says Grobe of the German Press Agency in his Hamburg studio about his own success story.

It all started six years ago on a trip to Thailand.

“A crowd of people had formed around a small stall on the street, and something very spectacular seemed to be going on there,” Grobe recalls.

What fascinated people so much: the preparation of so-called ice cream rolls.

On a plate at a temperature of minus 30 degrees, liquid ice is smoothed several times with spatulas and mixed with ingredients such as crushed fruit.

When the layer is thin enough, the ice cream freezes and is scraped off the plate in the form of small rolls and served.

“I filmed that with my cell phone, and that was basically the start of everything,” says the likeable baseball cap wearer.

He put this video online on social media and it went viral relatively quickly.

"This is basically how the canal was created."

You can actually make money with moving image content on the Internet. "

He got inspiration for his videos on a trip to New York.

"I looked at some ice cream parlors there that already sell ice cream rolls."

At first he experimented with a simple frying pan that he put in a freezer, but that was too complicated in the long run.

It wasn't until he ordered a professional ice cream machine from China that things could really get going.

Grobe and his team now upload a new video every day that he creates at home in his studio. However, he cannot be seen in the videos, only his hands are in the picture. He quit his job in a marketing agency for a long time and started his own business. Most of the revenue comes from advertising that appears on the internet before and during the videos.

But what excites people around the world about videos about ice cream that they can't even make themselves because they don't have the ice cream machine? For Gil Grobe, there are three main things: “We have a consistently positive topic: everyone likes ice cream,” he says. In addition, it is a new process for making ice cream that has never been seen before: "That fascinates people." The entrepreneur names the new hype “ASMR” (Autonomous Sensory Meridian Response) as the third factor: This triggers feelings in a body that are generated by sounds.

Gil Grobe has enough ideas - also for other YouTube channels.