The need for hospital care for covid patients is expected to increase further in the coming weeks. But several regions are already reporting that the situation is at the limit of what they can handle. "Health care is experiencing an overwhelming burden," writes the County Administrative Board in Stockholm. 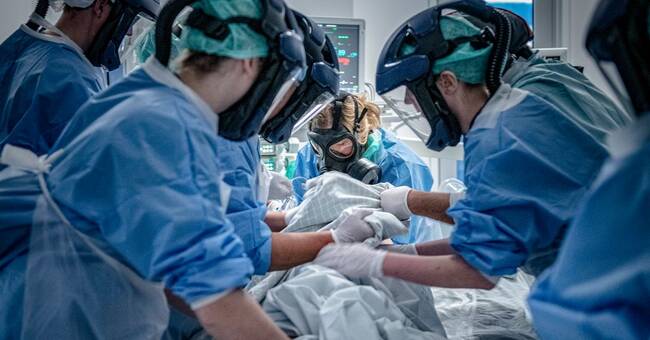 It is a gloomy picture that emerges in the last week's reports from the country's county administrative boards.

Several talk about how healthcare is being pressured hard by more and more patients at the same time as the spread of infection is increasing.

"The care system is very stressful and has small margins," writes the County Administrative Board in Stockholm.

The picture is shared by the Government Offices, which in its status report for the past week states that

"The burden on seriously ill patients is overall higher than the level noted last spring".

Uppsala is one of the regions that describes the situation as serious.

The influx of covid patients was record high this weekend.

"The pressure on healthcare is extremely high and the region estimates that the need for intensive care units will increase further," they state.

In the Dalarna region, the workload has been high for a long time and they have repeatedly been forced to send patients to other counties because their own healthcare is not able to take care of everyone.

"In IVA and covid departments, there is a shortage of staff and certain medical equipment," writes the County Administrative Board of Dalarna in its report.

At the same time, there are signs that the burden on healthcare in Dalarna will be even higher.

"The spread of infection in Dalarna continues to increase sharply this week as well," they write.

Common to several regions is that they continue to describe the staff situation as strained.

"The staff in the health care system are tired and tired," writes Skåne.

"There are signs of exhaustion," writes Gävleborg.

At the same time, many are now preparing for the situation to worsen further in the near future.

Several state that they have plans to increase the number of intensive care units, although this will require even more staff.

“The peak is not judged to have been reached.

Personnel have been redistributed from education ", research and administration, writes the County Administrative Board of Södermanland.