The UAE has expressed its strong condemnation and condemnation of the attempts of the Iranian-backed terrorist Houthi militia to target civilians and civilian objects in a systematic and deliberate manner in Khamis Mushait in the sisterly Kingdom of Saudi Arabia, through an aircraft bomb, intercepted by the coalition forces, or 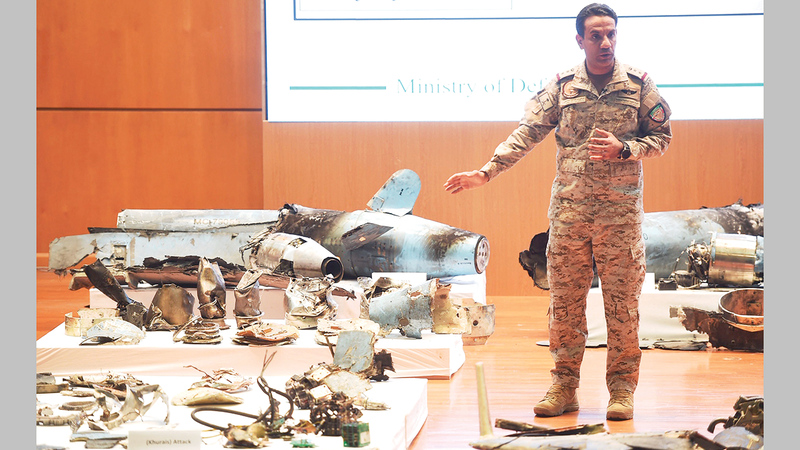 The coalition explained that the hostile Houthi militia's attempts are systematic and deliberate to target civilians and civilian objects in Saudi Arabia.

The UAE has expressed its strong condemnation and condemnation of the attempts of the Iranian-backed terrorist Houthi militia to target civilians and civilian objects in a systematic and deliberate manner in Khamis Mushait in the sisterly Kingdom of Saudi Arabia, through a booby-trapped plane, which was intercepted by the coalition forces yesterday, while the joint forces shot down a drone and demolished fortifications To the Houthis in the vicinity of Al-Duraihimi, and inflicted deaths on them, including a prominent field leader.

In detail, the UAE confirmed, in a statement issued by the Ministry of Foreign Affairs and International Cooperation, that the continuation of these terrorist attacks by the Houthi group reflects its blatant challenge to the international community and its disregard for all international laws and norms.

The Ministry urged the international community to take an immediate and decisive stance to stop these repeated actions, which target vital and civilian installations and the Kingdom's security, energy supplies and global economic stability, stressing that the continuation of these attacks in recent times is a dangerous escalation, and new evidence of these militias' endeavor to undermine security. And stability in the region.

The Ministry renewed the UAE's full solidarity with the Kingdom regarding these terrorist attacks, standing with it in one line against every threat to its security and stability, and supporting it in all measures it takes to preserve its security and the safety of its citizens and residents on its territory.

The Arab Coalition to Support Legitimacy in Yemen announced yesterday the interception and destruction of a car bomb march launched by the Houthi militia towards Khamis Mushait in the Kingdom of Saudi Arabia.

The coalition stated that the hostile Houthi militia's attempts are systematic and deliberate, to target civilians and civilian objects in the Kingdom of Saudi Arabia, stressing that the necessary operational measures are taken to protect civilians in accordance with international humanitarian law.

For its part, the Yemeni army forces and the tribes backed by the Arab coalition thwarted, at dawn yesterday, an attack by the Houthis from two axes towards the "Al-Tala Al-Hamra" area, west of the Ma'rib governorate, and inflicted heavy losses on them.

Field sources reported that the Houthi militia was advancing towards the "red dash" from the Ma'rib-Sanaa road, and the army and tribes in the Al-Balqa Al-Qibli and Tha-Ra'a regions confronted it, and inflicted heavy losses with the support of the coalition fighters, which launched a series of raids on Houthi vehicles in those areas.

According to the sources, the battles took place between the two sides, to the west and north of the "Red Tala", before the army and tribes were able to break the attack after the arrival of army reinforcements from Shabwa and Al-Bayda across the Al-Jufina area, indicating that the Houthi attack came in response to their defeat in the mountain range. Science », between the breaker and the shaker, that has been completely edited.

The sources pointed out that the militias had failed to surround the "Red Tala" area, and had suffered great losses among their elements and combat vehicles.

The "Red Tala" area is of great strategic importance, as it is located between the Ma'rib-Al-Jawf road in the north, and the Ma'rib-Sanaa road in the south, and towards the Sarwah district.

The "red flight" is a high and fortified area that overlooks and secures the two roads, and whoever controls it imposes firepower on the northern and southern roads. It is a fortified fortress, with trenches, bunkers and large defenses for the Yemeni army.

On the Al-Mashjah front, battles continued between the two sides, in conjunction with specific raids by the coalition fighters, during which they managed to destroy an armored vehicle and Houthi reinforcements that were on their way to the front, and in other raids they targeted militia groups in separate locations west of Ma'rib and in Al-Jadaan and the two districts of Medghal and Majzar, all of which resulted in Large human and material losses among the Houthis.

In addition, a militia warehouse was destroyed in the Hilan mountain range, and coalition fighters targeted Houthi reinforcements east of Bir Al-Marazeeq in the Khub Washaf district in Al-Jawf governorate.

On the southern front of Ma'rib, the army and tribes repelled an attack by the Houthis in the Haid Al Ahmed front, between the Jabal Murad and Rahba districts, and inflicted heavy losses on them.

For his part, the Chief of Staff of the Yemeni Army, Commander of the Joint Operations, Lieutenant General Saghir bin Aziz, affirmed his confidence in the proximity of victory, and his celebration in Al Sabeen Square in the capital, Sana'a.

In Sanaa, local sources confirmed that the Houthi militia drove vehicles with loudspeakers calling on the city’s residents to supplement the Marib fronts with fighters, to compensate for their recent losses, and after the Khawlan tribes refused to invite the militia’s leader, Abdul-Malik al-Houthi, to mobilize more fighters.

The sources indicated that Sanaa's hospitals are filled with the bodies of the dead Houthis, who fell on the fronts of Ma'rib, Al-Jawf and other fronts, in addition to hundreds of wounded.

And in Al-Bayda, the local resistance in Hazmieh, Al-Souma District, launched a specific attack on Houthi positions in the Doman family, inflicting heavy losses on them, and seizing weapons, wireless devices and night vision goggles.

In Al-Jawf, sources in the governorate's Rights and Information Committee said that the Houthi militia continued to plant mines in public roads, agricultural areas and village entrances in areas under their control, threatening the lives of civilians and restricting their movements.

In Hodeidah, the combined forces, the Houthis, suffered many deaths and injuries, after targeting their barracks in the vicinity of the city of al-Durayhimi, south of Hodeidah, in response to the targeting of civilians in the district, according to field sources, noting that among the dead was a prominent Houthi leader named Abadi Abd al-Bari al-Ghalisi, the supervisor of the militia. In the district of Hays.

The sources confirmed that the joint was able to shoot down a Houthi bombed drone east of Al-Durayhimi, and destroyed fortifications and barracks, and targeted Houthi movements around the city, in response to its targeting of residential neighborhoods in the district.

The militias had continued their violations of the UN armistice, and bombed residential areas in al-Durayhimi, al-Tuhayat, Hays and east of Hodeidah.

• The Foreign Ministry’s statement affirmed that any threat or danger facing Saudi Arabia is considered by the UAE as a threat to its security and stability system.