In India, more than 200,000 new infections a day have been diagnosed in recent days. The death toll has been around 1,000 a day, although official figures have been questioned by many experts and the Indian media. 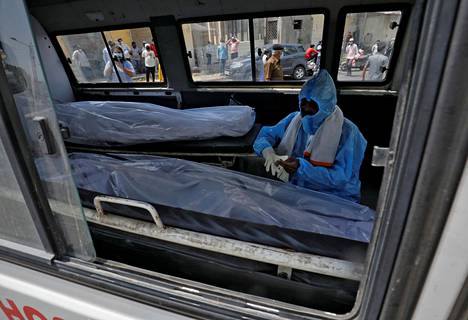 Patients are being turned away from hospital doors, crematoria are operating at full capacity and the situation in India, which is in the grip of a second wave of the coronavirus epidemic, is getting worse, the BBC reports.

Vimal Kapoor, a 70-year-old mother living in Varanasi, died of a coronavirus disease on Thursday.

Kapoor described the situation as frightening.

Hospitals turn patients on because they don’t have beds, pharmacies have run out of drugs important to treat covid-19 disease, and there is a shortage of oxygen, Kapoor said.

When he took his mother's body to the crematorium, he saw a pile of bodies.

Wherever you look, you will see ambulances and corpses.

A man in a protective suit sits in an ambulance with the bodies of two coronavirus patients. Photo: AMIT DAVE / Reuters

The highest number of new coronavirus infections was detected during the entire epidemic on Sunday, when more than 275,000 new infections were recorded in the statistics, the Worldometer says.

More than 102,000 new infections were recorded on Tuesday, according to the Indian Ministry of Health.

According to Worldometer figures, the incidence of the Indian coronavirus is 189 new infections per 100,000 people.

The corresponding figure for Finland is 79.9.

The figures may differ slightly from those of the national authorities, as in Finland, for example, the Department of Health and Welfare corrects the figures retrospectively.

There were 1,761 new deaths in India on Tuesday.

However, there is no absolute certainty about how bad the epidemic is, as not all those who died in the corona are expected to end up in official figures.

For example, Kapori's mother's death certificate makes no mention of the coronavirus.

The situation is particularly bad in Uttar Pradesh, the largest state in India with a population of over 200 million.

The Ndtv reported last week that in seven days, state officials had reported 124 people died of the disease caused by the coronavirus.

However, according to the city’s crematoria, more than 400 people had died of covid-19 disease.

According to health authorities, the difference in figures is explained by the fact that those from other states are also cremated in Uttar Pradesh.

Ambulances taking coronavirus patients for treatment had to queue for access to a hospital in Ahmedabad. Photo: AMIT DAVE / Reuters

There are also uncertainties in other states about how many have actually died of covid-19 disease.

For example, in Surat, Gujarat, more than 100 bodies were cremated daily in just two crematoria according to the covid-19 protocol.

The Covid-19 protocol is used when a person to be cremated has confirmed or suspected coronavirus infection.

Authorities have blamed the discrepancies in the figures for, among other things, crematoria cremating people for safety using the covid-19 protocol, even if there is no certainty about coronavirus infection.

However, the number of deaths also seems to have increased.

In Surat, a spokesman for the Ashwinikumar Crematorium Foundation, Prashant Kabrawala, declined to say how many bodies had been cremated by the covid-19 protocol.

However, he said the cremations had tripled in recent weeks.

- I regularly visited crematorium since 1987 and been involved in its daily operations since 2005 and I have never seen so many corpses coming to ashes habit all these years, Kabrawala said, noting that before the koronavirusepidemiaa area had also suffered, inter alia, the plague in 1994 and the devastating floods of 2006.

The Lancet estimated last fall that four states, which accounted for 65 percent of all covid-19 infections, had registered 100 percent of coronavirus deaths.

The states were Maharashtra, Tamil Nadu, Karnataka and Delhi.

Bhramar Mukherjee, professor of biostatistics and epidemiology, told CNN that an accurate picture of the coronary situation in India is still not available.

- The majority of deaths are not recorded, so it is impossible to computationally confirm the data.

Oxygen cylinder cylinder at a factory in Prayagraj, Uttar Pradesh.