On Thursday, the government will appoint ex-Minister of the Environment, the current Secretary of State Kimmo Tiilikainen (Central) of the Geological Survey of Finland (GTK), who has been expelled from Parliament. This is a solid political position, and there will be many more on the board - a record number, says Special Editor Timo Haapala. 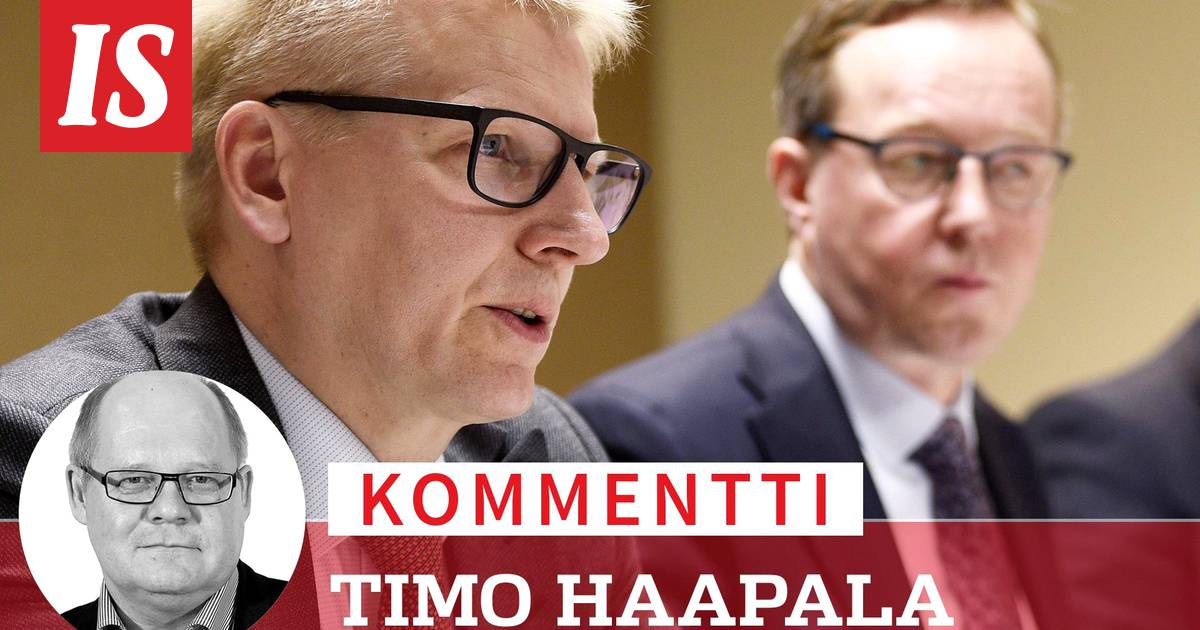 The government inherited from Prime Minister Sanna Marini (sd) Antti Rinte (sd) has set many kinds of records in many fields, but now it is also setting a new record for a long time in the field of shameless political appointments.

Political appointments have been overshadowed by the fact that the government is also expecting actual ministerial recalls, which, however, will probably only be allowed for a framework debate, perhaps only after the municipal elections.

Most annoying is when the chairman of the center, Minister of Science and Culture Annika Saarikko, will take over the position of Minister of Finance, who will be vacated from Matti Vanhanen (center).

Vanhanen's new house in Nurmijärvi is ready, and he reportedly wants to leave the government as soon as possible.

But assistants and secretaries of state first!

Marin's government has about a hundred special assistants and a number of high-paid (over 10,000 euros / month) political secretaries of state.

More than ever before.

A couple of years ago, three parliamentarians who had dropped out of parliament were also appointed secretaries of state, who, after being dropped from parliament and political mistrust, received almost double their salary and state car with drivers.

One of them is Juha Sipilä's (central) government's Minister of the Environment Kimmo Tiilikainen (central), who found a new position as Minister of Economic Affairs Mika Lintilä (central) and Minister of Agriculture Jari Lepä (central) State Secretary.

On Thursday, the Board will appoint Tiilikainen as the Director General of the Geological Survey of Finland (GTK).

With the post, Minister of Agriculture and Forestry Tiilikainen will also receive the title of professor.

A similar, perhaps even more political, appointment was also seen in 2014, when the Coalition Minister for Economic Affairs Jan Vapaavuori appointed Mika Nykänen, a former Coalition truck, to head GTK.

It is therefore pointless to emphasize that Tiilikainen's appointment is completely closed-ended.

The appointment will be presented and decided by Minister of Economic Affairs Lintilä.

As for Tiilikainen, there is also a touch of comedy in the situation, as in the autumn he was not qualified as the mayor of Ruokolahti in his hometown.

The need for political secretaries of state was emphasized so much a couple of years ago that it seemed that the kingdom would not be able to do without them at all.

It seems to be going well, as the secretaries of state are now applying for a number of other positions.

Prime Minister Sanna Marini's first Secretary of State, Mikko Koskinen (sd), left his job after the interest rate criticism, citing “family reasons”, and is now being trafficked to the post of Director General of the Ministry of Education for the Department of High School Education.

The Minister of Science and Culture Annika Saarikko also replaced her Secretary of State in the autumn.

Jari Partanen (center) was given the door, and Saarikko replaced Anna-Mari Vimpar (center) as Secretary General of the Parliamentary Group.

The government recently train Partasen to represent Finland at the European Bank for Reconstruction and Development (EBRD) in London from next autumn.

The benefits in the job are good, and the amount of work is reportedly not overwhelming.

It is known that the annual salary of a board member is about 200,000 euros, and it is practically not taxed at all.

In addition to Tiilikainen, MPs Tuomo Puumala (center) and Pilvi Torsti (sd) dropped out of parliament in the last elections.

Both are applying for other positions.

According to IS, an attempt will be made to plant Puumala in the position of Director General of the Department of Youth and Sports Policy of the Ministry of Education and Culture when the current holder of the place, Esko Ranto (sd), retires.

Thursday is unlikely to become CEO, as according to IS, the place is going to the Left Alliance, ie Minna Kelhä (left), Secretary of State for Education, Li Andersson (left) and Jussi Saramo (left).

The task is easy: the Minister of Education decides who will take the place.

But no doubt there is still a place for Torst too.

The mass exodus of state secretaries can also be mirrored in the internal situation of the government, as ministerial recalls are promised at least in the center, the SDP and the Left Alliance.

In the Left Alliance, the situation is clear.

Oulu-based MP Hanna Sarkkinen (left) will take over the position of Minister of Social Affairs and Health from Aino-Kaisa Pekonen (left) in June, as agreed.

The dates of the ministerial recruitment of other governing parties are speculated, but one possibility is that everyone will recycle their ministers at the same time as the Left Alliance.

In the city center, Minister of Finance Matti Vanhanen would be ready to leave his place even immediately, as the new detached house in Nurmijärvi is ready and the summer holiday is reportedly attractive.

Annika Saarikko will probably take the place, although there are other speculations.

With it, Saarikko's position as Minister of Science and Culture will become vacant and possibly also Minister of Agriculture Jari Leppä (center) will have to recycle.

MP from Juha Pylvä (center) has been seated in the place of the Minister of Agriculture, and Antti Kurvinen, the chairman of the center's parliamentary group, is also being promoted to the government.

Unless the government falls into the frame of the weekend.

The most rumors are related to the possible ministerial recycling of the SDP.

Ex-chairman Antti Rinteen is said to be longing for the government and for the position of chairman of the constitutional committee as labor minister.

Miapetra Kumpula-Natria (sd), Member of the European Parliament, has also been spoken about in the ministerial round.

The wildest demaric rumors say that even the replacement of the Minister of Family and Basic Services Krista Kiuru (sd) is being considered, as at least there is a message from the parliamentary group that Kiuru has become a burden on the party.