Vaccini, Figliuolo: "Each region will have a daily target of vaccinations to respect"

"The respect by the Regions of the daily targets is essential for the progressive approach to the goal of 500 thousand administrations per day indicated in the vaccination plan", explains a note from the Extraordinary Commissioner for the Covid emergency 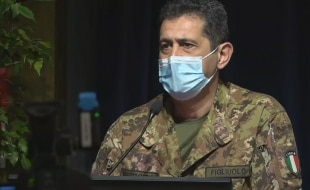 April 20, 2021 "The current Anticovid vaccination plan assigns each Region / Autonomous Province a daily dose target to be respected within a week. These values ​​are confirmed to the regional representatives ten days before the start of the week". This was explained in a note by the Extraordinary Commissioner for the Covid emergency, General Francesco Paolo Figliuolo.

"Compliance by the Regions with the daily targets is essential for the progressive approach to the goal of 500 thousand administrations per day indicated in the vaccination plan, expected to be reached in the last week of April, without any continuity in the activity The target values ​​- the note clarifies - are specific for each Region, with a view to a progressive increase in the number of citizens to whom the vaccines are administered, and are defined on the basis of a graduality that will allow the desired objectives to be achieved, relating the capacity of administration to the availability of doses ".

"With reference to this last aspect, it should be noted that - continues the note - the dose distribution criterion has been revised on the basis of the '' one head, one vaccine '' principle, starting from a proposal of the Commissioner Structure, shared by the Conference of Regions and Autonomous Provinces, the content of which became enforceable between April 15 and 18. The general calculation of the doses currently attributed to the various Regions / Autonomous Provinces from the beginning of the vaccination campaign can be traced back to the new principle adopted , through a gradual recovery plan ".