Football, the protests of the English fans are shaking the Super League. Emergency meeting

According to British media, Chelsea, Manchester City, Arsenal and Manchester United are close to giving up 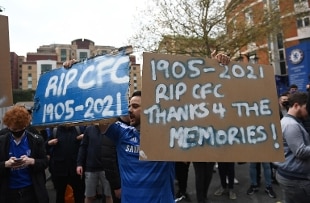 A little more than 48 hours after the press release announcing its birth, it is already losing its pieces.

Manchester City have formalized his exit from the Super League, while Chelsea are preparing to do so.

The BBC confirms this tonight, citing sources from the two English companies.

The project thus loses two pieces out of 12, heavily affected by the protest unleashed in the United Kingdom by fans, the press and many professionals, a protest strongly supported by the government of Premier Boris Johnson.

And according to rumors, two other English clubs - Arsenal and Manchester United - have decided to take a step back, giving up the Super League. United vice-president Ed Woodward, designated to be vice-president of the future Super League, has announced that he will leave the English club at the end of 2021. Of the six Premier clubs that had initially joined the new constitution, at the moment only Liverpool and Tottenham would not have reversed yet.

For the Spanish press, Atlético Madrid are also about to back down. And even Barcelona is not so sure of being part of it: the membership of the Catalan club is conditioned by the approval of the members, who will be called to express themselves in this regard.

All 12 clubs aiming to create the European football Super League had a 'zoom call' in the evening to look for an 'exit strategy' for the project, given the protests that have arisen from various quarters. This was reported by various British media.