Ari Lahti, the boss of the Finnish Football Association, spoke about the possible, very harsh effects of the Super League on Finland - “Really”

According to the chairman of the Finnish Football Association, Ari Lahti, the super league has already gone further than just a threat. 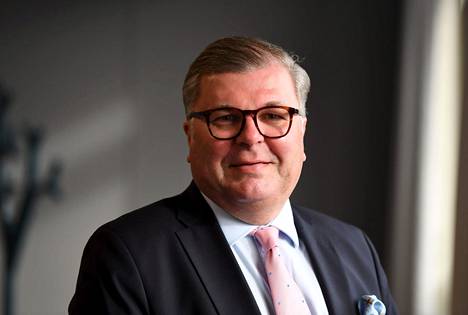 There is a sharp conflict in football that has erupted between the twelve major leagues of the Super League and the European Football Association, Uefa.

The big clubs have announced the creation of a new super league that would virtually destroy the Champions League run by Uefa.

Uefa has threatened the rebels with severe retaliation.

On Tuesday night, Ari Lahti, the chairman of the Finnish Football Association, answered Ilta-Sanomat's questions about the Super League.

Ari Lahti, chairman of the Finnish Football Association, what would the super league mean specifically for Finland?

- The value of European club team competitions would decrease and it would directly affect the income stream of Finnish clubs from Eurocups.

It could also affect the support of the Football Association from Uefa.

- Finnish teams could also lose the opportunity to participate in the most valuable European club team competition.

Is the threat of a new league real or is it just hard talk to get clubs a better deal on the current system?

- Ultimately, this is about money and power.

This is where the hard hard is really injected.

I understand that at least Uefa is ready to look for a solution.

The perspective of the Football Association is, of course, that we hope to find a solution.

- In any case, this is already more than just a threat.

Clearly, legal agreements have already been made here, and dismantling them may be a matter of course.

How has this situation arisen in general?

- Ideas like the Super League have been on the table for years.

I think because of the corona situation, many big clubs have a really big emergency.

There has been an abnormal situation in the market.

The plight has driven clubs into this situation and exacerbated the debate.

Therefore, this is happening now.

Ari Lahti, who attended the Uefa Congress on Tuesday, says that all member states will condemn the super league.

You were at the Uefan Congress on Tuesday and Uefan is scheduled to hold a board meeting on Friday.

How is the matter and what to expect?

- The matter is very clear.

At the end of the congress, it was stated that every effort is being made to prevent the emergence of a super league.

We want football to preserve history and the system to respect every team, even the smaller ones.

- It must be remembered that football as a game cannot be owned by a few private big clubs or their background influencers.

It is more the case that football has to take everyone and its stakeholders into account.

Does Uefa have the power to prevent the emergence of a super league?

- At least there is torque.

However, I understand that Europe has the freedom to do business, so it can be difficult to just deny things.

But it's not easy to play outside the whole system.

Views have been thrown into the air that Uefa should throw rebel clubs right into the yard from the Champions League?

Do you believe in this?

- Pretty harsh rhetoric, but on the other hand I think that if necessary Uefa is also ready for quite harsh means.

No Uefa easily give up.

This is a serious threat to European football as a whole.

Chelsea fans protested spectacularly against the Super League on Tuesday night in London.

Chelsea is one of the 12 clubs that are founding members of the Super League. Photo: Stephen Chung / ZUMA / MVphotos

The president of the Danish Football Association, Jesper Möller, has stated that players from super league clubs would be allowed to terminate their contracts and change teams for free.

Do you think this is the case?

- When concluding the contract, the players have understood that the team will play certain competitions under Uefa and Fifa.

Therefore, I do not necessarily see this as a completely impossible idea.

Möller is a lawyer and well aware of the legal issues involved.

In that sense, this is not a far-fetched idea.

What could happen to Super League players and the European Championships?

- I do not know exactly what measures are being considered now.

Could players really be excluded from the European Championships?

Personally, I see it as having players rights, too, and they haven’t been, I understand, making decisions about the Super League.

In any case, I would consider a possible closure a difficult decision for future European Championships.

- Certainly it could be a means that could be considered at a later stage.