Concerned about the exponential growth of the epidemic, the Ministry of Health says the curfew is lifted or premature

Chinanews, April 19, according to the European Network of Italy citing EUN News Agency, the epidemic analysis data released by the Italian Gimbe Foundation (Gimbe) shows that in the next few weeks, new confirmed cases and the problems faced by medical institutions The pressure will be reduced, but with the restoration of the yellow epidemic monitoring area, the warming of the weather and the inc 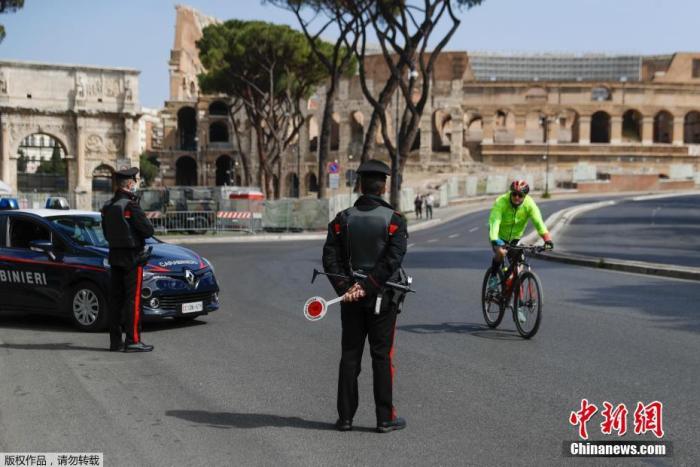 Chinanews, April 19, according to the European Network of Italy citing EUN News Agency, the epidemic analysis data released by the Italian Gimbe Foundation (Gimbe) shows that in the next few weeks, new confirmed cases and the problems faced by medical institutions The pressure will be reduced, but with the restoration of the yellow epidemic monitoring area, the warming of the weather and the increase in social activities that do not comply with the epidemic prevention rules, it will inevitably lead to an increase in the infection curve and an increase in the number of infected people.

On April 3, local time, in Rome, Italy, police patrolled the block near the Colosseum.

According to reports, the Italian Ministry of Civil Defense reported 12,694 new confirmed cases and 251 deaths on the 18th.

Catabellota, chairman of the Jinbei Foundation, said that after mid-May, the epidemic infection index is expected to increase again.

He believes that reopening is a "blade edge" political decision.

In order to spend a peaceful summer, the Italian people must show the greatest degree of cooperation in epidemic prevention.

Reza, head of the Italian Ministry of Health's Epidemic Prevention Bureau, warned that it is still too early to lift the curfew, and the relaxation of the new crown epidemic may mean the restart of a new round of pandemic.

He acknowledged that there are risks in reopening the market, but the government has an early warning system that can immediately initiate epidemic intervention.

Italy's Deputy Minister of Health Sileri said that the data currently recorded are not enough to lift restrictions.

As the national vaccination plan continues, the cycle of opening and closing will not happen again.

He urged the public not to focus on lifting the curfew. When the RT contagion value drops below 0.8, the government will further reduce the epidemic control measures.

The Italian Federation of Commercial Enterprises (Confesercenti) released a market forecast report on the 18th and pointed out that approximately 70,000 stores in Italy may be permanently closed before the end of 2021.

Affected by the new crown epidemic, with the increase in e-commerce and online sales, 35,000 traditional shopping stores are facing the danger of bankruptcy.

Giancarlo Banchieri, chairman of the Turin branch of the Italian Federation of Public and Tour Operators, said that the situation cannot continue as it is now, and the low tide of social and economic activities has "reached the limit."

The government must resume discussions with industry associations to find sustainable solutions to restart the economy.

The authorities expect more information about the reopening, especially about the opening of commercial centers in the old city.

Recently, in Rome, Italy, in response to the continuous surge in patients with new coronary pneumonia, Italy opened a special railway medical train to transport patients from all over the country when the hospital is overcrowded.

[Vaccination plan accelerates the administration of more than 15 million doses]

Italian Health Minister Roberto Speranza announced to the media on the 18th that the country's vaccination plan is accelerating. At this stage, the health system must maintain a cautious attitude towards epidemic prevention.

General Figglioro, director of the Italian National New Coronavirus Emergency Committee, said that as of 15:20 pm on the 18th, a total of 15099777 doses of the new coronavirus vaccine were administered across the country, and all regions received 87.2% of the injected vaccine dose.

400,000 Moderna vaccines have arrived in Rome on the 17th, and the health system will complete the distribution to various regions as soon as possible.

The Italian Medicines Agency (AIFA) released the third report on the adverse reaction of the new coronavirus vaccine on the 18th.

The report collects and analyzes data involving three types of Pfizer, AstraZeneca and Moderna used in vaccination activities in Italy from December 27, 2020 to March 26, 2021. vaccine.

[What does the vaccine adverse reaction report say?

Pfizer has 535 reports of adverse reactions per 100,000 doses, Modena vaccine has 227 reports, and AstraZeneca vaccine has 477 reports.

Three adverse reactions of the three vaccines vaccinated in Italy have been reported. The most common adverse reactions are fever, pain at the injection site, fatigue and chills, muscle and joint pain, headache and paresthesia, nausea and diarrhea.

Among the vaccine adverse reaction reports, women have twice as many adverse reports as men.

Older people over 60 years of age have a lower response to vaccine side effects.

The adverse reactions of Pfizer and Modena were high fever, severe headache, muscle and joint pain and weakness.

So far, in all the vaccine adverse reaction reports, a total of 102 deaths have been reported, and the relevant departments are further investigating the causes.

These deaths reported an average of 1.1 cases per 100,000 doses of vaccinated persons, and the average age of the deceased was 81.4 years.

There are no reports of deaths due to anaphylactic shock or allergic reactions, but there are cardiovascular patients with a history of pre-existing diseases.

One of the most serious side effects of the AstraZeneca vaccine is atypical thrombosis.

Among the 34 million injections in Europe, there were 222 cases, and there were 11 fatal cases in Italy.

At present, the European Medicines Agency EMA has confirmed the relationship between AstraZeneca vaccine and atypical thrombosis, and the incidence frequency is estimated to be about one in 100,000.