The World Health Organization (WHO) and the African Union (AU) each have their own strategy, but some countries do not wait for them to source directly from manufacturers. 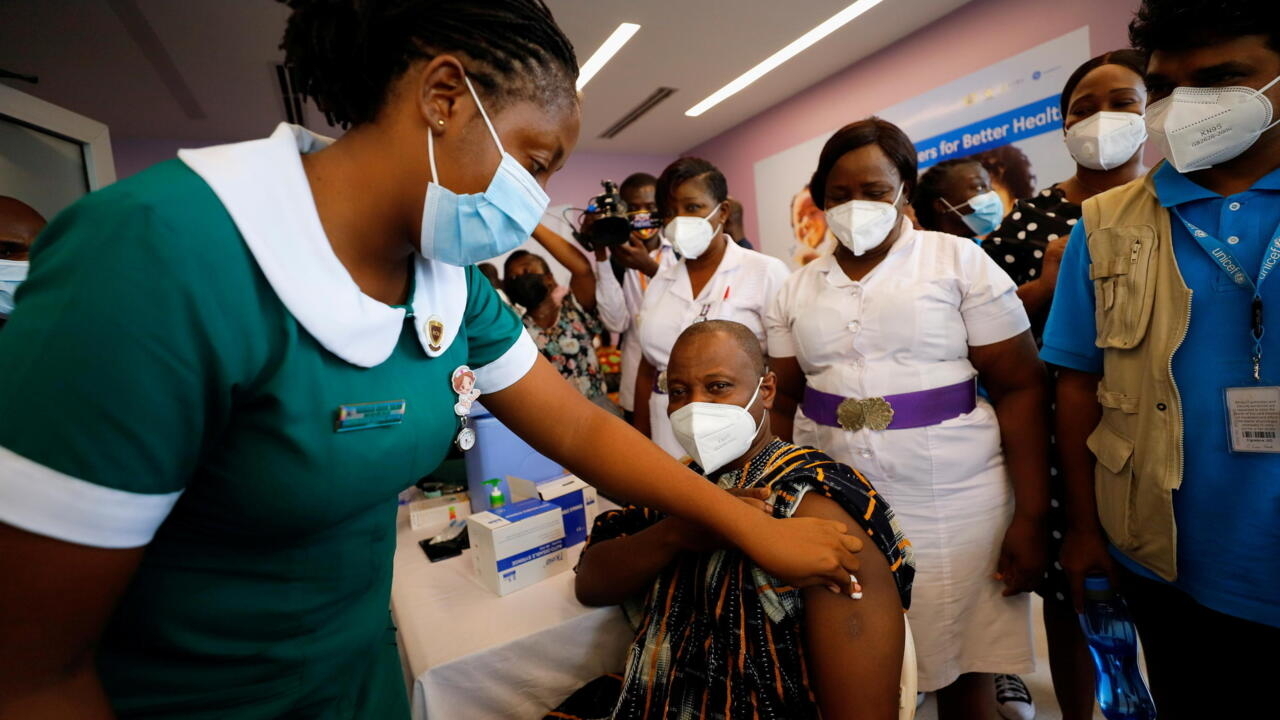 Launch of a national anti-Covid vaccination campaign in Ghana.

The Director General of the Ghana Health Service, Doctor Patrick Kuma-Aboagye leads by example by being vaccinated against Covid-19 in Accra on March 2.

The World Health Organization (WHO) and the African Union (AU) each have their own strategies, but some countries do not wait for them to source directly from manufacturers, receive donations or produce locally under foreign patents.

Two countries in Africa, Egypt and Nigeria, have decided to fund research to find their own vaccine against the coronavirus.

of its Covi-Vax, with the stated ambition to produce on site to serve the domestic market, but also to export to Africa.

In Nigeria, teams of scientists are still looking, thanks to the 25 million dollars invested by the state in January.

Morocco, for its part, has not launched national research, but takes pride in the work carried out in California by the American-Moroccan immunologist Lbachir Ben Mohamed around a universal vaccine that would treat all forms of Covid-19.

” is in the pre-clinical trials on animals.

The Moroccan bet is rather to produce locally foreign vaccines, and in particular the Chinese vaccine Sinopharm, to distribute it to its population and export it to Africa. Egypt, too, has started negotiations with the Chinese group Sinovac, and Senegal says it wants to do the same. In South Africa, the American laboratory Johnson & Johnson (J&J) concluded on November 2, 2020 an agreement with the South African group Aspen to produce and distribute its vaccine on the continent. The capacity of the Aspen plant in Port Elizabeth is 300 million doses per year.

It remains to be seen what this

will become, given the "pause" decided on April 14 by the American and South African authorities in their vaccination program with the J&J doses. A

controversy has indeed erupted around the vaccine

in the United States, after nine vaccinated women suffered from blood clots, one of which died, out of a total of 7 million doses injected in this country. Of the 290,000 health workers vaccinated in South Africa with J&J, none showed such symptoms, reports the South African Minister of Health.

In the meantime, South Africa and India are asking the World Trade Organization (WTO) to relax the rules on intellectual property in order to have

, as in the past for antiretrovirals against AIDS. The objective: to manufacture them at a lower cost in the form of generics, to make them accessible to the most disadvantaged. For the moment, the rich countries (United States, European Union, Australia and Norway) refuse to do so, to protect the stranglehold of their pharmaceutical industries on a huge market. Africa alone represents a demand estimated at between 5.8 and 8.2 billion euros by the African Union (AU).

A strong signal, the AU organized a two-day summit on April 12 and 13 to organize vaccine production in Africa, in the presence of Heads of State Cyril Ramaphosa, Paul Kagamé and Félix Tshisekedi.

The goal is to produce locally by 2040 60% of all the vaccines the continent needs (Covid and other diseases).

Agreements have been signed with the Coalition for Innovations in Epidemic Preparedness (Cepi), the pan-African bank Afreximbank and the Africa Finance Corporation.

WHO's Covax campaign got off to a bad start

The road will be long.

Africa, 14% of the world's population, currently produces only 0.1% of so-called “routine” vaccines, and on April 8 only represented 2% of the 690 million doses of vaccines against the Covid already administered worldwide, according to the WHO.

Apart from the states most affected by the pandemic (South Africa, 53,663 dead on April 17, Egypt, 12,653 dead, Morocco, 8,934 dead), which are also industrialized, the majority of the countries of the continent, with low incomes or intermediaries, rely for lack of alternative means on two initiatives, one international, the other continental.

was launched by WHO with the Vaccine Alliance (Gavi) and Cepi to cover the needs of 92 poor countries around the world and to immunize 20% of their population by the end of the year. It began in February with an order for 90 million doses for Africa of the British vaccine AstraZeneca, produced in huge quantities by India under the name “Covishield”. This brand was chosen for its price and the fact that it can be stored at refrigerator temperatures (2 to 8 degrees Celsius), and not freezer temperatures as for Moderna and Pfizer. Only 16 million doses have been received by 31 countries in Africa since February (including 4 million by Nigeria, 900,000 by Algeria, 854,000 by Egypt, 300,000 by Morocco), allowing Ghana, Rwanda and in Mali, among others, to launch their campaigns.

But India, which produces the British vaccine on a large scale, suspended its exports on March 18 due to the outbreak of the pandemic within its borders.

The Serum Institute of India (SII) mentions a possible recovery in exports in June.

We are at an impasse as a continent,

" Dr John Nkengasong, director of the AU Center for Disease Control and Prevention (CDC), could only observe on April 15.

And this, especially since the doubts about the cases of thrombosis linked to the AstraZeneca vaccine arouse mistrust.

In Mali, of the 21,000 health workers called for vaccination,

fewer than 700 responded to the call at the

For its part, the AU will order 672 million doses to cover 38% of the African population by the end of 2022, as part of its African Vaccine Acquisition Task Team (AVATT) initiative.

In total, it will take more than double.

Already, 400 million doses will come from J&J, whose first deliveries (220 million doses) are scheduled for September, and the rest in 2022 - if all goes well, given the current suspensions in the United States. and South Africa.

The picture would not be complete without mentioning the beggar-thy-neighbor strategy, with agreements made by countries directly with manufacturers of their choice. Do price and quick availability considerations care about diplomacy? Choices are also made without falling into dependence on a single supplier. Egypt, for example, bought 350,000 doses of Sinopharm (at $ 30 per dose), to vaccinate its health workers in January, then 50,000 doses of AstraZneca. Authorities then registered Russia's Sputnik V vaccine on February 24 for "urgent use", without giving details. However, according to

, 25 million doses of the Russian vaccine were ordered by Egypt (at 10 dollars per dose, two doses being necessary for immunization), against 500,000 by Algeria and as many by Tunisia.

South Africa is going from setbacks to setbacks.

She sold on March 21 to the AU 1 million doses of AstraZeneca, after discovering the impotence of the vaccine against the South African variant of Covid-19.

In doing so, the authorities complained that they had paid $ 5.24 per dose, two and a half times more than Europe, for failing to fund research for the vaccine.

Vaccination, however, began on February 18 in South Africa, after receiving 80,000 initial doses of the J&J vaccine, effective with a single injection, on an order of 9 million doses (at $ 10 per dose).

Despite the break decided on April 14 on this vaccine, South Africa claims to be able to meet its objectives by once again changing its tune, with 30 million doses of the Pfizer vaccine, four times more expensive (from 19, 50 to 23 dollars per dose in recent days, for an effective vaccination with two doses).

Elsewhere, it is also the Russian and Chinese strategy, which seems to have to pay, with large donations.

Foreign Minister Wang Yi said at the end of February that China provides free vaccines to 53 countries, and sells vaccines to 22 countries - which are sometimes the same.

Russia is not left out, as it pledged in February a donation of 300 million doses to the AU, which will begin delivery next month.

The Russian mining company Alrosa for its part announced its intention to buy large quantities of Sputnik V to donate it to Angola and Zimbabwe, where it is established.

So many gestures that pawn the pawn of the West, entangled in its Covax initiative.