EU: "Navalny be released immediately". Washington in Moscow: consequences if he dies

The Russian dissident is on hunger strike in Pokrov prison, today the appeal of his daughter Dasha: take him to a doctor. His supporters call for street protests on April 21, after Vladimir Putin's speech to the nation 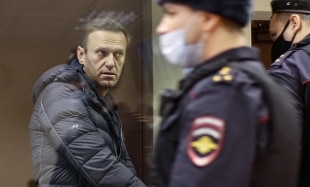 The daughter of the Russian opponent Alexei Navalny has made an appeal on Twitter to have him examined by a doctor.

"Allow a doctor to visit my dad," wrote 20-year-old Dasha Navalnaya, a student at Stanford University in California, worried about the condition of her father who, according to the spokesperson, is dying.

Allow a doctor to see my dad.

His supporters call for street protests on April 21

Navalny supporters have called protests across Russia for next Wednesday, 21, immediately after Vladimir Putin's speech to the nation.

"It's time to act, this is not just about Navalny's freedom, but about his life," Leonid Volkov wrote in a Facebook post.

not be allowed to die in prison

not be allowed to

The ambassador of Russia to the United Kingdom, Andrey Kelin, told the BBC, who assures that Navalny's medical treatment will be taken care of and argues that the real purpose of the requests for medical help from Vladimir Putin's opponent is to "attract the attention".

The case will be examined by the EU Foreign Council tomorrow

The Navalny case will be on the table of the EU foreign ministers tomorrow in Brussels.

This was announced by German minister Heiko Mass to Bild, speaking of the conditions of the Russian opponent.

"The European Union is deeply concerned about reports that the health of the Russian opposition politician Alexei Navalny in prison continues to deteriorate. We ask the Russian authorities to grant him access. immediate to the doctors he trusts. The Russian authorities are responsible for the safety and health of Navalny in prison, which we will ask for an account ". This was stated in a note by Josep Borrell, High Representative of the Union for Foreign Affairs and Security Policy, on behalf of the European Union.

"The EU will continue to ask for his immediate and unconditional release - continues Borrell - because we consider his condemnation motivated by political reasons and contrary to Russia's international human rights obligations. In this regard, we also expect Russia to fulfill. its obligations under the European Convention on Human Rights, including compliance with the interim measure of the European Court of Human Rights regarding the nature and extent of the risk to Mr Navalny's life. "

The European Union had condemned "the poisoning of Navalny with the utmost firmness" and had "imposed sanctions in October last year on six Russian senior officials and a body involved in the assassination attempt".

"The Navalny case - continues Borrell - is not an isolated incident, but confirms a negative model of space reduction for the opposition, civil society and independent voices in the Russian Federation". In this sense, the EU "will continue to ask Russia to urgently investigate the assassination attempt by poisoning Navalny in full transparency and without further delay, and to cooperate fully with the Organization for the Prohibition of Chemical Weapons (OPCW) to ensure an impartial international investigation ".

"We have communicated to the Russian government that what happens in Navalny while the Russian authorities have him in custody is their responsibility, and will be held accountable by the international community." So Joe Biden's National Security Advisor Andrew Sullivan specified that he had communicated to Moscow "that there will be consequences if Navalny dies" in prison. "We are evaluating a different series of measures that we could impose, but I will not communicate them publicly at this time", he added when interviewed by CNN.

Aleksei Navalny is on the verge of a cardiac arrest "at any moment": his health is rapidly deteriorating, warn his doctors asking for immediate access to the dissident, the most famous prisoner of the Russia. Since March 31, President Putin's opponent has been on hunger strike to demand adequate medical treatment for the back pain and numbness of hands and legs that plague him in prison.

The situation of the Russian opponent Alexiei Navalny is "totally unfair": the president of the United States of America, Joe Biden, told reporters in response to a question about the worsening conditions of Navalny in prison.

Navalny, 44, was jailed in February and is serving two and a half years on old embezzlement charges in a penal colony in the city of Pokrov, some 100 kilometers east of Moscow.

Navalny's personal doctor, Anastasia Vasilyeva, and three other doctors, including cardiologist Yaroslav Ashikhmin, asked prison officials to grant them immediate access. "Our patient can die at any time," Ashikhmin wrote on Facebook, pointing to the opposition politician's high potassium levels and saying Navalny should be moved to intensive care. "Fatal arrhythmia can develop at any time."

Navalny barely survived a poisoning with the nerve agent Novichok in August, for which he blamed the Kremlin. His doctors say his hunger strike may have exacerbated his condition. Having blood potassium levels above 6.0 mmol (millimole) per liter usually requires immediate treatment. Navalny's are at 7.1, doctors said.

"This means both impaired kidney function and severe heart rhythm problems can happen at any time," Vasilyeva's Twitter account reads. Doctors said he must be examined immediately "taking into account the blood tests and his recent poisoning."

Navalny's spokeswoman Kira Yarmysh, who accompanied him when he collapsed on a plane after the poisoning in August, said the situation was critical again. "Alexei is dying," he says on Facebook. "With his conditions it's a matter of days". The spokesperson added that she felt as if he was "back on that plane, only this time he is landing in slow motion", noting that access to Navalny is limited and few Russians know what happens to him in prison.

About 70 artists, writers and actors, including Nobel Prize winners Svetlana Alexievitch and Salman Rushdie, have issued an appeal to Vladimir Putin for urgent medical treatment to the opponent Alexei Navalny who is on a hunger strike in prison. The opponent's state of health "is deteriorating rapidly and needs urgent medical attention", reads the document published on the Le Monde website. "We appeal to you, Mr. President, so that Navalny will immediately receive adequate medical attention and the urgent care he needs and to which he is entitled like all Russian citizens". Among the signatories also JM Coetzee, Jude Law, Vanessa Redgrave, JK Rowling, Arundhati Roy.

Navalny's team previously announced plans to stage what they said would be "the biggest protest in modern Russia". Navalny's allies said they would set a date for the protest once 500,000 supporters registered on a website. As of Saturday, more than 440,000 people had signed up. Yarmysh on Saturday urged more Russians to sign up, saying a large rally could help save Navalny's life. "Putin only reacts to mass protests," he added.

Earlier in the week, Navalny's wife Yulia, who visited him in the penal colony, said that her husband now weighs 76 kilograms: he has lost 9 kilograms since the start of the hunger strike.