"Hope when a wedding is held in the ruins"

A bouquet of red plastic flowers shines among the gray masses. We walk in the dust through Mosul's shattered old quarters when my eyes are drawn to a clique of crackling color. Until recently, Old Mosul was a ghost town. 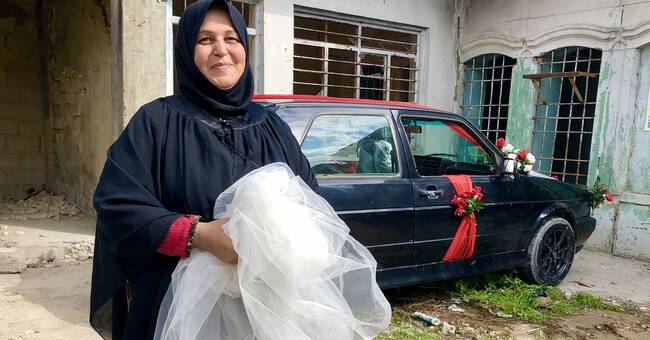 Here, the terrorist sect used the Islamic State's civilian population as human shields when fighting for its self-proclaimed caliphate.

Here, Nada Sultan and her neighbors found dead bodies and explosives in the gravel piles when they returned after the terrorists were chased out.

Now Nada attaches the red plastic flowers to the hood of a freshly washed car, and wraps meters of purple tulle around the chassis.

Her smile lights up.

It's the first wedding to be held in the neighborhood after the terrorists rule, and it's Nada's nephew who's getting married.

The IS caliphate was proclaimed here

So far, only three families have been able to return to their homes in Nada's neighborhood.

But the noise of reconstruction echoes across Old Mosul, and the district is about to rise.

What the inhabitants saw here one summer morning six years ago resonated all over the world.

Mahmoud Dawood, who runs a small grocery store, says he was met by stubborn men with weapons.

Most were foreigners, and they came in bulletproof cars.

All mobile traffic was disrupted.

One of the men shouted that the "caliph" would lead the sermon.

The "caliph" was the infamous terrorist leader Abu Bakr al-Baghdadi.

It was on June 29, 2014 that al-Baghdadi proclaimed the caliphate of the Islamic State from the pulpit in al-Nuri Mosque here in Old Mosul.

The terrorist network had conquered Raqqa in Syria just six months earlier and for a short time conquered large tracts of land in Syria and Iraq.

For three years, IS ruled Mosul.

When liberation finally came, it came at a high price.

An estimated 10,000 civilians were killed during the nine-month offensive against the Islamic State.

Concerned about a humanitarian crisis, the Iraqi government released leaflets over the city urging the civilian population to stay in their homes during the final battles.

Thousands of people were trapped when the front line was moved.

To deter Iraqi forces and the US-led coalition from bombing densely populated residential areas, the terrorists forced locals into schools and government buildings during the final battles.

I remember the terrified voices when I and photographer Pablo Torres visited the Alghad radio station - Radio Imorgon - during the Mosul offensive.

City residents trapped in IS-occupied areas called the station to report a shortage of food and to ask if they would dare to flee.

"We are surrounded by battles," said one man, while artillery fire was heard in the background.

And the food is completely out of stock, ”explained a woman who whispered so as not to be discovered.

Owning a mobile phone under IS was associated with severe penalties.

The Al-Nuri Mosque with its sloping al-Hadba minaret has been a landmark in Mosul for centuries.

IS blew up the symbol-laden mosque - where the terrorists proclaimed their caliphate - as Iraqi troops approached four years ago.

The bombing itself was a recognition of the terrorists' defeat in Mosul.

Now the al-Nuri mosque will also be rebuilt, at the same time as the historic church buildings nearby that IS destroyed.

Engineer Omer Taqa, who was born in Old Mosul, hopes that more people will be able to move back to their homes when the reconstruction takes off.

There is no doubt that the scars are deep and that the healing process will take time.

But Nada Sultan's smile is contagious.

"We have lived in a ghost town.

To be able to go to a wedding after this is the greatest happiness. ”