"A manifestation of despair": why the Ukrainian ambassador reminded Germany of World War II in the controversy about Kiev's NATO membership

Ukraine's Ambassador to Berlin Andriy Melnyk said that Germany bears historical responsibility to the Ukrainian people because of its participation in World War II and therefore should speed up the admission of Kiev to NATO without any additional conditions. This is not the first reminder of the diplomat about the "moral duty" of the FRG - earlier Melnik made a similar appeal, demanding that Berlin take an active part in the issue of the "return" of Crimea. Such statements are an attempt at blackmail, and they will not help Kiev either return the peninsula or join the North Atlantic Alliance, which does not need such a "headache" at all, analysts say. 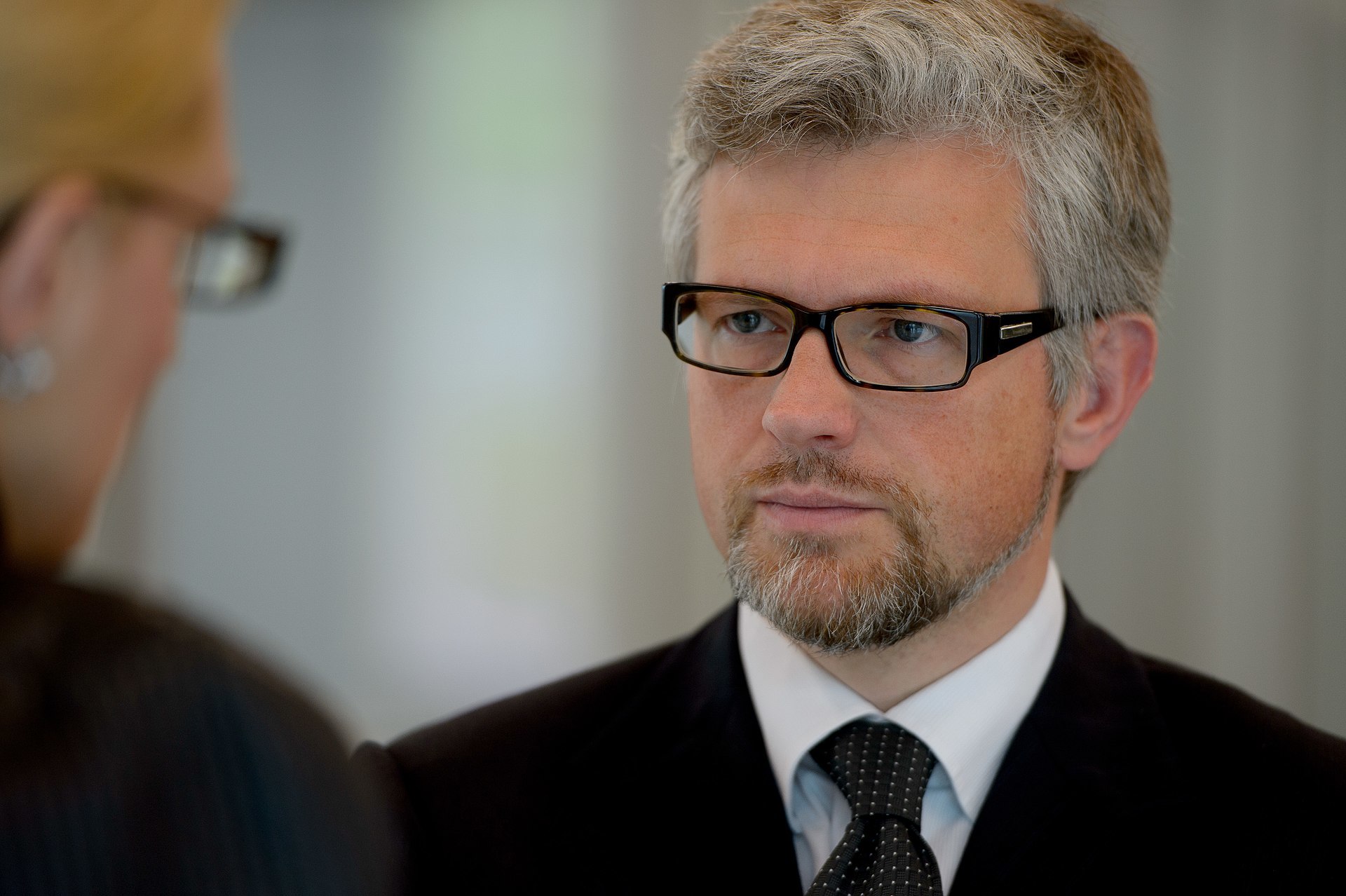 The Ukrainian ambassador to Berlin Andriy Melnyk believes that it is Germany that should achieve the earliest possible admission of Ukraine to NATO without any additional conditions, since it bears historical responsibility to Kiev for its Nazi past.

“It is Germany, which bears special responsibility for the crimes of the Nazis against the Ukrainian people, who should play a leading role in Ukraine's accession to NATO.

And as soon as possible, without "if" and "but", - said the diplomat in an interview with the German edition of Welt am Sonntag.

Only the earliest possible entry of Ukraine into the North Atlantic Alliance can prevent the alleged beginning of a new war in Europe, Melnyk argues.

At the same time, in his opinion, such a step will not become a provocation against Russia, but, on the contrary, “will be a cold shower that will cool all hot heads in the Kremlin,” the Ukrainian ambassador is sure.

According to him, Ukraine's membership in NATO will be "the only guarantee that Moscow will not intervene."

It is worth noting that this is not the first time in recent years that the Ukrainian ambassador has resorted to the theme of Germany's past as an argument in the issue of confronting Russia.

So, in March in an article for the Berliner Zeitung, Melnik said that Germany has a "moral duty" to Ukraine because of the events of World War II and the Nazi occupation, so Berlin should be more actively involved in resolving the issue of "returning" Crimea to Ukraine.

In his article, Melnik complained that the German public did not know about the facts of the occupation of Crimea by German troops during the First and Second World Wars, and about the "tragic" role of the peninsula in the history of German colonialism.

According to him, in the modern FRG "they do not remember for a long time" about the plans of the Third Reich to colonize Crimea, and the "forgotten atrocities" of the Nazi tyranny in Crimea "have not yet been fully considered."

All this, according to the Ukrainian diplomat, should induce Germany and its allies to use political and economic instruments to force Russia to abandon the peninsula.

Melnik's words were commented on by the official representative of the Russian Ministry of Foreign Affairs Maria Zakharova, saying that he did not fully develop his idea, “forgetting” that during the occupation, Crimea was not part of Ukraine and that important historical details are missing from Melnik's argumentation.

“Since the Ukrainian ambassador called for Berlin's“ moral responsibility ”, he should not have left his thought, as always, underdeveloped.

He should have reminded his German friends that Nazi Germany occupied Crimea, which was part of Russia / RSFSR, and if anyone owes it, then Moscow, not Kiev, ”she wrote on Facebook.

Zakharova stressed that if we talk about the moral responsibility of Berlin, then "it would be better to attribute it to support for the anti-constitutional coup in Ukraine, the failure of the Ukrainian leadership to fulfill its obligations under the Minsk agreements, violation of freedom of speech and infringement of the rights of indigenous peoples."

An appeal to Germany's Nazi past is not the only controversial argument that Andriy Melnyk uses to persuade Berlin to speed up Ukraine's NATO membership.

Earlier in his speech on radio Deutschlandfunk, he expressed the opinion that if Kiev does not become part of the North Atlantic Alliance, then his country will have to think about regaining its nuclear status.

“We will either be part of an alliance like NATO and will contribute to the fact that Europe will be stronger and more confident, or we will have to arm ourselves, perhaps even think about nuclear weapons.

How else can we guarantee our safety? "

Recall that Ukraine lost its status as a nuclear power after the collapse of the USSR - in 1990, the Supreme Soviet of the Ukrainian SSR adopted a declaration of sovereignty, which secured the country's nuclear-free status.

The process of Ukraine's surrender of its nuclear weapons began in 1991, and in 1994 the Budapest Memorandum was signed, under which Kiev pledged to transfer all the nuclear arsenals inherited from the USSR to the Russian side.

Moscow believes that the return to Ukraine of the status of a nuclear power will pose a threat to the whole world.

In particular, this was stated by a member of the Federation Council Committee on International Affairs, Senator from Crimea Sergei Tsekov, calling Melnik's statement "extravagant."

“He needs weapons (about the words of Ambassador Melnik. -

) not to defend himself against Russia, but to attack Russia.

The return to Ukraine of the status of a nuclear power threatens the whole world, as anything can be expected from its nationalist authorities, "RIA Novosti quotes the senator.

In turn, a member of the State Duma International Affairs Committee Anton Morozov, in an interview with RT, called Melnik's words "scarecrows from the Kiev regime" addressed to Europe and Russia, and also noted that Kiev no longer has the necessary technical potential to regain its nuclear status.

Kiev switched to statements about a certain moral duty voiced by Melnik, and a demanding tone in political communication with Europe due to the lack of effective results of the course towards Euro-Atlantic integration, Oleg Nemensky, a leading researcher at the Russian Institute for Strategic Studies, explained in a conversation with RT.

“This is a manifestation of despair, since Ukraine's entire political course is aimed at integration with the EU and NATO, which are not interested in this now: the alliance is already present on the territory of Kiev as in its area of ​​responsibility, while not giving it the right to vote in its organization, but The EU got the Ukrainian market, protecting itself from any competition from Ukrainian producers, ”the expert said.

For Ukraine, an unfavorable situation has developed, although the country has driven itself into a dead end - it has no alternatives, space for geopolitical maneuver, Oleg Nemensky believes.

“For this reason, the Kiev authorities are shifting from attempts to reach an agreement to demands doomed to failure in advance.

And since they have no other arguments for blackmail, they resort to moral arguments that are completely inoperative for such questions, ”the political scientist explained.

Oleg Nemensky recalled that in Germany the issue of reparations and any debts for the Second World War is considered resolved and closed, therefore, attempts by the Ukrainian ambassador to appeal to the Nazi past will not be effective.

Melnyk's statements and rhetoric create a "sad impression" of the current level of Ukrainian diplomats, the political scientist added.

“We see failure after failure, even at the level of compliance with the elementary standards of decency of protocol events.

This demonstrates that Kiev's diplomats have the lowest general professional level, as well as the fact that the Soviet school of diplomacy has been completely destroyed, and a new one has not appeared.

Today, most of the modern Ukrainian diplomats give the impression of wild aborigines, not trained in the basic skills of diplomatic communication, "Nemensky said.

In turn, political scientist and economist Alexander Dudchak focused on the fact that it is strange to hear statements about Germany's moral duty because of its past from the ambassador of Ukraine, where Nazi accomplices and war criminals have the status of national heroes.

“Now Ukraine is appealing to fascist Germany, in alliance with which the current Ukrainian heroes fought: first, helping in the fight against the Red Army, and then - conducting punitive operations in the countries of Eastern Europe,” the expert noted.

Such statements addressed to Berlin are a manifestation of "political schizophrenia", and the Kiev authorities will not achieve their goal of speeding up Ukraine's accession to NATO, added Oleksandr Dudchak.

“In Germany, this will only cause irritation, since such statements by high-ranking Ukrainian officials discredit Berlin, which is trying in every possible way to shield and justify the antics of the Kiev regime, even where it should not be done. Ukraine will not be able to join NATO, because the alliance does not want to acquire such a headache. In addition, the members of the bloc understand that the Kiev authorities will fulfill any of their tasks even without joining their ranks, ”the expert concluded.