"In the foreseeable future": Putin and Biden discussed the possibility of a personal meeting

Russian President Vladimir Putin and American leader Joe Biden held a telephone conversation, during which they discussed the state of relations between the countries. As reported in the Kremlin, the US President suggested considering the possibility of holding a personal summit meeting. In addition, the parties discussed issues of arms control, the Iranian nuclear program and the situation in Afghanistan. 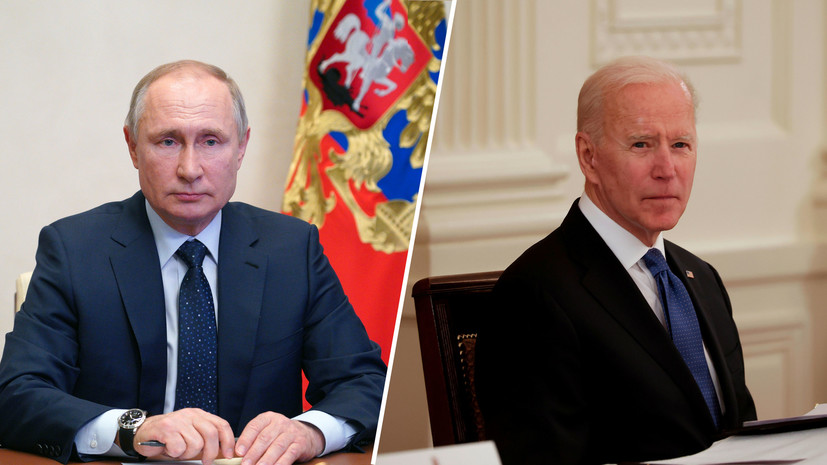 Russian President Vladimir Putin held a telephone conversation with American leader Joe Biden, during which the heads of state discussed the current state of relations between the countries, as well as the possibility of holding a personal meeting.

The conversation took place on the initiative of the American side, the press service said.

“Both sides expressed their readiness to continue the dialogue on the most important areas of ensuring global security, which would meet the interests of not only Russia and the United States, but the entire world community,” the statement says.

During the talks, Biden expressed interest in the normalization of bilateral relations, as well as in stable interaction on a number of acute problems, such as ensuring strategic stability, arms control, the Iranian nuclear program, and the situation in Afghanistan.

"In this context, the US President proposed to consider the possibility of holding a personal summit meeting in the foreseeable future," the Kremlin said.

In addition, Biden confirmed his earlier invitation to Putin to participate in the climate summit, which will take place on April 22-23 via videoconference.

During an exchange of views on the internal Ukrainian crisis, Vladimir Putin outlined approaches to a political settlement based on the Minsk package of measures.

The previous telephone conversation between the leaders took place on January 26.

Then Vladimir Putin congratulated Biden on the beginning of his work as President of the United States.

In addition, the parties discussed the exchange of diplomatic notes on the extension of START-3, the possibility of cooperation in the fight against the pandemic, international relations and other issues.

Aggravation of relations between Russia and the United States

As a reminder, on March 17, Russian Ambassador to the United States Anatoly Antonov was summoned to Moscow for consultations to determine "ways of straightening out Russian-American ties that are in a difficult state."

This decision was made after Joe Biden, in an interview with ABC News, answered affirmatively to a journalist's question whether he considers Vladimir Putin a "killer."

The head of the White House also said that the Russian leader will "pay" for the alleged "influence campaign" on the 2020 US presidential elections, but did not specify what exactly he intends to do.

The official representative of the Russian Foreign Ministry, Maria Zakharova, then noted that Moscow is interested in "straightening out" relations between the countries, which, in fact, have reached a dead end due to the fault of Washington.

Presidential press secretary Dmitry Peskov drew attention to the fact that the statement of the American leader testifies to his unwillingness to improve relations with Russia.

A Kremlin spokesman described the current bilateral relations as "very bad" and reminded that the question of how to improve them should not be asked of Moscow.

Vladimir Putin himself, commenting on the words of his American colleague, wished him good health and drew attention to the fact that many people tend to transfer their own qualities to others.

Speaking about relations between Moscow and Washington, the head of state stressed that Russia will develop relations with the United States, but in those areas in which it is interested in itself, and on those conditions that it considers beneficial.

In addition, Putin invited Biden to hold live talks in an open discussion, noting that it would be interesting for the peoples of Russia and the United States, as well as for many other countries.

“In order not to dive like this in absentia ... We must continue our relationship.

And what's more, now I was thinking about this.

Last time, the initiative for the telephone conversation came from President Biden.

I would like to invite President Biden to continue our discussions, but on condition that we do this actually live, as they say, online.

But without any delay, but right in an open, direct discussion, ”Putin said.

The White House then referred to the excessive workload of the American president, while Biden himself said that "at some point" he would talk with Putin, but did not indicate specific dates.

It is worth noting that Anatoly Antonov said on March 20 that the diplomatic mission received many letters from ordinary Americans who "expressed disagreement and apologized for Washington's rash statements" to Moscow.