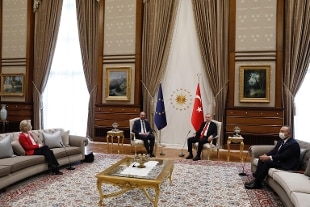 This was communicated by a source of the European Commission who specified how President von der Leyen made it clear that she will never allow such a situation to occur again.

During the meeting, the two leaders discussed a number of topical issues.

The participation of both in the Conference of Presidents in the European Parliament is scheduled for tomorrow, April 13th.

Meanwhile, the local Turkish press returned with various contributions on the 'sofagate' incident.

For the Turkish press, the turmoil during the visit of eminent EU politicians to Turkey is due to the bad relations between the head of the European Parliament Charles Michel and that of the European Commission Von der Leyen.