First, Turkey’s Erdogan gave its support to Ukraine’s Zelensky, then Russia announced it would suspend tourist flights to Turkey. However, the two issues have nothing to do with each other, Putin's press secretary said. 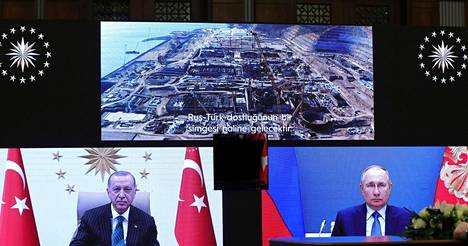 Russia will suspend much of its normal passenger traffic to Turkey.

The suspension will begin on April 15 and continue with this prospect until June 1.

Russian Deputy Prime Minister Tatiana Golikova confirmed on Monday night that air traffic will be cut for a minimum of one and a half months.

Prior to that, the Russian consumer protection authority Rosptrebnadzor said that the coronavirus situation in Turkey had become worrying in a short time.

- In Turkey, the morbidity has almost quadrupled in a very short time in the very last few weeks, said Anna Popova, director of Rospotrebnadzor.

According to Popova, there are fears that the Russians will return to Russia, for example, British and South African virus variants, the number of which has been reported to be very low in Russia so far compared to other countries.

The Russian tour operators' association Ator says that due to the suspension of flights, more than half a million Russians will have to cancel their trip to Turkey planned for the spring.

According to Ator, at least just over 533,000 Russians had already booked a trip to Turkey for the period between mid-April and the end of May.

During the restriction period, Russia intends to allow only return flights of Russian tourists to their homeland and the flight of Russians building a nuclear power plant to their workplace in Turkey.

Among other things, two weekly flights on the Moscow-Istanbul route are permitted for this purpose.

Russian President Vladimir Putin and Turkish leader Recep Tayyip Erdogan attended a ceremony just over a month ago with a video ceremony launching the construction of the third reactor at the Akkuyu nuclear power plant in Turkey. Photo: Handout / Reuters

Russian media drew attention to the fact that Moscow woke up to the coronary virus situation in Turkey immediately after Ukrainian President Volodymyr Zelenskyi had visited Istanbul as a guest of Turkish President Recep Tayyip Erdogan.

According to the Kiev presidential administration, Erdogan promised Zelensky support, among other things, to promote Ukraine's application for NATO membership and to improve the living conditions of Tatars who had fled the Crimea.

Zelensky and Ukraine's Defense Minister Andrii Taran, who was on the trip, are also said to have discussed defense cooperation with Turkey.

Ukraine and Turkey are planning to jointly build corvette-type vessels for the use of the Ukrainian navy, and Ukraine also plans to acquire unmanned Bayraktar fighter jets and their armaments from Turkey.

Erdogan further stated that Turkey supports Ukraine's territorial integrity and does not intend to recognize the annexation of Crimea to Russia.

He also called on Russia and Ukraine to seek a peaceful solution to the dispute in the Donbass region.

He urged “all responsible countries” that they should not encourage “a warlike Ukraine”.

- We strongly recommend all responsible countries, of which Turkey is one, to analyze the situation and the constant military statements of the Kiev administration.

We warn them that they should not feed these (Kiev) militaristic moods, Lavrov told news agency Tassi.

Russian media asked President Vladimir Putin's press secretary if the meeting between Zelensky and Erdogan had anything to do with Russia's decision to suspend Russian tourist flights to Turkey.

It is linked to a worrying epidemiological situation, Peskov said, according to news agency Ria Novost.