Comment: "Nuclear-victim" Japan should not let nuclear "radiate" the world

Chinanews, April 13th, a comprehensive report, despite the strong opposition from many parties, the Japanese government held a relevant cabinet meeting on the morning of April 13 and determined to discharge the Fukushima Daiichi nuclear power plant into the ocean, which contains nuclear sewage that is harmful to the marine environment. Although this move will solve the Fukushima nuclear sewage p 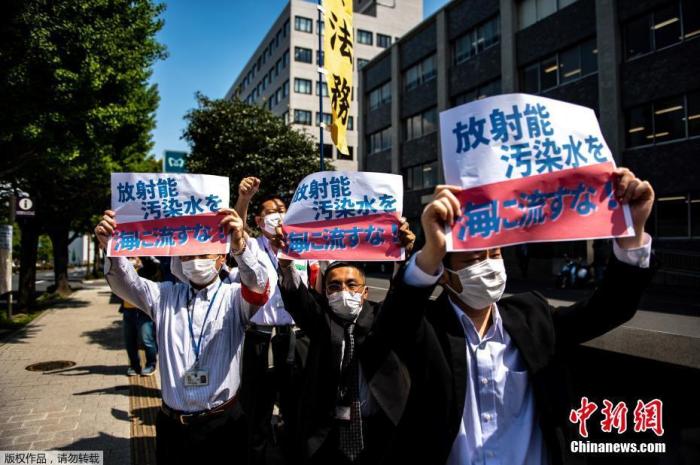 Chinanews, April 13th, a comprehensive report, despite the strong opposition from many parties, the Japanese government held a relevant cabinet meeting on the morning of April 13 and determined to discharge the Fukushima Daiichi nuclear power plant into the ocean, which contains nuclear sewage that is harmful to the marine environment.

Although this move will solve the Fukushima nuclear sewage problem that has plagued the country for 10 years, it will have a far-reaching and unknown impact on the world.

If it insists on going its own way, Japan will surely suffer the corresponding consequences.

On April 12th, local time, outside the prime minister's office in Tokyo, local people held a rally to protest the Japanese government's plan to discharge purified water from the disaster-stricken Fukushima nuclear power plant into the sea.

Discharging nuclear sewage into the sea is not the only option

In fact, discharging nuclear sewage into the ocean is not the only option for Japan.

It is suggested that nuclear sewage can also be packed into solid tanks made of sand and concrete, or more long-term storage tanks can be built in unmanned areas.

However, regardless of its possible impact, Japan knowingly committed crimes, lost its scientific, political, and diplomatic credibility, and chose the most cost-effective solution.

Among them, the operation of discharge into the ocean is more "convenient and cheap", and other disposal schemes are less considered in terms of economy, technical maturity or time.

Kazuki Suzuki, director of the Climate and Energy Program of Greenpeace Japan Office, pointed out that although Japan has the technology and conditions to build more long-term storage tanks at the location of the Fukushima Daiichi Nuclear Power Plant and the surrounding unmanned areas, the risk of nuclear radiation proliferation will be controlled to a certain extent. In the smallest range, the Japanese government chose the most cost-effective way-dumping nuclear sewage into the Pacific Ocean.

The Fukushima nuclear accident has occurred for more than ten years, but nuclear sewage has accumulated more and more, becoming a "shield" in post-disaster reconstruction work.

The Japanese government has been criticized by the domestic people because of its long delay.

However, the Japanese government should not make reckless decisions based on its own selfishness.

"Nuclear-victimized countries" should not "radiate" nuclear pollution to the world

For a long time, Japan has regarded itself as "the only nuclear-weapon victim in the world."

However, now, Japan, a country that is well aware of the effects of nuclear radiation on human life and health and the natural environment, and how many sequelae it brings, has to "pour down" nuclear sewage and "radiate" it to neighboring countries and even Endanger the public welfare and interests of the international community.

More than 60 years ago, Japan broke out the "Minamata Disease" incident that caused a sensation in the world.

The culprit was that nitrogen (N) production companies, which were in the world's chemical industry with cutting-edge technology, discharged untreated wastewater into the water, causing a large number of Minamata disease patients and causing serious pollution to the marine ecological environment.

This time, the Japanese government claimed that it would discharge the diluted nuclear sewage into the ocean that “complied with the standard”.

But who can guarantee that tragedies similar to the "Minamata disease incident" will not happen again in the future?

Moreover, the "Minamata disease incident" is mainly concentrated in Japan, but the nuclear sewage discharged into the sea may spread to the entire Pacific Ocean, and the impact will be more serious and far-reaching.

As a "responsible power", Japan's transfer of disastrous results from its own negligence to the ocean is extremely irresponsible and extremely short-sighted.

Data map: Fukushima Daiichi nuclear power plant shuts down and lights up in the evening.

Once nuclear sewage is discharged into the sea, it will cause serious pollution to the marine environment, and radioactive materials may spread to the entire Pacific Ocean, and even cause irreversible effects on the global marine environment.

A German marine scientific research institute once calculated and modeled the spread of nuclear sewage in Fukushima, and the results showed that: within 57 days, radiation will spread to most of the Pacific Ocean; in just three years, the United States and Canada will be polluted.

Not only that, the International Greenpeace Organization also pointed out, "These harmful elements and other radioactive nuclear waste will harm the environment for thousands of years, and may cause damage to human DNA."

Among them, Article 195 states that the actions taken by countries when taking measures to prevent, reduce and control pollution of the marine environment should not directly or indirectly transfer damage or danger from one area to another, or transform a type of pollution. Into another kind of pollution.

If the Japanese government discharges nuclear sewage into the ocean, it will constitute a typical marine environmental pollution behavior, which not only violates international morality, but also bears corresponding international legal responsibilities.

At present, the Japanese government is making relevant preparations with the goal of discharging nuclear sewage after two years.

During this period, the Japanese government should uphold a highly responsible attitude towards its own nationals, neighboring countries and the international community, thoroughly assess the possible impact of the nuclear sewage treatment plan, and proactively and promptly disclose information in a strict, accurate, open and transparent manner. , Make cautious decisions based on full consultation with neighboring countries.