Matti Tolvanen, Professor of Criminal and Procedural Law, says that maximum penalties for drug offenses are very rare on an annual basis. 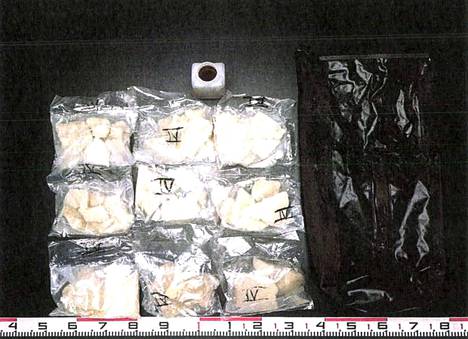 None of the key figures in Finland's largest drug tangle, the Katiska case, received a maximum sentence of 13 years in prison in the Helsinki District Court on Thursday.

The closest came Janne “Nacci” Tranberg, ex-leader of the Cannonball vest, who was imprisoned for a total of 12 years and 11 months.

The cake of Niko Ranta-aho, who confessed some of his crimes and assisted the police, remained for 11 years.

For the first time, Ranta-aho is believed to be released from prison in about 5 years.

According to Statistics Finland, in 2014–2019, 16 drug sentences were imposed for more than 12 years in prison.

Matti Tolvanen, Professor of Criminal and Procedural Law, confirms that the cases are very rare.

- Yes, they are quite unique on an annual basis, but they will.

In the Katiska case, the total number of imprisonment sentences was exceptional, when there were 51 convicts, Tolvanen says.

According to Tolvanen, the district court may impose a maximum penalty on a defendant if he or she has committed more than one serious drug offense and if the quality of the trafficked substance is found to be dangerous.

The sale of heroin, which Ranta-aho and Tranberg did not commit in the light of current knowledge, is considered particularly aggravating.

- They also had a lot of doping substances involved, which will result in significantly milder convictions than the actual drugs.

One of the most recent maximum sentences in Finland was seen just a week before the Katiska convictions, on Thursday 1 April.

A thirty-year-old principal who had been sentenced to 13 years in prison had smuggled and brokered various drugs with her accomplices for 2014–2020 euros.

The verdict was reported by Yle.

The drugs were sold on Silkkitie, Sipulimarket and Dream Market.

In its decision, the court takes into account the man's previous conviction for the same crimes.

Customs launched an investigation into the case at the end of 2020 after seizing a total of € 400,000 worth of drugs carried by the criminal ring.

The substances were largely from the Netherlands.

In July 2019, the Pirkanmaa District Court sentenced Ricardo Eric Valpoort, who organized cocaine smuggling, to 13 years in prison for a total of 18 serious drug offenses.

In 2008, the lawsuit attracted great media attention, with a maximum sentence of 13 years for two Finnish brothers.

The league, led by the brothers and their childhood friend, smuggled well over two thousand kilos of hashish and a dozen kilos of cocaine onto trucks in the Netherlands for years.

The largest cargoes were 500 pounds.

The image in the pre-investigation material of the police Katiska case shows 8.8 kilos of MDMA. Image: Police / Magazine image

According to a preliminary investigation by the Helsinki police, the criminal league led by Ranta-aho and Tranberg smuggled more than 200 kilos of amphetamine, 15 kilos of cocaine, more than 30 kilos of MDMA, 60 kilos of hashish, more than 100,000 ecstasy tablets and more than 20,000 LSD patches, two kilos of crystals to Finland. and about two million drug pills classified as narcotic.

During the preliminary investigation, the police calculated that the league had received more than 10 million euros in criminal proceeds.

According to Professor Tolvanen, the Supreme Court changed drug-related jurisprudence in 2019. Previously, the lengths of the verdict were based more strongly on the quantity and quality of drugs trafficked.

- Now the court must justify for each defendant how important a role he has played in the crime.

In the past, there were a couple of cases where convictions were snapped just for drug trafficking without the convict even necessarily realizing they had acted as part of organized crime.

Although, according to Statistics Finland, convictions for drug offenses increased by as much as 43 per cent between 2010 and 2019, the number of convictions for aggravated acts has remained fairly the same throughout the period under review.