IS visited the all-time lottery venue, the tiny village of Palonurme - Petri's guide to future millionaires

Ilta-Sanomat went to feel the atmosphere in Palonurmi in Kuopio, where it was the biggest hit in the history of lottery. 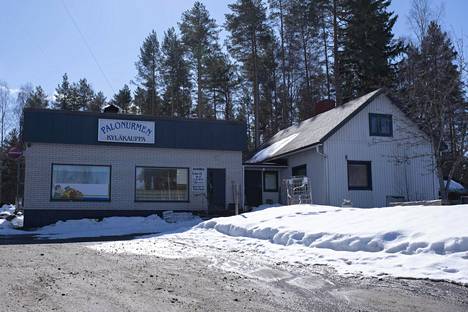 The door of the Palonurmen Village Store stayed closed on Sunday.

This was despite the fact that on Saturday night it had been revealed that the largest lottery pot in our country, EUR 15.7 million, had been sold from that trade.

And when the villagers knew the store was closed on Sundays, curious villagers did not arrive in the village center until rush hour.

The village store in Palonurmi closes its doors in the beginning of the week, so the jackpot came to the village in the last drop. Photo: TIMO HARTIKAINEN

On a sunny spring day, Seppo Vepsäläinen has put on a cycling helmet and set out to enjoy the sunshine.

According to him, the man could not enjoy the lottery.

Yes, this morning people from Helsinki and Hämeenlinna have been asked if you were in a group, the pensioner says.

- After all, that kind of money is big money.

It was the first big victory here in Palonurme, Vepsäläinen knows.

The largest cash in the village

A talkative Savoist believes that knowledge of fresh lottery millionaires will spread in the village over time.

- Soon it will be seen by Mersulla Ajja.

You don’t grab a bike ride, although it stays healthier when you ride this one.

Here was Osuuspankki for an awful long time, it was the last village bank in Nilsiä.

For safety reasons, it was stopped.

Big money has been handled there before, but probably not so big, says Seppo Vepsäläinen, who knows his home village thoroughly.

Petri Rossinen, who is putting up a moped with his son Topias in the yard of a nearby terraced house, is also on the same lines with regard to the cash handling in the commercial property.

Although the bank has been in a village retail property in the past, hardly more than 15 million euros in securities have been placed in the world.

“My colleagues there have communicated and asked if you will still come to work on Monday morning,” says Petri Rossinen.

Next to the boy Topias. Photo: Timo Hartikainen

- Or at least there must have been really good collateral, the man says.

In all probability, all five portions of the lottery win over three million euros have hit the people of their own village.

You can't go anywhere through Palonurmi.

- Calm down here at this time of year.

During the summer, it is busier here when people come to their summer cottages, Petri Rossinen says.

Rossinen's daily life remains the same, even though the lottery hit the village.

The program for the coming week is also known.

- The colleagues there have communicated and asked if you will still come to work on Monday morning.

Unfortunately, I have to go.

And one piece of advice for the village’s new millionaires comes off.

At the waste point standing next to the school and the village shop, Mika Kuosmanen did not manage to buy a note from the village shop that all 7 numbers would have hit.

This time onnetar did not favor the man.Photo: Timo Hartikainen

- Yes, I had to check my lottery ticket in the evening, but there was no profit.

I play the lottery every week with this trade, but it didn’t hit the spot.

Now someone is happy in this village too, Kuosmanen says with satisfaction.

The village shop closes its doors this week, so the jackpot came to the village in the very last drop.

- Yes, the phone has ringed here itself, although there was no profit.

There is a telephone ringing and messages have arrived.

Acquaintances have called and told me that a pot has come to our village.

Fortunately, relatives have not yet asked, Mika Kuosmanen laughs.