CDU: CSU parliamentary group calls for members to be questioned about candidates for chancellor

Who will be the Union's candidate for Chancellor? After the leadership bodies of the CDU have spoken out in favor of Laschet, the CSU parliamentary group pleads for a survey of the members. CSU boss Söder is apparently postponing his decision. 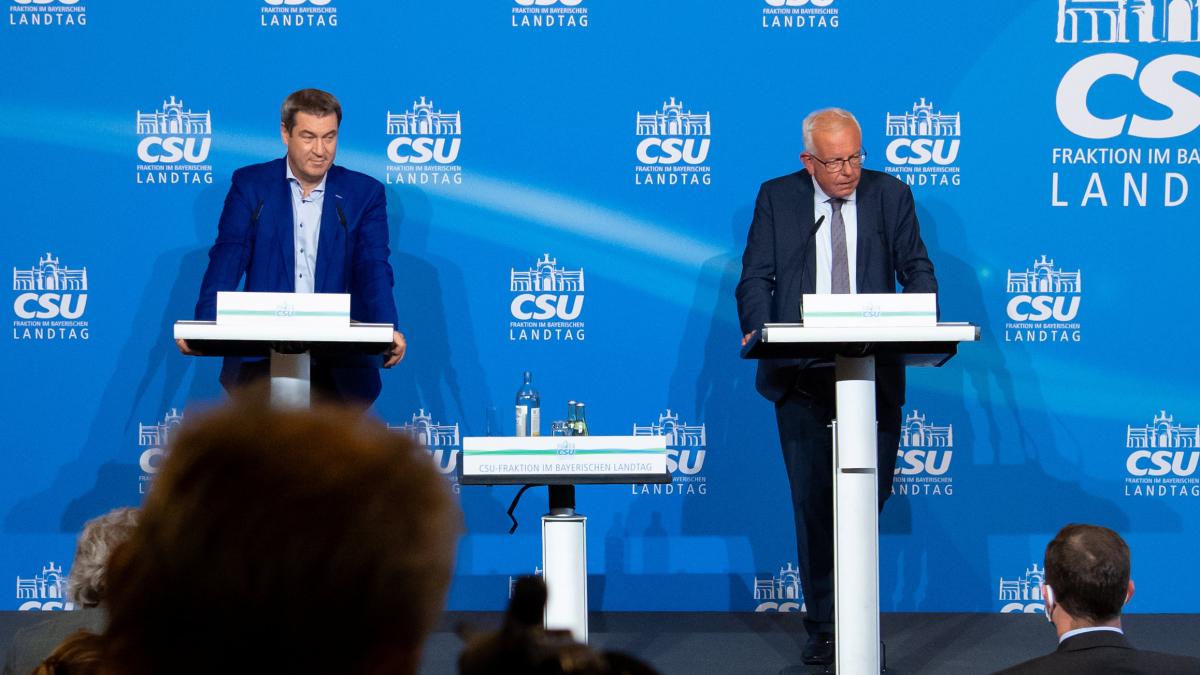 The CSU parliamentary group in the Bavarian state parliament has called for a member survey on the Union's candidacy for chancellor.

He called for such a survey among both the members of the CDU and the CSU, said state parliamentary group leader Thomas Kreuzer on Monday in Munich.

"The decision on the candidate for chancellor is not only crucial for the Union, but for the whole country," said a statement by Kreuzer.

"That is why it must be placed on the broadest possible basis and it is forbidden for this to be decided in close management circles."

"There is broad support for Armin Laschet as a candidate for chancellor from the CDU and CSU," said CDU General Secretary Paul Ziemiak on Monday after deliberations between the Presidium and the Federal Executive Committee.

According to the will of Bavaria's Prime Minister Söder, a decision on the candidacy for chancellor will not be made until the end of the week.

It is not yet the day of the decision, rather one will sit down at the end of the week, said Söder, according to participants in a switch of the CSU presidium.

And he will also ask that not only two people sit down, but that other representatives from both parties are present.

He was against a "hau-jerk procedure".

Söder also emphasized that the candidate for chancellor would have to be supported by a large majority of the members.

Both parties have to be honest about who you have the best chances with.

Söder himself affirmed that he was ready to take on responsibility.

But there will be no quarrel and no resentment if the CDU sees it differently.

The CSU presidium will not take a decision on Monday either, said Söder - but they also want an opinion.

CDU politician Friedrich Merz spoke out in favor of Armin Laschet as candidate for chancellor after the presidium meeting.

Merz told the news portal “T-Online”: “Even Helmut Kohl and Angela Merkel have not been carried to the Chancellery by surveys and popular speeches.

Armin Laschet has clear ideas about the urgently needed modernization process in Germany. ”

Merz said further about Laschet:“ He is the elected chairman of the CDU.

He has my support - as promised at our party congress. "

Söder made his candidacy on Sunday in a joint appearance with Laschet in front of the head of the Union faction dependent on broad support from the CDU.

The Bavarian Prime Minister agreed to otherwise categorize himself and work with Laschet.

As with the election as CDU federal chairman, Laschet does not find the unreserved support of the CDU Mecklenburg-Western Pomerania in the free choice for chancellor candidate.

“For us, the main question is who is most likely to win the Bundestag election.

This is the one who has the greatest support from the electorate.

And according to surveys, this is currently Markus Söder, ”said CDU State Secretary General Wolfgang Waldmüller in Schwerin.

The presidium of the Berlin CDU had previously spoken out in favor of Söder on Monday morning.

"Markus Söder is the hands-on, successful crisis manager who can lead Germany out of the pandemic and make the country fit for the future," said CDU state chairman Kai Wegner.

With Armin Laschet and Söder, the Union has two strong Prime Ministers as chairmen of the CDU and CSU, who both have what it takes to be Federal Chancellor, Wegner said, but also said: “We are convinced that people even more trust Markus Söder to do Germany well to lead."

The Rhineland-Palatinate CDU state parliamentary group chairman Christian Baldauf warned that his party should be united.

“The CDU and CSU can only win a victory if they work together.

We have to stay close together, ”said Baldauf to the German Press Agency in Mainz.

“That is why a quick, amicable solution is so important.

We mustn't run into an argument.

Neither within the CDU nor between the sister parties. "

"I assume that the K-question will be answered very quickly," said Baldauf.

Baldauf did not say whether he considers Laschet or Söder to be the better candidate.

Greens: No influence on your own K question

According to their chairman Robert Habeck, the Greens do not care about disputes between the CDU and CSU over the question of the candidate for chancellor.

"We need a conservative party capable of acting in Germany," said Habeck in Berlin.

“That is why we have no interest in the Union sinking into its own quarrels.” A conservative party that knows who it is is needed for a trend-setting dispute.

"You haven't had that feeling in the last few days."

Habeck said he did not want to make election recommendations or wishes for either Söder or Laschet.

"That is a matter for the Union," he stressed.

"They know that we will take it as it comes." Habeck criticized the "malice" that Laschet as a person had recently faced.

He and his party did not want to adopt this style.

The appointment of Söder or Laschet has no influence on the decision, which the Greens still have to make about their candidate for chancellor, said Habeck.

The federal executive wants to propose either Habeck or co-party leader Annalena Baerbock as the top candidate for the federal election next Monday.

The two want to agree with each other beforehand.

Habeck did not comment on Monday whether the decision had already been made.

The Green Party Congress in mid-June would have to confirm the Executive Board's proposal, which is expected.

The SPD accused the Union of having the unresolved question of the candidacy for chancellor a burden on the political decision-making process.

Party leader Norbert Walter-Borjans spoke of a “intrigue” between the CDU and CSU, in which “people stroked over the table and kicked under the table”.

This is a "heavy burden for politics".

He called on the coalition partner "to quickly bring order to this place".

SPD General Secretary Lars Klingbeil described the focus on the struggle for the candidacy for chancellor in the Union as "selfish".

"During their public scuffles about the candidacy for chancellor, the pandemic fight for Laschet and Söder is completely in the background," said Klingbeil of the "Augsburger Allgemeine".

The behavior would not do justice to Germany in the difficult situation.

"The unworthy theater of 'Union Personnel Policy' must end," said Bartsch to the "Redaktionsnetzwerk Deutschland" (RND).

"The pandemic policy must no longer be the plaything of the power politics of the CDU and CSU." The Union is overripe for the opposition.

"Whoever is running will become opposition leader or remain prime minister."

"The CDU would be well advised to clarify its internal problems quickly and finally to concentrate on combating the corona pandemic," said FDP General Secretary Volker Wissing to the newspapers of the "RND".

Party politics should “not be more important than government action in such a crisis”.