A parliamentary report alerted the growing phenomenon of the "shadow lawyer", warning of its negative impact on the legal skills of national lawyers, and said that there are citizens responsible for law firms who do not know anything about the work of their offices. It revealed that the Ministry of Justice had completed 50% of the draft project. 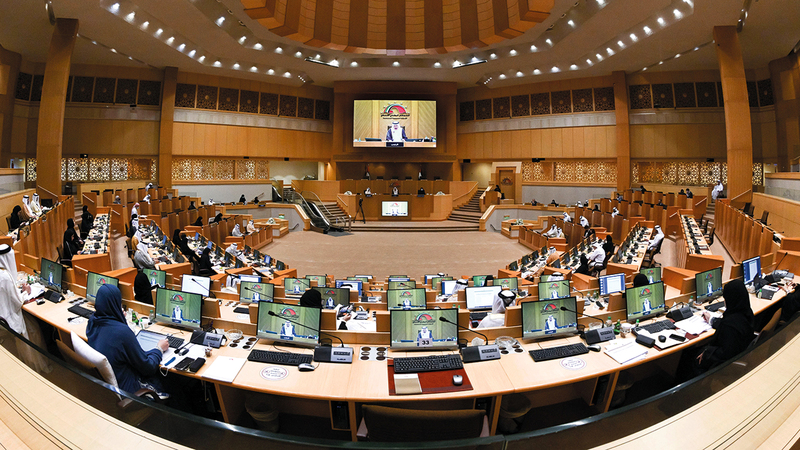 Completion of 50% of the draft of the "new law firm" bill.

The Council called for limiting the overlapping duties of the legal profession and legal consulting firms.

A parliamentary report alerted the growing phenomenon of "shadow lawyer", warning of its negative impact on the legal skills of citizen lawyers.

He said that there are citizens responsible for law firms, who do not know anything about the work of their offices.

He revealed that the Ministry of Justice had completed 50% of the draft of the new federal law in the matter of the legal profession, after discussing it with a group of lawyers and concerned parties, pointing out that "the new law will increase the validity of the lawyer registration card from one year to three years."

He added that the ministry is currently studying the idea of ​​unifying the mechanism for registering lawyers, through a joint committee with local courts, to link it with the identity.

In detail, a report issued by the Federal National Council expressed "deep concern" about what it described as "the growing phenomenon of shadow attorneys in the country", pointing out that "a large number of citizens responsible for law firms do not know anything about cases or legal notes, or everything related to The work of these offices before the judicial authorities ».

The report, which Emirates Today obtained a copy of, attributed the most important reasons for the growth of the phenomenon of "shadow lawyer", to the weak oversight role of the Ministry of Justice in following up on lawyers' offices, "which resulted in the spread of the phenomenon, and the weak awareness-raising role towards the recent graduates of lawyers, Those who accept to be a shadow of non-citizen lawyers, ”warning that“ the continuation of this situation may lead to a weakening of the legal practices and skills of citizen lawyers. ”

He called for setting restrictions and conditions for opening new law firms, the most important of which is that there should be prior legal and administrative experience for new lawyers, as is the case in the Dubai Courts, which require three years of experience with a lawyer to allow the opening of his own office.

He stated that the Ministry of Justice is currently studying the idea of ​​unifying the mechanism for registering lawyers, through a joint committee with local courts, which works on linking the registration with the identity, pointing out that there are obstacles that it is working to solve by communicating with local authorities.

According to the report, the Ministry confirmed that its role is limited to issuing licenses to practice the legal profession, and does not include issuing licenses for legal consulting offices, as the local economic development departments are the responsible party for issuing licenses for them, while legal translation offices are subject to the Ministry’s control, and they have a specific specialization and a law that regulates their work. And fines are issued for it in the event that it violates the regulations for which it was established.

She stated that she had completed 50% of a draft federal law amending the federal law in the matter of the legal profession, after discussing it with a group of lawyers and those concerned with the profession, noting that the new law would raise the validity period of the lawyer registration card from one year to three years, with the aim of facilitating and activating Initiatives related to the continuation of their services, as it will increase the punishment for anyone who attacks a lawyer while performing his work, as it will be equated with the penalty for assaulting a public employee.

She emphasized that she was unable to impose specific settlement rates for lawyers working at the legal advice offices of the free zones, as these offices do not fall under the jurisdiction of the ministry, in addition to that there is no legislative basis for the ministry to monitor and regulate its work.

And it showed its readiness to train and raise the skills of citizen lawyers.

However, it cannot impose this on lawyers.

He called for speeding up the issuance of a new law to regulate the legal profession in a manner that keeps pace with the variables of the judicial work and economic and social developments in the country, and limits the overlap in specializations between law firms and legal advice offices, and allows citizen lawyers to practice some commercial activities, according to the controls set by the Ministry.

He called for cooperation between the Ministry of Justice and the Emirates Association of Lawyers and Jurists in order to activate the committee to protect the legal profession, to adopt initiatives to protect the legal profession from the negative effects of crises and disasters, such as the "Covid-19" pandemic, to develop oversight mechanisms for law firms, and to offer awareness and training programs for new lawyers. To curb the "shadow lawyer" phenomenon.

He stressed the importance of coordination between the ministry and the concerned federal and local authorities to limit the interference of some economic activities with the functions of the legal profession, and the need to communicate with lawyers to inform them of the legal developments in the country.

The Ministry of Justice confirmed that there is currently an electronic link with lawyers ’offices through the" smart justice system ", which allows lawyers to present their papers, noting that it has adopted a number of initiatives that contribute to the development of the legal profession, such as the simulation system for lawyers, the system for registering lawyers and licensing their offices, and the registration service Offices, and all procedures in case management.

She drew attention to the formation of a joint committee with the Emirates Association of Lawyers and Jurists to develop the legal profession. She also addressed the association to provide it with the names of the lawyers registered with it to provide health insurance for them, by negotiating with insurance companies to obtain the best offers, in addition to providing discount cards, such as the “Esaad” card.

• «Justice» is studying the allocation of a unified body for «registration of lawyers» within the state.