Håkan's finds were dismissed as rubbish - was a medieval silver treasure

When Håkan Linder first left the silver needle to the National Heritage Board in the 80s, it was dismissed as rubbish (see the video above). This spring, the state redeems the find and Håkan receives SEK 1,000 in redemption. 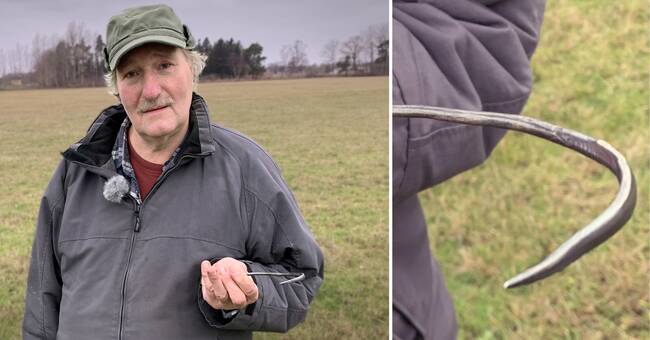 The silver needle from Bunge on Gotland is just one of many finds redeemed in the past year.

During the past year, the Swedish National Heritage Board, RAÄ, has been grazed by a long queue of ancient finds.

For a period, only one person made assessments as to whether a find was valuable and interesting enough to be redeemed.

In the end, there was a real queue of cases.

Now, instead, three people have worked with the investigations.

Anyone who finds something historical must submit it to the county administrative board in the county where the find was made.

The County Administrative Board then turns to RAÄ to find out how the finding is to be handled.

In a normal year, the county administrative boards in Sweden send in between 20 and 30 findings.

About half of these are redeemed after an investigation at RAÄ.

This year, the find from Bunge has been redeemed, as well as a coin from 1537 found in Visby.

Gotland had its own coinage before the mainland had it, and 1537 was the last year when the coins were minted on the island.

The finder of the coin receives SEK 300 from the state.

At Ågelsjön outside Norrköping, a holkyxa was found which is also redeemed.

In this case, the finder receives SEK 1,300 in redemption.

In order for an item to be eligible for redemption, it must be from 1850 or earlier.

The idea is that the compensation should correspond to the market value or more so that valuable objects can stay in Sweden and be shown to the public.