Video: Who will decide the Earth's Clasico? Messi, the "legend" of Barcelona or Benzema, the "government" of Real Madrid?

The Clasico-Earth match between Real Madrid and Barcelona tomorrow, Saturday, will be exciting as usual, and the key to the two teams ’victory lies in the experienced leaders Lionel Messi, the“ legend ”of Barcelona and the“ government ”Karim Benzema, Real Madrid's top scorer. 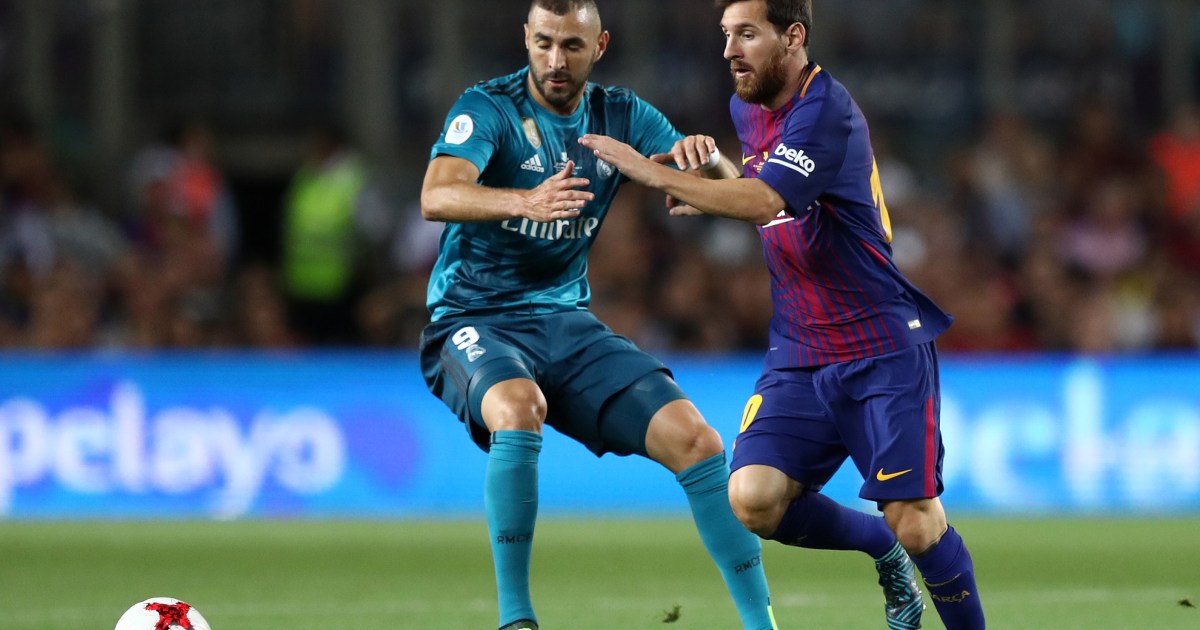 The Clasico-Earth match between Real Madrid and Barcelona tomorrow, Saturday, will be exciting as usual, and the key to the two teams' victory in the match lies in the experienced leaders Lionel Messi, the "legend" of Barcelona and his historic goal, and the "government" Karim Benzema, Real Madrid's top scorer.

The two stars enter the match while they are in their prime, so that the Spanish newspaper "MARCA" indicated that it is not an exaggeration to say that the result of the Clasico on Saturday night will be determined largely by the level of Messi and Benzema.

Messi is a legend of Barcelona

Messi's brilliance in 2021 was the direct reason for Barcelona's return as a competitor for the LaLiga title, after he was so far from the competition, to the point that the team's coach Ronald Koeman announced openly that he was out of it.

Messi did not start the season with his usual brilliance;

As a result of the problems that preceded the season and his request to leave, then his retreat due to Barcelona's adherence to the huge penalty clause, but the beginning of 2021 witnessed the re-discovery of his best levels ever, at the age of 33 years.

The best and most amazing thing you can see about Messi in El Clásico 🐐🔥 # ElClásico # LaLigaSantander pic.twitter.com/NaOMM3xVvt

And Messi began to feel comfortable when Koeman's experiences succeeded in some different ways of playing, and this was evident when he began to smile, and even celebrate madly for the first time in a long time, and this was reflected on his level on the field;

Since January 1, he has scored 16 goals in 13 La Liga matches only.

The legend Messi led Barcelona almost alone to the domestic title race, helped by the decline of leaders Atlético de Madrid and losing many points until he was only one point ahead of Barcelona.

There are many reasons that make Messi eager to score in tomorrow's Clasico, including that the match may contribute to deciding the title of the season, as the winner will be the closest to climbing the lead with the first draw or "expected" defeat for Atletico, who suffers from the injury of the two most prominent scorers (Suarez and Llorente). ), And he is seeking to score his first goal in El Clasico since 2018.

Messi always succeeded in achieving his goals at the Santiago Bernabéu, where he won 12 times and scored 15 goals, but this time the confrontation at the Alfredo Di Stefano stadium for the first time, and the Argentine star certainly wants to register a new stadium to add to his long list.

Best season for government with royal

Benzema - who the fans called him "the government" due to his close proximity to the club's management - scored 12 goals in 15 games since the beginning of this year, including 10 goals in the League, but he did not score against Liverpool on Tuesday, although before that match he scored in 7 matches. A streak, which is the best he has achieved as a player at Real Madrid.

Who will be the decisive in El Clasico?

Getafe, Valencia, Atletico Madrid, Elche, Atlanta, Celta Vigo and Eibar were all victims of Benzema, as he scored 9 goals in the seven matches with those teams.

Summary of the "Real Madrid" double against "Eibar" in the match starring Karim Benzema and Marco Asensio 📺 # RealMadridEibar 2-0 pic.twitter.com/PuZfXIp3xC

The French star scored 24 goals in 34 games this season, which is his best average of goals in every match since joining the club.

If he continues to score at this rate, he will surpass his best season, in which he has scored 32 goals under Jose Mourinho.

Benzema's goals brought Real Madrid back to the LaLiga title race, and brought it closer to the semi-finals of the Champions League as well.