The coalition and the Yemeni army shoot down two Houthi “marches”

The air defenses of the Arab coalition forces to support legitimacy in Yemen were able to intercept and destroy an explosive march launched by the Houthi militia towards civilian objects in the Kingdom of Saudi Arabia, while a Houthi march was shot down on its way to target the Al-Jufina camp for the displaced in Marib, with 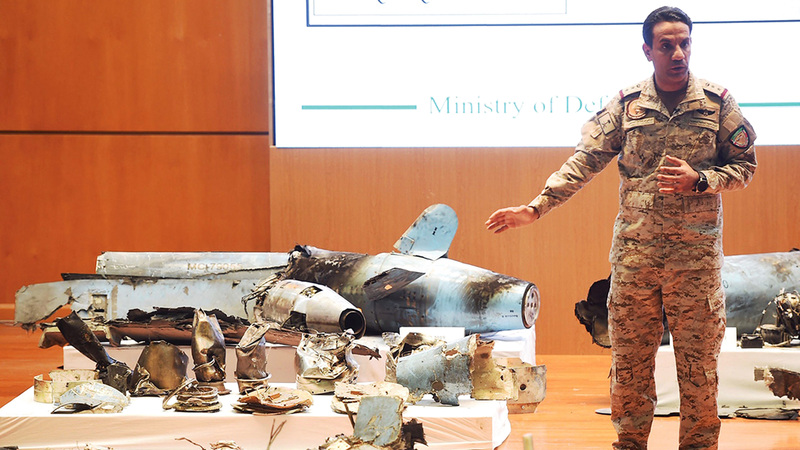 Militias continue to violate the armistice in the West Coast

The coalition and the Yemeni army shoot down two Houthi “marches”

The air defenses of the Arab coalition forces to support legitimacy in Yemen were able to intercept and destroy an explosive march launched by the Houthi militia towards civilian objects in the Kingdom of Saudi Arabia, while a Houthi march was shot down on its way to target the Al-Jufina camp for the displaced in Marib, with the continuing battles on the Al-Mashjah and Al-Kassara fronts, in When violations of the armistice continued on the West Coast.

In the details, the Arab Coalition to Support Legitimacy in Yemen announced, the day before yesterday, the interception and destruction of a booby-trapped plane launched by the terrorist Houthi militia towards the Jizan region in southern Saudi Arabia.

The Arab coalition said: "These are hostile attempts to target civilians and civilian objects by militias, and are considered war crimes."

The coalition affirmed that it is taking the necessary operational measures to protect civilians in accordance with international humanitarian law.

For its part, the Yemeni army announced that a Houthi militia drone had been shot down in the Marib governorate, indicating that "the Special Security Forces managed to shoot down an explosive UAV belonging to the Houthi militia, west of Al-Jufinah camp for the displaced, west of Ma'rib."

It is noteworthy that this plane was the second downed by the army in the Marib governorate, this week, when it managed to shoot down a drone last Sunday, on the Jadaan front.

For its part, the fighters of the Arab Coalition to Support Legitimacy carried out a series of air strikes on Houthi militia sites and reinforcements in various combat fronts in the Marib Governorate, according to field sources, confirming that more than 15 air strikes were carried out on Houthi militia sites and military reinforcements in Sorouh district, west of Ma'rib, and reinforcements were targeted. Houthi forces on the road linking Al-Jadaan and Al-Mashajeh and destroyed them.

According to the sources, the coalition fighters have targeted, with air strikes, several Houthi sites and gatherings in the district of Madghal, in the northwest of the governorate, and air strikes have also been launched on Houthi sites and gatherings in the Jabal Murad district, which have destroyed combat vehicles and killed and wounded many Houthis.

In Marib, the Yemeni army forces and the tribes, backed by the joint forces and coalition fighters, regained a number of locations in the west of the governorate, after fought fierce battles with the Houthi militia, which left many dead and wounded on both sides.

Field sources confirmed the liberation of the areas of Dash al-Enkhun, al-Suhail, and al-Atif in the Kassara front, after it launched a massive attack on the Houthi sites in those areas and inflicted casualties on them, including prominent field leaders, referring to the killing of the Houthi leader, the leader of the recent attack on Kassara, whose name is “Abu Saleh.” », With dozens of Houthis in the Al-Mashjah front.

The sources pointed out that the battles in Al-Kasara and Al-Mashjahh came after the arrival of qualitative reinforcements for the army forces from the 203rd Brigade and the 314th Brigade, reinforced with weapons, and after the approval of the attack plan approved by the Yemeni army chief of staff and the commander of joint operations, Lieutenant General Saghir bin Aziz, during his recent visit to the front lines. On those fronts.

A statement by the Yemeni army stated that the battles of the past two days in western Marib came in implementation of an offensive plan aimed at defeating the militias beyond Al-Kisarah and Al-Mushajeh, and it came with great support from the coalition fighters and Apache Air Force, who participated for the first time in those fronts, which resulted in great losses among the Houthis and their combat mechanisms. .

The army and tribes forces were able to secure the areas of Hama Al-Sayd, Malbouda, Jabal Al-Atif, and Iidat Al-Ra'a, in the Al-Mashjah front, after reinforcing that front with military units and special combat vehicles, while it made a qualitative breakthrough in the Al-Kasara front, after it retook the Al-Suhail area and Wadi Al-Suhail.

On the other hand, field sources in western Marib confirmed the arrival of Houthi reinforcements consisting of 2,000 of their armed elements to the head of Mount Helan, to start a new battle on that front, after they failed to achieve any victories during the past months on the Al-Mashjah and Al-Kassara fronts, indicating that these The operatives were smuggled on motorcycles during the past 10 days for fear that the coalition fighters would target their combat vehicles.

She added that other reinforcements were also pushed from Saada, Amran, Dhamar and Ibb to the al-Mashjah and al-Kassara fronts, confirming that the reinforcements were collected in Arhab areas, and the Khalqah market in the Nehm district, northeast of the capital, Sana'a, and others came from the Al-Jawf Junction side.

In addition, information found on the phone of one of the Houthis killed in the Ma'rib front revealed the size of the losses the militias have incurred since their attack on Marib during the past three months, where more than 6000 Houthi fighters were killed or wounded.

In Saada, the army forces supported by the coalition were able to carry out a qualitative military operation in Haydan district, the birthplace of Abdul-Malik Al-Houthi, the leader of the Houthi militia, which was represented by targeting the headquarters of "management, control and control" during a meeting of a number of Houthi leaders and foreign experts, which led to the destruction of the headquarters, death and injury. Many Houthi leaders.

Sources stated that the attack involved guided missiles, after monitoring the movements of the Houthis and experts in the building located in the Jumah bin Fadel area in the Haydan District, which was completely destroyed, while a weapons store containing drones was destroyed in the Maran area of ​​the same directorate, by the Arab coalition fighters. Which targeted a Houthi site in the Bani Sayah area of ​​the Razih district, which borders Saudi Arabia.

In Al-Dhalea, the joint and southern forces were able to target Houthi reinforcements in the Shakhab area in the Al-Hasha district, which were on their way to the western fronts of the governorate, after they were brought in from the governorates of Dhamar and Ibb, according to field sources, confirming the death and injury of many Houthi fighters, and the destruction of combat vehicles In the offensive.

The market in the city of Qataba, north of Al-Dhalea, witnessed clashes between Houthi elements, against the backdrop of their failure to achieve any penetration of the northern and western fronts of Al-Dhalea, during the past few days, despite the fact that they brought in large reinforcements to the governorate.

Local sources confirmed that many Houthis were killed and wounded in the clashes that came against the backdrop of exchanging accusations with them over the background of their failure on the Al-Fakher and Meris fronts.

A market in the city of Kitab in Ibb governorate also witnessed similar clashes between Houthi elements, leaving five dead and seven others injured, due to a conflict fueled by the Houthi militia.

In Hodeidah, on the western coast, Houthi militias targeted residential villages in the Al-Faza area of ​​the At-Tuhayat District, south of the governorate, with medium weapons, and fired at civilian objects in Al-Durayhimi district, south of Hodeidah, prompting the joint forces to respond to the sources of fire with focused strikes targeting militia barracks, causing casualties. Directly in its ranks.

The joint forces had observed four Houthi militia reconnaissance aircraft flying over the districts of Hais and Tuhayat, south of Hodeidah, carrying out espionage actions in preparation for the escalation of their military operations, and their attempts soon failed in the face of the strength of the joint forces.

- The destruction of a weapons depot containing Houthi drones in the Maran area of ​​the same directorate by Arab coalition fighters.