The court did not believe the explanation that the life-threatening incisions had come from the fragments of the toilet bowl. 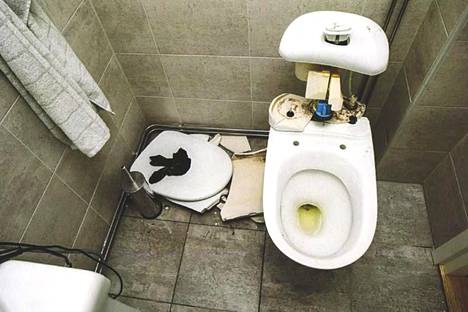 The whole gigantic Katiska tangle originated from a broken toilet bowl and the subsequent stabbing.

The stabbing took place in an apartment on Katiskapolu in Vuosaari, Helsinki, on Christmas Day, December 25, 2018. It was precisely because of the scene that the police gave the drug investigation the name Katiska.

Satimi had a bigger catch than the police initially imagined.

But at first there was only a bloody and half-naked man lounging confused along the paths of winter Vuosaari.

The older couple walking the dog wondered to see and called the police.

Police found the incident apartment and the intoxicated party there.

Drugs and doping substances classified as drugs were found as gifts in the apartment and garage.

As their origins were clarified, a tangle began to unravel, which eventually led to the revelation of a league led by Niko Ranta-aho and Janne Tranberg.

There were Ksalol tablets in a plastic bag in the utility room of the apartment.

In the garage you could find e.g.

The stabbing was preceded by a confusing chain of events.

The five-person party had ended up from the bar on to the apartment of Fagerström and this girlfriend.

- Only liquor was in mind, now we drink.

I hadn’t drunk for many years, the 39-year-old victim told the court.

Cocaine was sniffed on top.

From then on, the parties' reports are partly confusing and partly divergent.

It was agreed that at some point the victim turned off or otherwise lost consciousness in the toilet of the apartment.

When he woke up the toilet bowl was shattered.

Water flowed along the floor.

According to the victim, he was beaten and intimidated with an air gun, and a fist iron was also on display.

- I personally did not hit at all, I just took my throat, the victim said in court.

The half-naked, shirtless victim went to the yard.

He was locked there.

The victim tried many times back inside, but was always tucked back out.

Fagerström in particular lost his temper.

“Then Osku flippas,” the girlfriend communicated the apartment to her friend.

“I just tried to call for help and I didn't listen.

The murder charge would have been received if I had not intervened ”.

Police found a fist in the apartment.Photo: Police pre-trial report

The victim himself was of the opinion in court that he was not stabbed.

He thought he had wounded the toilet bowl from shards of porcelain or perhaps when he fell on the yard grill.

- There is no other logical explanation than that I have fallen into the toilet.

I don’t remember, but at least I don’t think the knife has been hit, the victim said.

According to the medical report, the victim had two sharp-edged deep wounds below the level of the right nipple, one of which extended through the pleura into the lung cavity.

There was an incision in the back.

According to the expert witness, it was impossible for the injuries to have arisen from the fragments of the toilet bowl.

The barbecue was not a credible explanation either.

According to the district court, there was no significant doubt left about the stabber.

It was an attempt at killing because it was completely random that things weren’t going to get worse.

There were traces of blood in the backyard.Photo: Police pre-trial report

In the Katiska tangle, Fagerström and his girlfriend belonged to the so-called Järvenpää group, which was not in direct contact with Ranta-aho, but distributed materials organized by him to Finland.

He had beaten the victim of Vuosaari in connection with a stab.

The Helsinki District Court handed down a verdict in the massive Katiska case on Thursday.