The UAE has expressed its strong condemnation and condemnation of the Iranian-backed terrorist Houthi militia's attempts to target civilians and civilian objects in a systematic and deliberate manner in the city of Khamis Mushait in the sisterly Kingdom of Saudi Arabia, through a booby-trapped plane, which was intercepted by the Coalition Forces. 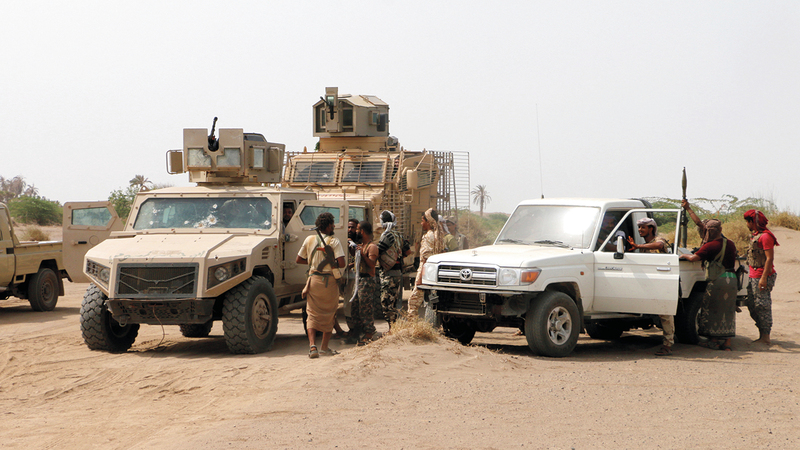 Elements of the joint forces on the western coast of Yemen.

The UAE has expressed its strong condemnation and denunciation of the attempts of the Iranian-backed terrorist Houthi militia to target civilians and civilian objects in a systematic and deliberate manner in the city of Khamis Mushait in the sisterly Kingdom of Saudi Arabia, through a car bomb, which was intercepted by the coalition forces.

In a statement issued by the Ministry of Foreign Affairs and International Cooperation, the UAE affirmed that the continuation of these terrorist attacks by the Houthi group reflects its blatant challenge to the international community and its disregard for all international laws and norms, and the Ministry urged the international community to take an immediate and decisive stance to stop these repeated acts targeting vital and civilian installations And the Kingdom's security, energy supplies and global economic stability, stressing that the recent continuation of these attacks is a dangerous escalation, and new evidence of the efforts of these militias to undermine security and stability in the region.

The Ministry renewed the UAE’s full solidarity with the Kingdom regarding these terrorist attacks, standing in one line with it against every threat to its security and stability, and supporting it in all measures it takes to preserve its security and the safety of its citizens and residents on its territory.

In addition, the Yemeni army and local resistance forces in Taiz governorate achieved strategic progress on the fronts of the Maqbanah district, west of the governorate, after they managed to control the strategic "Jabal al-Sen" overlooking the supply routes between the south and the north of the district separating the western coast from the western fronts of Taiz.

The commander of the Muqabneh front, Colonel Hamid al-Khulaidi, confirmed to "Emirates Today" that the army and resistance forces were able to control "Jabal al-Sen", after days of battles against the Houthi militia, which left many dead and wounded among the militias, indicating that the recent progress constitutes a major change. In the course of the battles in the west of the province.

Al-Khulaidi explained that the battles in Maqbana are close to completing liberation with the advance of the forces and the resistance across three axes towards the other Houthi strongholds in the district, from the front of "Rahnak, Jabal Al-Arf, and Jabal Al-Tuwair", and it has become close to the joining of the fronts with coming from the districts of Mawza and Al-Waziya The control of Jabal al-Sen, which is in the middle of the Maqabneh district, constitutes a painful blow to the militia presence in western Taiz.

He pointed out that the advance was made from the Al-Tuwair front and the control of Jabal Al-Sen was, and the battles were heading towards the advance towards Mount Draf on the outskirts of Al-Wazi'iyah Junction - Al-Barah. At the Mawza - Al-Waziyah Junction, the areas of "Jabal Qarqar, Al-Tatar and Hammam Al-Tuwair" have been fully controlled.

On the other hand, the army and resistance forces continued their advance in the Al-Ahkum front and Haifan, southeast of Taiz, and took control of several locations after battles against the militias that left 23 Houthi dead, in which four Houthi combat vehicles were destroyed, and a large quantity of weapons were spoiled.

In Marib, the Yemeni army forces and tribes supported by the joint forces and coalition fighters thwarted a major Houthi attack on a mountain directly overlooking the Sahn al-Jin camp. The militias also received a painful blow in the “Airport Tabat” overlooking the Sarwah market, west of Ma'rib, after the implementation of the army and tribes. A qualitative operation in the region led to the death of 34 Houthis, including prominent field leaders, including the field commander called "Khaled Yahya Al-Shami."

The coalition fighters launched 15 air strikes on militia sites in the vicinity of Marib, killing and wounding many Houthi fighters, in addition to destroying various combat vehicles, including vehicles and armored vehicles loaded with weapons.

Field sources in Marib indicated that the coalition fighters played a major role in thwarting the Houthi attacks on the city of Ma'rib during the past two months, as attacks on Al-Kasara, Al-Mujajah, Melbouda and Sarawah were broken, confirming that the survival of the city of Marib is safe, thanks to the armed forces of the Arab coalition.

The first pillar of the Sixth Zone Operations, Brigadier General Saleh Al-Bail, confirmed that "the military decisiveness and the great defeat of the Houthis is what will subject them to surrender and peace, restore legitimacy and end the coup."

In Hodeidah, on the western coast, the joint forces thwarted yesterday dawn an infiltration attempt by the Houthi militia towards the Hays district from the direction of the Saqm Junction, and infiltrators suffered great losses.

The militias renewed their bombardment of the Jaruba neighborhood, east of the At-Tuhayat district, south of Hodeidah, using various types of weapons, one day after the targeting of a residential neighborhood, leaving a state of terror and panic among the people, while four reconnaissance drones belonging to the Houthis were spotted in the sky of the directorate.

The joint forces monitored 72 new violations of the UN truce committed by militias against civilians, which were the bombing and targeting of their homes and farms with various types of weapons in several areas.

In Al-Dhalea, the joint and southern forces thwarted a militia attack from three axes towards the Al-Fakher sector under heavy fire cover.

• The Yemeni army is advancing in Taiz and controlling the strategic "Jabal Al-Sen".