In pictures ... an Afghani provides free education to girls at his home

Despite spending more than a billion dollars on the education system in Afghanistan, many people cannot get it, which is why a man in a remote village converted his living room for a semester to help the village girls get an education. Badikhil village is located in Khost B. 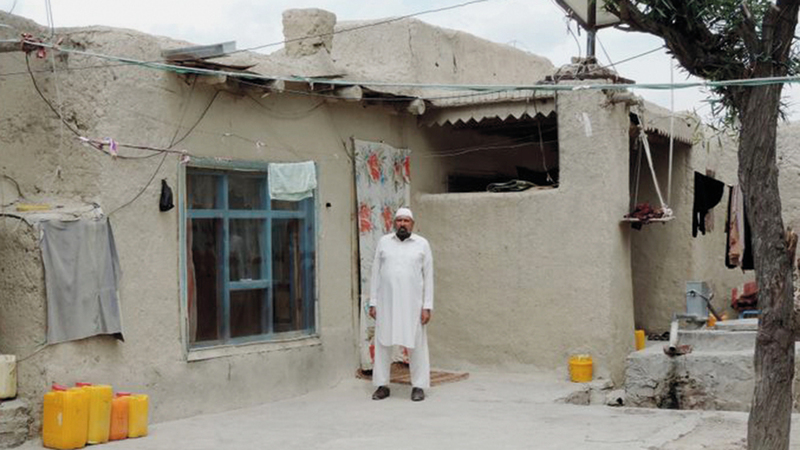 With scarcity of educational opportunities for women in Afghanistan

In pictures ... an Afghani provides free education to girls at his home

Despite spending more than a billion dollars on the education system in Afghanistan, many people cannot get it, which is why a man in a remote village converted his living room for a semester to help the village girls get an education.

Badikhil village is located in Khost province near the border with Pakistan, a long way from the capital, Kabul, and is home to about 250 families, including Habib Rahman, who was a pilot in the Afghan army until he started suffering from heart problems.

He returned to his village with his family and kept running a small school for girls, providing his lessons for free, and receiving about 30 students every day, and when the family's bedtime approached, he pushed the tables and chairs towards the walls and placed mattresses on which his family could sleep.

This is a special initiative in a country where the hard-line Taliban movement systematically oppresses women, closes girls ’schools, and bans them from all kinds of education and work, but at the present time even Taliban members active in the region send their daughters, sisters and nieces to Habib al-Rahman school, and he succeeded This man also convinced the other villagers who were skeptical at first.

The girls at the school learn accounting, history, geography, Islamic studies, and their mother tongue, Pashto, from morning until noon prayer, and once the noon prayer and school finish, there is a two-hour nap until lunch, as everything stops in Khost usually.

The concept of educating women has changed

Officially, the Afghan government is responsible for the region, but as is the case in most of the rural areas in Afghanistan, the authority of the "Taliban" is prevalent, and during the "Taliban" regime, none of the citizens imagined girls would go to schools where education was provided by women, let alone a school run by A man, but in the last twenty years this concept has changed completely in the villages.

Habib al-Rahman says that extremists from neighboring villages have no problem with his school, and Taliban fighters no longer have a presence in our village, but they encourage girls to go to school, and their education is important to them.

The girls ’school in Badikhil reflects the contradiction on the ground. While Taliban fighters send male students to school, some of them make threats against Habib al-Rahman.

The contradictory behavior of the Taliban

Observers and experts in the region are not particularly surprised by the contradictory behavior of the Taliban. According to a political anthropologist Urzala Nemat, who heads the Research and Evaluation Unit in the Afghan capital, Kabul, extremists were exhibiting similar behavior in the late 1990s.

"The Taliban were unable to convince their men of what the movement considers fundamentally un-Islamic decisions, such as closing girls' schools," she says.

There is also the fact that the current political leadership of the extremists resides abroad, and they may send their daughters to the air-conditioned schools and universities there.

There are not only schools in Khost now, but also a university, which Habib al-Rahman's two sons have enrolled.

"One of them is planning to become a doctor and the other an engineer," says Habib Al-Rahman. "They make me very proud."

His two sons sometimes buy new textbooks for their father's school from Medina, or they work there as substitute teachers.

University is also where Habib al-Rahman's students hope to end up.

Latifa, whose brother belongs to Taliban fighters, says: "I want to go to university one day. I want to become a doctor or teacher to serve my people."

And to do so, she will have to complete her education in the city.

Habib Rahman's lessons end only at the sixth grade.

Habib al-Rahman receives little support at his school with donations from the villagers. The problem of education in the villages of Afghanistan, after all, is not only caused by the Taliban and their extremist beliefs, but also by the negligence of the official authorities.

Habib al-Rahman wonders whether the government even knows that he runs a school in his home.

"A lot of people talk about schools and universities in the capital, but what about villages?" He says.

Between 2002 and 2015, the US government alone spent nearly $ 1 billion on the education system in Afghanistan, hoping to build hundreds of new schools and fill classrooms with female students, but instead a lot of money simply gets its way into the pockets of warlords and corrupt politicians. Many schools are completely empty even as the money keeps flowing to operate them.

Research by American investigative journalist Azmat Khan revealed that in 2015 the Afghan Ministry of Education was running at least 1,100 schools, yet the study was actually only being conducted in a small fraction of them.

There are schools, Khan wrote, which critics call "ghost schools," which exist only on paper to launder aid money.

In many cases, the number of girls studying in these schools is inflated through fake names in order to ensure the flow of Western money.

"Our school is real, but nobody seems to care about it," Habib al-Rahman said. "Western aid has never reached this part of Afghanistan."

He knows that this is unlikely to change in the near future.

Fear of the past

Since the United States reached a troop withdrawal agreement with the Taliban in February, it has been clear that the militant group will sooner or later win a share of power in Kabul in one form or another.

Many Afghans, especially those who live in urban centers like Kabul, fear a return to the dark days of the past, when a ban on women's education was imposed, although the government of Afghan President Ashraf Ghani, as well as the American negotiators, made it clear that they would not tolerate With such a transformation.

“Going to school was always difficult for Afghan women, but now I am optimistic that things will change gradually, and I am happy that I can go to school to learn a lot there,” said Mahbouba, a student of Habib Rahman.

At first, some of her family members opposed her going to school, and now she enjoys the support of everyone. "They encourage other relatives as well to send their daughters to school," she says.

From primary school to higher education, resources allocated to Afghanistan's education budgets are at risk, according to Transparency International.

Sources claimed that former officials in the Ministry of Education embezzled millions of dollars in education aid provided by the international community.

Plans to build new schools have been halted due to financial corruption, and this includes schools and teachers who do not actually exist except in the government's statements, as their dues go to corrupt officials.

Bribes are paid to amend school certificates, distribute textbooks, and establish schools, but what is more dangerous is the appointment of teachers on the basis of influence, favoritism and bribery.

It is known that teachers looking for jobs pay bribes of $ 1,000, equivalent to about five months' wages, and the Ministry of Education and Culture called for a set of methods to combat corruption, with a focus on the local and federal levels, and an emphasis on transparency and the effective implementation of laws.

The government has already tried to curb corruption in the education system by introducing stricter measures to obtain government jobs, including jobs in the Ministry of Education.

Nevertheless, there appears to be some progress. Schools have seen significant increases in student enrollment over the past ten years. Local governments have even negotiated with the Taliban to allow children to access schools in areas where the group still maintains power.

3.7 million children are out of school

While Afghanistan is making progress in improving access to education, some 3.7 million children remain out of school.

The year 2017 saw nearly half a million newly displaced people in Afghanistan, as well as an influx of more than 600,000 Afghans returning from Iran and Pakistan.

Droughts linked to climate change and other conflicts are pushing more people to migrate and undermining efforts to get more children into school.

More than half of the returning girls and boys are currently out of school due to the inability of schools to register additional children. There are also other problems represented in the lack of documents required to facilitate enrollment, cost factors, and language, gender and cultural barriers.

Education is largely provided on the basis of gender, with very few mixed-gender schools.

The lack of girls-only schools and female teachers is a major barrier to the education of 2.2 million girls who are still not out of school.

The Ministry of Education recently launched a girls ’education policy to remove barriers to education for all Afghan girls and women, to close the gender gap in school enrollment for girls and boys, and to include out-of-school girls.

In line with this policy, the program will focus on a wide range of actions, such as: creating safe school environments, including supporting community transportation for girls safely to school, supporting displaced girls and boys to obtain documents and education certificates, and reaching children, especially girls, in localities. In rural and isolated areas, developing and disseminating distance learning packages for hard-to-reach locations and communities, such as radio education programs and self-learning materials, and providing training for 20,000 teachers, especially female teachers.

• There are schools that critics call “ghost schools,” which exist only on paper to launder aid money.