Brazil is engaged in its campaign to combat the "Covid-19" epidemic in the midst of overwhelming chaos with a series of contradictory measures for schools, churches and restaurants, which are not clearly explained, and are subject to varying judicial rulings. This chaos comes at the height of the epidemic spreading in the giant country in South America, where the death toll exceeded 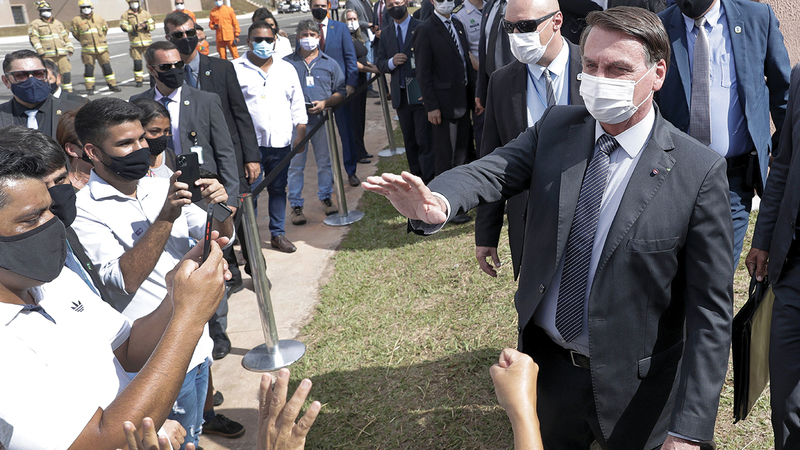 At the height of the pandemic

Brazil is engaged in its campaign to combat the "Covid-19" epidemic in complete chaos, with a series of contradictory measures for schools, churches and restaurants, which are not clearly explained, and are subject to varying judicial rulings.

This chaos comes at the height of the epidemic in the giant country in South America, where the daily death toll exceeded the 4,000 threshold for the first time on Tuesday, with 4,195 deaths recorded.

Brazil, with a population of 212 million, is the second country in the world, behind the United States, that has been most affected by the pandemic in terms of human losses, and the official number of deaths reached 336,947 thousand.

On Monday morning, Marcia Matos, a resident of Rio de Janeiro, was preparing to send her two-year-old child to nursery, when her friend informed her that resumption of activities had been suspended.

This suspension was decided by a judge the day before, canceling the municipal decree that dates back to last Friday, which had stipulated the reopening of educational institutions.

"It is confusing," she said. "The nursery did not alert us until after the time when we usually delivered the children. My son was very happy at the idea of ​​returning to meet his young companions."

If her friend had not called her, she would have been like many of the parents. She took her child to school, to no avail, as they did not inform them of the court decision.

A decision was finally canceled, on Tuesday afternoon, after an appeal filed by the municipality, but other judicial fluctuations could increase the confusion of the students' families.

"Here in Rio, we are caught in the middle of a political battle between the mayor and the governor, and this adds to the state of confusion," said Marcia Matos.

At the end of March, the mayor, Eduardo Pais, decreed the complete closure of bars and restaurants, but the governor of Rio de Janeiro, Claudio Castro, allowed them to remain open until 11:00 pm.

On the national level, the right-wing president, Jair Bolsonaro, continues to criticize the restrictions in the name of job preservation.

It is an anti-lockdown rhetoric that contradicts the recommendations of most specialists who consider that economic recovery will not be truly possible until after the health situation is under control, which is currently elusive in Brazil.

"Without national coordination, without a Ministry of Health directing how to confront the epidemic, there is a big legal void," Jose David Orbayz, from the Center for Infectious Diseases in Brasilia, told «AFP»: «There is no clear definition of activities in all parts of Brazil. Which must be considered (basic), each city, each state, determines in its own way what may remain open or not, pursuant to local political and economic pressures, so the situation is so chaotic to this extent.

A year ago, the Supreme Court decided that states and municipalities have the right to impose their own measures in an attempt to stop the spread of a virus that President Bolsonaro described as "simple flu."

The head of state often invokes this autonomy in decisions granted to states and municipalities, in order to distance himself from the unorganized management of the health crisis.

But the Supreme Court clearly stated in its ruling that the federal government is not exempt from its responsibilities to "take action at the national level."

Churches are open on Easter

Saturday, on the eve of Easter, a Supreme Court judge recently appointed by President Bolsonaro decided to allow places of worship to open throughout Brazil, despite the ban in force in many cities, at the request of the Association of Evangelical Jurists.

But in another development, on Monday, Gilmar Mendes, another judge in the highest judicial body in Brazil, reimposed the ban in the state of São Paulo, and the situation was not clear until Wednesday, when the Supreme Court decided the matter in a public session.

And Jose David Orbeez stressed that "intensive resort to the judiciary is a direct result of the lack of national coordination, with firm and transparent decisions being taken."

Legal battles also extended to the world of football, the source of great passion in the country, with a series of contradictory provisions permitting or not to organize matches within the framework of local or international competitions.

This is the case of the Recoba competition, which is equivalent in South America to the European Super Cup, which is supposed to be held finally, on Sunday, in Brasilia, unless the courts decide to intervene again.

• The second country, Brazil, with a population of 212 million, is the second country in the world, behind the United States, most affected by the pandemic in terms of human losses, and the number of deaths officially reached 336,947 deaths.

• On the national level, the far-right president, Gair Bolsonaro, continues to criticize the restrictions in the name of job preservation.