Al-Sisi warns Ethiopia: Do not touch a drop of water that belongs to us

Yesterday, Egyptian President Abdel Fattah El-Sisi warned Ethiopia against infringing Egypt's share of the Nile’s waters, saying: “Do not touch a water point that is our share, because all options are open.” While Sudan confirmed that options are open to it on the issue of the Renaissance Dam, including asylum To the Security Council. And in detail 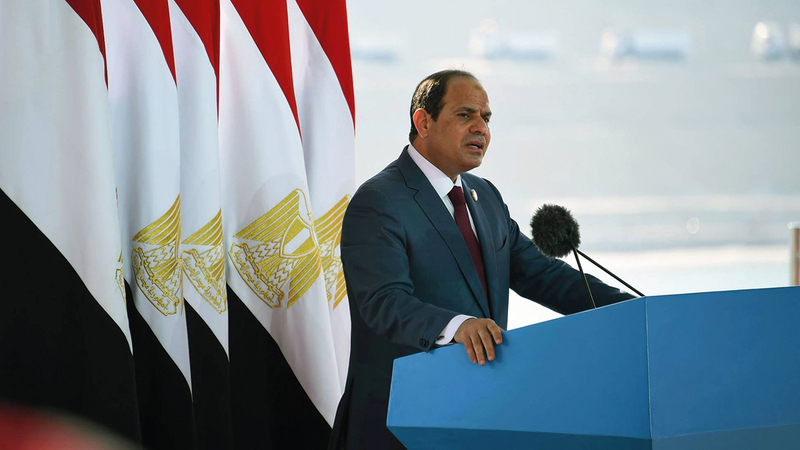 Al-Sisi warns Ethiopia: Do not touch a drop of water that belongs to us

Al-Sisi confirmed that negotiations with Sudan over the dam are continuing.

Yesterday, Egyptian President Abdel Fattah El-Sisi warned Ethiopia against infringing Egypt's share of the Nile’s waters, saying: “Do not touch a water point that is our share, because all options are open.” While Sudan confirmed that options are open to it on the issue of the Renaissance Dam, including asylum To the Security Council.

In detail, Al-Sisi said, during his inauguration yesterday, of the “Smart and Secured Publications Complex” in the Administrative Capital, east of Cairo: “I say to Ethiopia, do not touch a water point that is our share, because all options are open to us.”

He added that negotiations with Sudan about the dam are continuing, adding: "We respect the development plans in Ethiopia, but without causing harm to Egypt."

He added, "I follow public opinion and communication sites, and I see that there is concern about the water file, and frankly the people's concern is worthy and legitimate," adding: "The people have the right to worry about the water issue, and I also feel anxious."

He said, “Your concern is deserved and legitimate.

I have been worried about the water since 2011, I have been no longer comfortable or reassured since 2011, specifically since January 25, when I learned that we will have a very big problem. ”

He emphasized that the Egyptian state’s position on the Renaissance Dam project was an honorable one, and the peoples ’desire for a form of development was respected.

Earlier, the Egyptian Minister of Foreign Affairs, Sameh Shoukry, said yesterday that Ethiopia is "trying to evade responsibility in the Renaissance Dam file", indicating that Egypt will take all measures to protect Egyptian water security "in the appropriate time", if it is established. Ethiopia, for any "irresponsible behavior."

"Ethiopia is always striving not to reach a binding agreement on the Renaissance Dam file," Shukry added in televised statements.

He said, "Ethiopia is aborting any negotiations on the dam, and we did not receive an invitation regarding negotiations again at the end of this month."

Shukri described the Ethiopian waving of filling the dam as “a unilateral act that does not respect international law, and confirms intransigence and an attempt to impose will;

This point is very dangerous, and filling the dam without a binding agreement is a dangerous step. ”

The Egyptian minister stressed that Egypt and Sudan "will not allow harm to happen to them."

In Khartoum, the Minister of Irrigation and Water Resources, Yasser Abbas, said yesterday that all options remain open to Sudan on the issue of the Grand Ethiopian Renaissance Dam, including resorting to the Security Council.

The Sudanese News Agency (SUNA) quoted Abbas as saying, in a press conference yesterday, upon his return after his participation in the Kinshasa negotiations regarding the Renaissance Dam, that the process of filling the dam without an agreement directly threatens Sudan, and endangers the lives of 20 million citizens living below the dam.

He pointed out that this saying is not a matter of propaganda and media intimidation, but rather a description of the facts, as the storage capacity of the Rossaires reservoir is seven billion cubic meters, and it is only 15 kilometers from the Renaissance Dam, while the storage capacity of the Renaissance Dam is 74 billion cubic meters.

He explained that Sudan called for the participation of South Africa, the European Union, and the United Nations, along with the African Union, within the framework of a quadripartite mediation group headed by the African Union, in order to expand the participation base of friendly countries in order to demonstrate the seriousness of the situation Sudan is facing due to the filling operations of the Renaissance Dam. Without prior agreement.

He denied that Ethiopia had offered Sudan a bilateral agreement in any form.

On the other hand, Ethiopia confirmed yesterday that it is determined to continue filling the huge Renaissance Dam that it is building on the Nile River, despite the ongoing dispute with Egypt and Sudan.

The Ethiopian Minister of Water, Seleshi Bekele, said yesterday that his country will continue to fill the dam's reservoir, which has a capacity of 74 billion cubic meters, during the next rainy season, which is supposed to start in June or July.

"As the construction progresses, the dam will be filled," the Ethiopian minister said in a press conference.

"We will not give up on that," he added.

Silesi expressed his regret that Egyptian and Sudanese negotiators sought in Kinshasa to increase the participation of observers from South Africa, the United States and the European Union.

Ethiopia opposes this, citing the need to prioritize the process led by the Presidency of the African Union, which is based in Addis Ababa.

Earlier, Ethiopia confirmed that it was committed to completing the negotiations on the Renaissance Dam within the framework of the African Union.

Addis Ababa accused Cairo and Khartoum of seeking to "undermine the process led by the African Union and take the issue away from the African platform."

They also obstructed the resumption of negotiations by rejecting a draft final statement that included deliberations during the two days of the meeting. Instead, the two countries attempted to obstruct the process.

This comes at a time informed Sudanese military sources said that the Sudanese army responded, the day before yesterday, to the attempt of Ethiopian militias to penetrate into Sudanese territory.

She explained that "the Sudanese forces were able to expel the militias and farmers from the Ethiopian settlement of Marsha, which is located within the Sudanese borders."

• Addis Ababa accuses Cairo and Khartoum of seeking to "undermine the process led by the African Union and take the issue away from the African platform."